McCarthy's Speakership and the "Crisis of Democracy"

The multiple ballots were, at worst, a trivial and amusing contretemps. 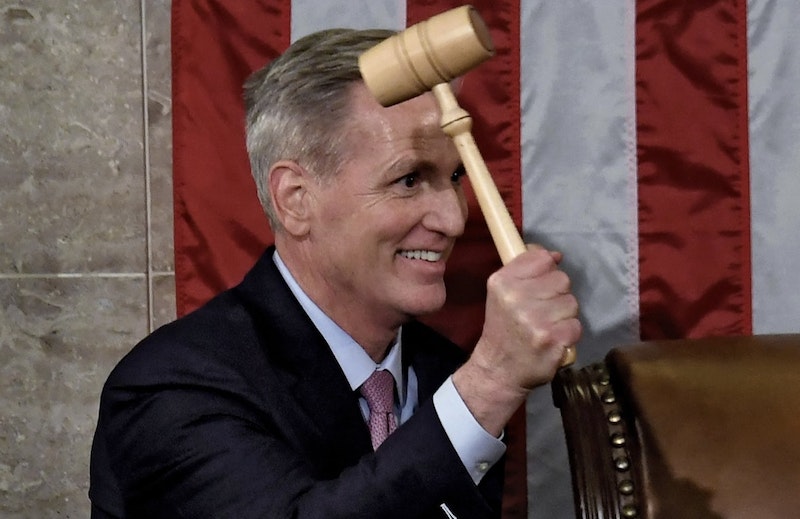 Post-Trump, and two years after the insurrection, people are really having trouble calming down. Last year, some like Dana Milbank of The Washington Post warned us that democracy would be lucky to survive the midterms. Perhaps the panic had some basis in reality, though the worst outcomes (Mastriano in PA and Lake in AZ, for example) were avoided. It's getting hard to tell, however, because for Milbank as for so many others, any little glitch or amusing trivial contretemps also constitutes a crisis of democracy. They experienced January 6 as trauma (though it was an experience they had on television, as it happened to other people), and have written columns out of the PTSD ever since. Now any little noise puts them in flashback.

It may strike you that the wrangling in the Republican caucus that led to a three-day delay in Kevin McCarthy's assumption to the speakership at worst constituted a minor glitch. Also that the procedure was pretty democratic. It doesn't usually take that many ballots. So what? It was "insurrection by other means," says Milbank. Definitely other means, replacing bear spray with voting. What can he possibly be talking about?

This was, for all these little people, a unique and peculiarly extreme event. As Katherine Miller pointed out, gearing up for the head explosion, it had only happened 15 times before. "The whole thing was like a hallucination," she says. My hallucinations are a lot more dramatic and interesting. Holding multiple ballots for Speaker, according to Miller, is "the politics of nihilism." One thing all these commentators evidently affirm with their great souls, one thing they have in common with Lauren Boebert: their taste for name-calling.

The “crisis of democracy,” as in the 2022 election, turned out to be an effective campaign issue for Democrats, and a vocabulary and structure of tropes has emerged around it. “Denialism,” for example, made its way from the Holocaust to climate change to the 2020 election. The reason to deploy it, over and over and over, is precisely to associate one's opponents with genocide. It's like “groomer” in that regard: just an attempt at max manipulation. The reason that democracy will be in crisis all the time no matter what happens from now on is just the rhetorical momentum; no one will let the rhetorical world they've developed disintegrate, primitive though it is. So they'll apply it to anything. More "big lies" are coming.

"To save himself, Kevin McCarthy just destroyed the House," writes Milbank, thinking or wishing that McCarthy was the Q Shaman. It looked to me more like he assumed the leadership of the House in the conventional fashion, and banged his big new gavel with a grin on his face. "This is what happens when a political party, year after year, systematically destroys the norms and institutions of democracy," Milbank continues. "This is what happens when those expert at tearing things down are put in charge of governing." This, this is what happens. This iswhere all the denialism and insurrection and nihilism haveculminated: in multiple rounds of voting for Speaker of the House, now squared away.

The worst part of it is, I guess, that McCarthy "agreed to allow any member of the House to force a vote at will to 'vacate' his speakership—essentially agreeing to be in permanent jeopardy of losing his job." Milbank's concern for McCarthy's future is admirable, if a trifle surprising.

But what's interesting is that this implausible slop finds a large audience to whom it feels true. I picture tens of thousands of people nodding along as it just gets more and more ridiculous. Any horseshit is good enough horseshit when it's your side's horseshit. I think you’re all just waving your arms and running around in circles screaming. There's nothing in there to believe or fail to believe, just some sort of involuntary emotional expression, an inarticulate yet manipulative groan.

The Times hired an historian, Joanne B. Freeman, to make the same point that Milbank made 23 times in 1000 words: this was no joke. (Rather, this was "chaos," "anarchy," "insurrection," etc., despite all appearances.) The historical argument, such as it is, goes like this: You might not think it's bad when the Speaker contest goes to multiple votes. But it was bad, or sort of bad, or a symptom of difficulties, when Speaker votes went to multiple ballots in the 19th century. Slavery was the issue then. The House went through periods of real dysfunction. We need to "learn the lessons of history."

So, this is like slavery, and the 1855 speaker contest took over 50 ballots! On the other hand, according to the historian, it led to an anti-slavery speaker. Perhaps the votes were worth it, after all. There’s no reason to think that the people making multiple speaker ballots happen will always be your opponents, the sort of people you toss “insurrectionist” or “denialist” at. Nancy Pelosi came close to the same problem two years ago with her progressive caucus. Freeman does point out that the current disagreements are much less substantive than in 1855, that much less is at stake in terms of actual policy. Definitely. What lessons can we draw from 1855? Don't do that? Thanks.

So, Milbank, if multiple ballots lead to speaker AOC in the fullness of time, will you still characterize it as "chaos," "insurrection by other means," "a potentially fatal crisis for democracy"? I think you denialist denialists need to pick your spots. When every disagreement is an insurrection, insurrection doesn't seem that bad.