Only the Freedom Caucus has a grip on reality. 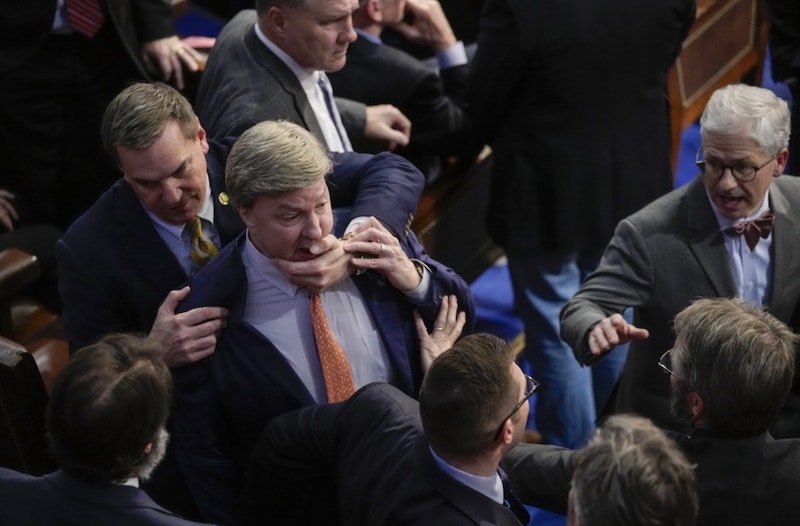 Hey, if you suddenly decided last week that it was vital the tiny handful of Republican members of Congress known as the Freedom Caucus stop objecting and make Rep. Kevin McCarthy their Speaker of the House, congratulations! You, Donald Trump, and the whole political establishment were finally on the same side about something. And if that makes you feel good, that should be your first sign there is something wrong—with you!

What’s right about the Freedom Caucus, by contrast, is that their persistence in opposing McCarthy—or pressing him for concessions that shouldn’t even require much pressure, or that much conservatism, such as agreeing simply to hold a vote at some point on a balanced budget amendment—shows the populist-conservative sentiment of recent years isn’t merely a pro-Trump personality cult.

It endures and thrives without him, and if it focuses more on the fiscally-conservative things the Republican Party should be doing anyway, like budget cuts and tax cuts, that’s fantastic. The whining Republican establishment should see those things as a return to their proper business, not just confirming a Speaker for the sake of keeping the wheels turning (and continuing to kick the fiscal can down the road, to mix metaphors). Long live the anti-establishment mood, even when the pro-Trump mood is long forgotten—or when he comes to be remembered as part of the establishment he promised to fight.

If McCarthy doesn’t end up at least letting the House hold votes on the things the Freedom Caucus cares about (not that I even share all their priorities), maybe the best revenge they could exact would be to defect en masse to the Libertarian Party.

A few Twitter users expressed the hope that Rep. Justin Amash, who went from Republican to Libertarian toward the end of his 10 years in Congress, might be picked as the Speaker if no consensus formed around McCarthy or anyone else currently in office, and there was absolutely no chance that was going to happen, but the idea of defaulting to libertarianism when the right and left can’t get along is a pleasing one. I seem to recall libertarian philosopher David Schmidtz briefly running a tenure committee at Yale because the Continental philosophy and Anglo-American philosophy factions were otherwise deadlocked.

The Freedom Caucus isn’t exactly libertarian, but before anyone—right, left, or libertarian—dismisses them as wholly un-libertarian, it’s worth noting that while they were foot-dragging about approving a Speaker, they werechastised by critics not just for bringing normal House of Representatives business to a halt (a libertarian achievement in itself, despite what some of the born-again enthusiasts of smoothly-running liberal institutions etc.might tell you lately) but for insisting that a panel be convened to investigate abuses by the FBI and other law enforcement agencies and that the military budget be cut. Sometimes the people farthest right are also the most libertarian—sad and slim as the pickings may be in general by libertarian standards.

In a strange upside-down-and-backwards version of those developments, Trump has for the first time said he might run as a minor-party candidate in 2024 if the Republicans won’t have him—which lends slightly more credibility to that briefly-floated conspiracy theory about the Libertarian Party sounding slightly-more-Trumpy lately because some in the new party leadership might love it if Trump joined and led them. It would be bizarre but entertaining.

And before some of my more old-fashioned libertarian colleagues flip their lids at me even jokingly countenancing such a tactic, I should say it’s not a development I’d regard as ideal—but they should keep in mind, before they fall into the trap of treating mainstream politics-as-usual as morally acceptable, that mainstream political thinking results in things like the conservative site Bulwark lamenting the Freedom Caucus’ delays because the House was unable to appoint committee heads for several days and that supposedly creates a “national security threat” by compromising our panther-like military readiness.

Oh, please. And they wonder why some of us are starting to forget how conservatives and communists supposedly differ.

Meanwhile, jerk Garry Kasparov wants what he explicitly likens to 1950s (Joe) McCarthy hearings for those opposing the current (Kevin) McCarthy, saying the Freedom Caucus’calls for defense cuts are treasonous—and show they and their boss at Mar-a-Lago (despite him backing the current McCarthy) take orders from the Kremlin and that they all hate Ukraine. And hawkish John Bolton (who Trump appointed, remember!) says he’s so fed up with the U.S.’s supposed aversion to militarism that he’s running for president, roughly the last thing we need. Oddly, though, he too has claimed to be mostly-libertarian in the past and now says he’s moved to run not by a thirst to bomb but by Trump’s contempt for the Constitution.

But even if we’re lucky enough to evade being ruled by the populist rowdies, the militarists of the right, the complacent big spenders of the center, or the hyper-regulators of the left, civilization will still find itself up against RINOs like this ex-congressional guy writing at CNN, whining how heartbreaking it is when the government can’t get its oh-so-productive work done. His penultimate paragraph there is a hilarious failed attempt to make democracy sound nice. At least he kept it more civil than current Congress member Dan Crenshaw, another ostensible Republican, who called the Freedom Caucus holdouts “terrorists.” Classy. He apologized but may have been denied a committee position because of his outburst. Congress takes insulting Congress pretty seriously, for good or ill.

With only slightly less vitriol, (Trump-endorsed) Rep. Tony Gonzales of Texas, purportedly a conservative state, called the Freedom Caucus the “insurgency caucus.”Conservatives putting up with self-hating anti-movement saboteurs like him is as baffling to me as, well, Matt Drudge continuing to link to nearly everything written by columnist Matt Labash, who seems to be on a mission now to bludgeon us all with enough snark to turn us into moderates. (Labash here approvingly quotes John Boehner, of all the swamp beasts out there, who, rather like Crenshaw, calls the Freedom Caucus terrorists. Boehner adds that J6 made him want to cry, as if that takes much effort.)

As summarized by podcaster Jameson Ellis, when the Speaker confirmation scuffle began, “The House Freedom Caucus members asked McCarthy to hold votes on a balanced budget, the Fair Tax Act [which would abolish income tax and the IRS], the Texas Border Plan, and term limits for members of Congress but he refused.” That’s how far removed congressional Republicans are from instituting a conservative policy agenda, fearful of even holding a vote—in just one house of the legislature—that might put them on record admitting they oppose their constituents’ most basic political hopes. Conservatism, in both its mainstream and populist forms, is pretty useless—and I’d prefer there be no government at all—but the Freedom Caucus heroically nudged things just a bit more in the right direction.