Skip omens of an apocalypse. 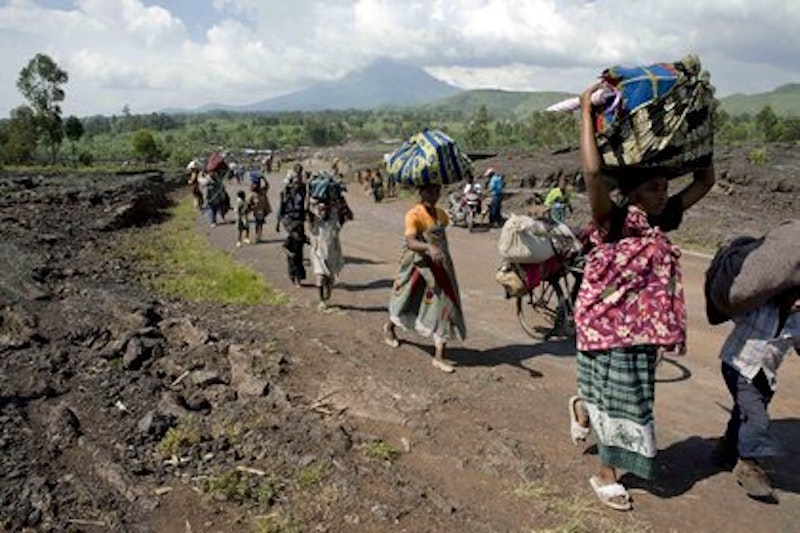 There’s a massive dislocation of entire populations occurring around the globe that far outnumbers the 63,000 women and children refugees parked at America’s doorstep. War, famine, drought and brutal terrorism are creating a borderless world in which many uprooted and newly displaced ethnic groups are forgoing their identities and immersing themselves in new and alien cultures in foreign lands as a means of survival.

Religionists no doubt interpret the newest Diaspora as an omen of Apocalypse, the end of time as foredoomed in the Book of Revelations. But the will of the Almighty, as many fundamentalists would claim, has nothing to do with man’s inhumanity to man and the nefarious deeds we commit in the name of God in an attempt to shift the blame. Better to assign guilt to religious fanatics, brutal dictators, homophobes, rapists and violent gangs instead of some uninvolved deity, whether to Jesus, Moses or Mohammed.

The United Nations estimates that there are 51.2 million displaced people worldwide, exceeding 50 million for the first time and an increase of six million over the previous year. The greatest number by far is in Africa, where half the world’s displaced people are wandering in search of food, water and personal safety.

There are 12.5 million displaced persons in 21 sub-Saharan countries, with the greatest concentration in Nigeria, the Democratic Republic of Congo and Sudan. In another threat to populations, the World Health Organization reports that there are 1779 cases of Ebola in Guinea, Liberia, Sierra Leone and Nigeria, and 961 deaths from the disease so far. There are 10 billion people on the planet.

In the nightly pyrotechnical glare of rockets and other deadly missiles, an estimated 250,000 Palestinians have been displaced out of Gaza’s total population of 1.8 million residents in the current give-and-take shelling between Israel and Hamas. (A cease fire may or may not be in effect when this appears.)

And under the iron-fisted rule of Bashar al-Assad, in a visible display of merciless genocide and displacement, more than nine million Syrians—40 percent of that country’s pre-war population—have been uprooted and forced from their homes, towns and villages. About 2.5 million are living in neighboring countries such as Turkey and Lebanon and 6.5 million have been forced to move or wander internally, according to the UN Refugee Agency.

The fighting in Syria has also drawn Lebanon into its neighbor’s civil conflict. Some residents tried to flee the Lebanese boarder town of Arsal, home to 40,000 residents and 120,000 Syrian refugees, according to reports.

Millions of Syrians from the desolate North Country were forced earlier by drought and famine to move to that nation’s largest cities. Assad’s hard-hearted neglect of their appeals for help led to the Arab Spring uprising and the reactionary government crackdown and murder by gas and bullets that forced migrations to other countries and parts of Syria beyond Assad’s interest or reach. More than 170,000 Syrians have been killed since the bloody uprising against Assad began.

More than 80 percent of all refugees are women and children, or an estimated 15.2 million around the world. There are about 4.8 million displaced women and children in Pakistan and another 2.7 million in Afghanistan.

And just last week, a story appeared from out of nowhere about as many as 40,000 minority Iraqis trapped on Mt. Sinjar by Sunni militants. The choice of the stranded was to starve to death on the desolate mountaintop or to come down and face certain slaughter. Forty Yazidi children had already died. The Obama Administration, at the request of the Iraqi government, ordered humanitarian air-drops of food, water and medicine to the marooned Yazidis and targeted air strikes against the fanatic terrorist group, ISIS, and its rapidly advancing positions. The Yazidis are now fleeing across the Iraqi border into Syria.

At the same time, whole populations of Christians are on the run and being pursued by ISIS with demands that they have a choice between conversion to Islam or death. Many Iraqis prefer the extremist ISIS over the brutal Shiite-led government of Nouri al-Maliki, which is essentially a civil war between the Sunnis and the Shiites. Obama would like to replace al-Maliki with someone who could fashion an inclusive government among the Sunnis, Shiites and the America-friendly Kurds. Al-Maliki refuses to go quietly for fear of certain death without the protective bubble of power.

And in another religious war between Christians and Muslims, 935,000 people have been slaughtered in the central African Republican of Banqui, according to the UN. An advertisement placed in The Washington Post on the eve of last week’s gathering of African heads of state at the White House, stated that the terrorist group, Boko Haram, has “conducted more than 50 terrorist attacks that killed or injured more than 18,000 people,” including carrying out the kidnapping of “276 female students from a government school in Northern Nigeria.”

Africa and the Mideast are not the only areas of displacement and relocation. Makeshift boats from Africa regularly wash up on the shores of Sicily and on the Italian island of Lampedusa carrying cargoes of people seeking asylum or a better life. Last year, 42,000 Africans arrived at Lampedusa or other parts of Italy. The count so far this year is 60,000. Italy routinely sends the seafarers back to their native lands.

The ethnic war in Bosnia and Herzegovina, which produced two million refugees, has also helped to remake the faces of many towns and cities in neighboring Northern Italy. Not long ago a story appeared about a woman who returned from America to the Italian city where she was born and barely recognized her hometown because it had been repopulated by Muslims.

Another favorite landing point is Calais, along the French coast of the English Channel. So far this year, 1300 Sudanese and Eritreans have been intercepted at Calais who were hoping to cross the Channel for a better life in Great Britain. The UK, like other European nations, also suffers from the downside of its early years of colonization and occupation. Those former subjects, especially émigrés from Pakistan and India, are bona fide British citizens and often arrive to legally establish residence in Great Britain.

The 63,000 refugees seeking to relocate in America, mainly from Guatemala, Honduras and El Salvador, are almost an invisible fraction of the millions of nomads roaming the planet to save themselves as well as their families from one form of annihilation or another. The number of arrivals at the Texas border, though, has decreased sharply to about half the earlier monthly numbers.

Right here in Maryland arrangements are being made to accept 2200 women and children, many with relatives in the state, while their cases for asylum are processed. They eventually will either be deported or allowed to stay in America.

But the larger problem is the 11 million or more undocumented aliens who already live and work in America. The House has refused to act on immigration reform legislation that has already been approved by the Senate. Congress also failed to act on the Obama Administration’s $3.7 billion funding bill to process the women and children before recessing for its month-long break. President Obama has said he will use his executive authority to implement changes in the nation’s immigration policies. The world, it appears, has a people problem.