And let's keep Robin Williams out of this. 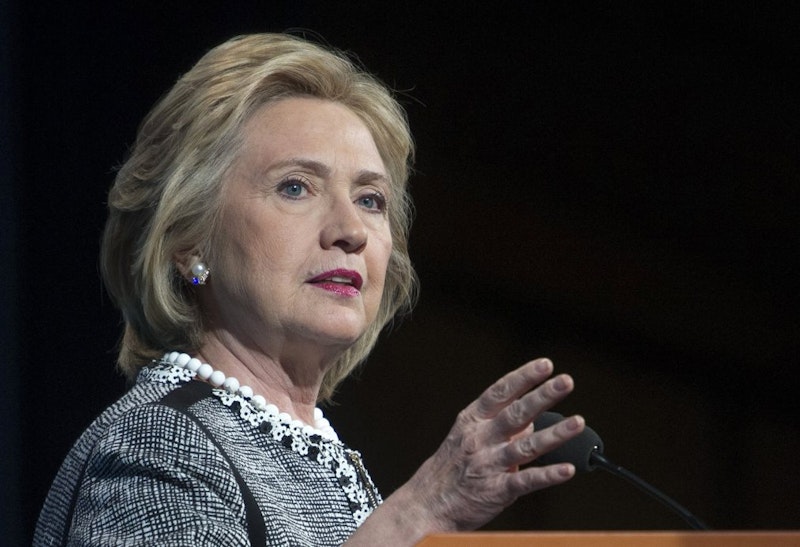 This Wednesday's column by the perkiest author on The New York Times payroll must set a record. From Robin Williams to the Middle East in two moves—wow! Maureen Dowd made a funny tape while interviewing Williams, her pal Michael Kelly listened to the tape and liked it, and years later Kelly became the first journalist to die in the Iraq War. Now for the third move. You know who voted to invade Iraq? Yes... Hillary Clinton.

That fact should never be forgotten, of course. But Dowd forgets that Kelly was all for the war, and not because he gave a damn what Hillary or any Clinton had to say about it. Kelly was a gifted and pugnacious writer with a talent for being certain, meaning (to borrow the classic definition) wrong at the top of his lungs. When he ran The New Republic, he was certain that his pet reporter Stephen Glass had been foully traduced because the subject of a Glass article pointed out that the thing was fictional. A little later he was certain that Al Gore shouldn't be president, and a bit after that he was certain that George W. Bush should invade Iraq.

Now Glass is remembered as the perpetrator of the nuttiest news-reporting fraud since a paper ran stories about bat-winged creatures on the moon. Michael Kelly is remembered by colleagues as a fine friend and standup guy, which apparently he was. The several hundred thousand other fatalities of the Iraq unpleasantness are mainly remembered as a number. Kelly, in his small but vociferous way, helped land them in the same jam that took his life. If Hillary deserves a splash of blood on her hands, Kelly deserves a few drops on his grave.

“It's the Loyalty, Stupid”, reads the headline on Dowd's column. The subject, eventually, is the now notorious remark that our president-in-waiting made about her ex-boss's foreign policy: “Great nations need organizing principles, and ‘Don’t do stupid stuff’ is not an organizing principle.” The bit in single quotes comes from the mouth of President Obama (if you substitute “shit” for “stuff”), so his former secretary of state appears to be saying that Obama's foreign policy views don't measure up. In addition, she uses the word “failure” when talking about Obama's Syria policy. She doesn't say the policy itself was a failure, just that there was a failure to arm the rebels, but she also says the decision to withhold arms left a vacuum that ISIS was able to fill.

Her interviewer, Jeffrey Goldberg, seems quite certain that Hillary meant her remarks as a signal that she is not with the President on these matters. Accordingly, Goldberg rocketed the snippets up from the body of the interview to the headline and deck. Hillary and her defenders say that, no, she wasn't taking a shot, and seeing the bits in context does lend support to her claim. On the Syria decision, Hillary says, “I don't know” when asked if it led to the present dire situation regarding ISIS. She says that “Don't do stupid stuff” isn't Obama's guiding principle, just a line to reassure the public that he won't go overboard. When asked if Obama's foreign policy suffers from “underreach,” she says, “You know, I don’t think you can draw that conclusion.”

Of course, savvy political players know how to plant a dangerous phrase in the middle of bland protective boilerplate. Or so we're told. Last month we were being told that Hillary was a verbal klutz who couldn't talk about the family finances without putting her foot in her mouth. Back in 2008, her punch-drunk comments late in the primary convinced legions of people that she had just said 1) whites were hard-working and blacks weren't, and 2) that she was staying in the race because she thought Obama might get his head blown off. Now Maureen Dowd is telling us that these latest remarks amount to a calculated shafting of an ex-boss who's down in the polls.

Dowd's evidence is that Hillary voted for the Iraq War, a move that had to be calculated because it was “obvious in real time” that Bush's people were making up the reasons for fighting. Yes, it was obvious to a lot of us. It wasn't obvious to many others who should have known better. I won't check if Dowd was in the right group or the wrong group. But I know which side Michael Kelly was on, and I know Dowd drops that fact out of existence while making her case for Hillary-as-conniver.

So whom do you trust? It's a trick question. You don't have to trust anyone, and in this case you can't.