Republicans are left blustering and blathering. 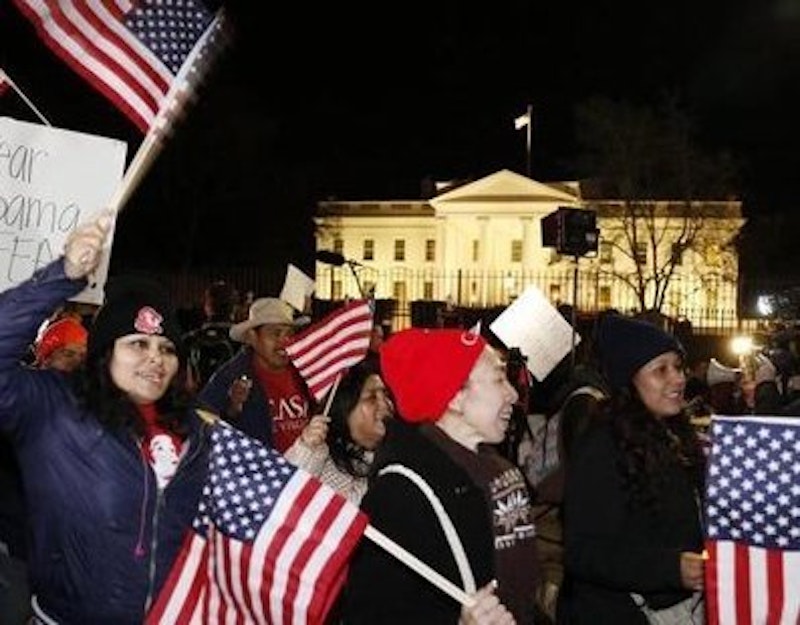 There are an estimated 250,000 illegal immigrants in Maryland eager to say Thank You, Mr. President. No need asking how they got here. You don’t want to know. But the story is that they’re here and something had to be done about it. Many of them are kids, Americans by accident of birth and their parents, paperless nobodies by law.

The Republican-controlled House refused to act on a Senate-passed bipartisan bill even though the measure would likely pass with a solid Democratic vote and a handful of GOP defectors. President Barack Obama, suddenly set free and emboldened, mood-swinging somewhere between defiant and resigned, acted under “executive authority” and you’d think the republic was about to collapse into a second Civil War.

But before it does, about five million of the 11 million undocumented immigrants in America can (1) avoid deportation and remain with their families; (2) get work permits; (3) get protective status; (4) work in high-tech industries if they’re qualified; (5) defer deportation for dreamers, young people who were brought here illegally as children.

The remaining six million, illegally huddled in the shadows of American life, are angry over being excluded and consigned to remain in a legal netherland. This is not amnesty or a free pass. Simply put, as Obama made clear, the chosen millions will not be deported but given a tortuous chance to become legal and, more important, keep families intact. Feliz Navidad!

Immigration reform has had the support of a wide swath and an unlikely cohort of Americans—the Chamber of Commerce whose members capitalize on low-cost labor, labor unions that are seeking to broaden their membership and a cross-section of religious denominations that are anxious to provide social services and to proselytize the new arrivals as well as the established who lack authenticating documents.

As usual, Republicans have been able to generate more heat than light over Obama’s action. They have, variously, threatened to shut down the government; block every judicial appointment that comes before the Senate; wait for the new Republican-controlled Senate to take office in January to advocate for the Senate bill; file a lawsuit against Obama; and, here comes the all-time favorite right-wing cropper, to impeach Obama, as if he cares at this point.

But history has a different story to tell about executive authority as an expression of presidential determination. Executive authority, a thoroughly constitutional privilege, allows a president to bypass Congress under certain conditions and to go it alone. Executive orders are not that uncommon and have been shown to improve the nation’s general condition and, more often than not, to do the right thing at a given time.

Recent polls illustrate that Republicans have done a masterful job of contorting the issue into an abuse of power and not as a humanitarian gesture that Obama declaims. And the public has either bought the argument or doesn’t understand the issue. On the day of the order, one poll showed that 48 percent of respondents were opposed to executive action while 38 percent favored it. Yet another poll showed that 75 percent favored the Senate bill (which does basically the same thing as the executive order, and even more) while respondents by two-one favored a compromise between Democrats and Republicans (which the Senate bill is.)

The executive order easing restrictions for certain immigrants is the newest example of Obama seeming liberated from future elections and exhibiting a sense that he’ll get no cooperation from Republicans so he might as well roll his own stone. Since the Nov. 4 election, Obama, in addition to the independent action on undocumented immigrants, has promised new EPA restrictions on climate change; signed an historic climate change agreement with China; taken a tough position on net neutrality; threatened to veto the Keystone Pipeline; told Congress to put a sock in it and do something about passing an immigration law; released four more Guantanamo Bay detainees, every step of the way antagonizing Republicans and perplexing Democrats with his sudden display of moxie.

Obama’s action on the nation’s huge illegal immigrant population comes after years of promises to ease their plight and more than a year and a half of waiting for the House to act on the Senate bill. House Speaker John Boehner (R-OH) has repeatedly refused to allow a vote on the bill for fear of an uprising by the right flank of his GOP caucus and a threat to his speakership.

Obama has been under pressure to act from Latinos in Congress and immigrant demonstrators on the streets. Maryland generally has been welcoming to undocumented immigrants. Baltimore Mayor Stephanie Rawlings-Blake (D) has said that she encourages immigrants as a way of replenishing the city’s lost population over the next 10 years. And Gov. Martin O’Malley (D), during the recent border crisis, has accepted young immigrants into the state to await disposition by the courts. Earlier, O’Malley had pushed through Maryland’s version of the Dream Act which offers in-state college tuition to qualified students.

The political stakes are high. What troubles Republicans is that Obama’s executive action on illegal immigrants mimics the same collective effect as the Civil Rights Act of 1964 and the Voting Rights Act of 1965. It locks up the Hispanic and Asian votes neatly in the Democratic column in the same way the civil rights acts nailed down the black vote as a bloc. Hispanics make up 4.3 percent of Maryland’s population. Hispanics nationally voted 70 percent for Obama in 2008 and 67 percent 2012. Blacks, who constitute 33 percent of Maryland’s population, voted about 90 percent for Obama and O’Malley in Maryland as well, though they failed to turn out for Lt. Gov. Anthony Brown on Nov. 4.

For their part, Republicans are left to squabble among themselves in a protocol standoff between the establishment wing of the party and the tea party fringe. And following their hapless leaders, the Republicans left town fuming over Obama’s audacious behavior and Boehner’s blustery threat to do something, just what, he’s not sure. So they filed a lawsuit against the health care act.