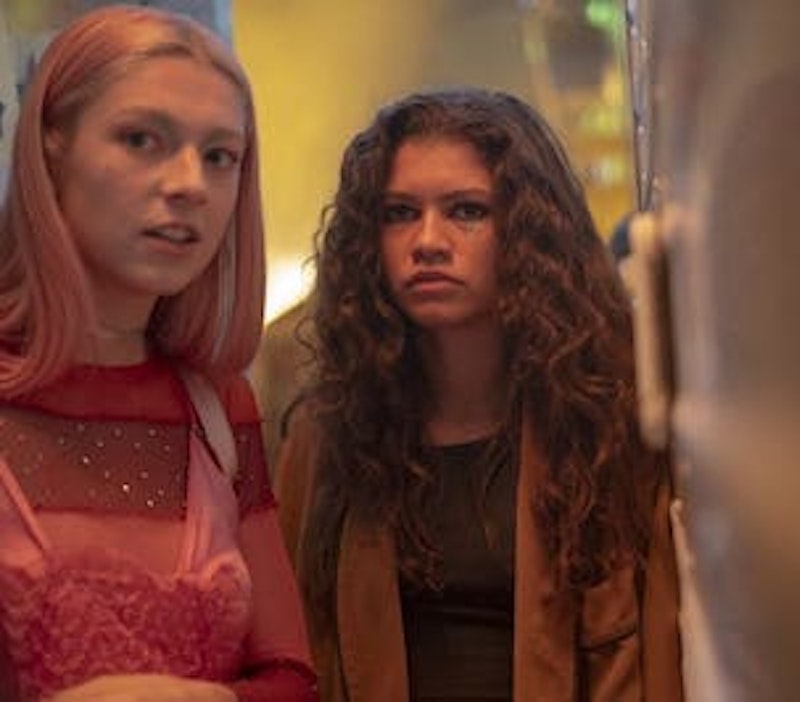 Morally, I don’t think any of these characters are earning especially high marks. The trans woman is probably the least harmful, since she doesn’t cheat on anybody or try to create drama, but she does screw around with a married dominant who’s committing statutory rape with her. In short, these are all people I’d try to avoid in real life, and I’m basically numb to the show’s postmodern theories about which bad girls and boys I ought to like, and how much, and when.

Euphoria is a hit because its confusion mirrors the moral confusion throughout our society about who is “good” and who is not. For instance, I’d argue that the only reason Rue is “good,” from the viewer’s perspective, is that the show is supposedly dealing “honestly” with teen drug abuse. If teens are doing more drugs than we’d like to admit, and are perhaps coping with their habits at a high level, then we should be understanding when they take niacin to flush their systems. In fact, we should root for Rue to pass her mother’s drug tests, because those fake negatives just prove what a clever girl Rue really is.

I think the inanity of this logic pretty much speaks for itself, but it get trickier with Jules, the trans woman. She should be allowed to express her sexuality, right? And sexuality includes kink, does it not? So if she has a kinky night with a dominant man, regardless of his age or background, that’s okay (if a little risky). What’s not OK is for another girl (Maddy) to act like all the boys want her to act, by hooking up in a swimming pool in the middle of a rager. Euphoria drives this point home by having the same boys who gleefully ogle Maddy harass Jules.

A truly sympathetic, accepting view of Jules would treat her as a person facing many of the same problems other women face when it comes to sexuality (in addition to transphobia). In other words, her status as a trans woman wouldn’t re-frame her sexuality by making it adorable and spunky. It would problematize her sexuality because she has to construct it, like every other American woman, within a patriarchy. But that’s too much to ask of a show that doesn’t love its characters, but instead uses them to stay on the cutting edge.

What you get from a show like Euphoria is a scarred, criss-crossing map of the various cultural battles that’ve been fought in recent years. For example, the show rides on a wave of tolerant attitudes towards drug use, attitudes that have gotten a boost from widely successful efforts to legalize marijuana in the United States. Euphoria’s negative view of Maddy is an offshoot of feminists critiquing insufficiently feminist behavior, while its attempt to recuperate Maddy afterwards—and the decision to keep giving her screen time—is an effort not to “slut-shame” her too much. The charming drug dealer, meanwhile, avoids acting like a typical “douche” by stealing his character’s wounded urban style from 8 Mile. Finally, towering above everything else, there is Euphoria’s debt to the gray-on-gray moral bewilderment of previous hit shows like Breaking Bad.

When the capacity of individuals to pay attention is at a premium, the goal of criticism like this might appear to be helping you determine what is “essential,” and what’s not; what’s worth your attention, and what isn’t. But that’s wrong. I’m not interested in stopping people from watching Euphoria. Instead, I want to encourage others to reflect on what they watch, thinking through all of its moral and aesthetic implications. The problem with “cancel culture”—and there is a real, ongoing problem with it—is that it’s focused on editing out objectionable things, be they people or artworks. When you do that, you shut down conversations about what our experiences of otherness actually mean. In trying to rid us of whatever bad stuff is traveling stowaway on the steamship of progress, cancel culture models knee-jerk, absolutist behavior. Instead of conversing, people scramble to get in the last word. Ironically, rather than freeing us up to spend time on worthier things, cancel culture slanders the provocation that draws us to art in the first place, making everything less worthwhile as a result.

The most recent victim of cancel culture, the cartoonist R. Crumb, is a great example of this trend. You’ll know it by its fruits: cartoonist Ben Passmore, at a recent conference, said “fuck that dude.” Another cartoonist angry at Crumb carries one of Crumb’s faux-racist cartoons around on her phone, so that she can “bust out [her] phone and say ‘so you’re down with this?’ In person. To your face.” Notice that there’s no critical reasoning whatsoever here; “fuck that dude” is totalizing, and “So… you’re down with this?” assumes the cartoon is immediately and totally transparent to you the moment she busts it out.

In a Splice Today article about R. Crumb, “R. Crumb Was Never That Great,” Matthew Surridge makes a reasonable distinction between censure and censorship. He’s right to argue that putting R. Crumb down isn’t the same as putting Crumb in jail. But dismissing him with melodramatic, offhand gestures goes hand-in-hand with the kind of impulsive shading that ultimately makes Euphoria incoherent. It’s a free-for-all of prejudices, and even the best, most well-founded prejudice is about as precise and discerning as a hand grenade. When you believe in things you don’t understand, then you suffer. Stevie Wonder said that: he’s right about superstition, and he’s right about cancel culture, too.