Can a “milkshake spring” save our endangered democracy? 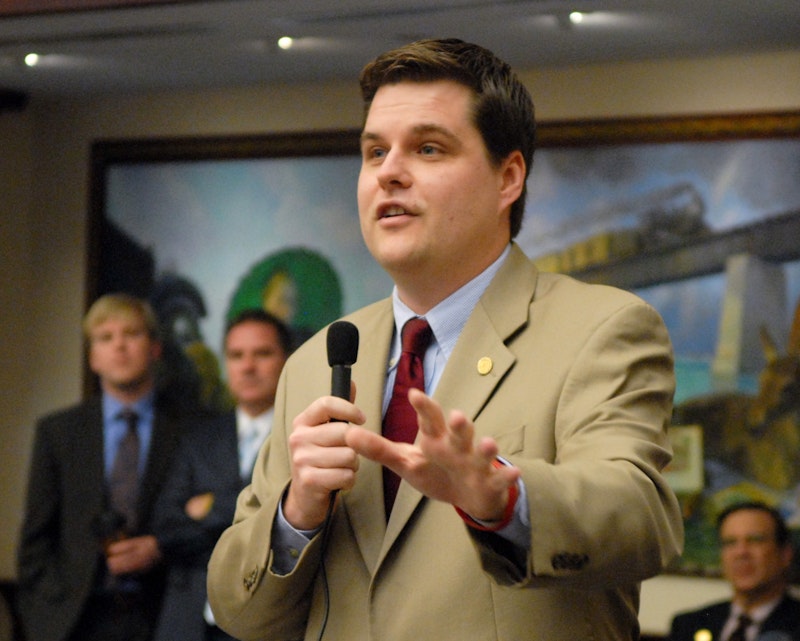 Someone threw a milkshake at Republican congressman Matt Gaetz on Saturday in Pensacola after his town hall, marking the much-anticipated arrival of the “milkshaking” phenomenon from the UK, where it's become a popular way for raging Remainers to express their scorn for “racist and xenophobic” Brexiters. In an added twist typical of Florida's weirdness, the perp was allegedly 35-year-old Amanda Leigh Kondrat’yev, who ran against Gaetz for a congressional seat in 2016. She was charged with battery.

It was inevitable that an American Republican politician was going to get “milkshaked” after all the media coverage of Brexit Party leader Nigel Farage and several other anti-immigration pols getting the same treatment. Perhaps it’ll eventually get to the point here in the US, as it has in the UK, where the media gleefully identifies the milkshake’s flavor. Farage reportedly had his dark suit trashed with a salted caramel milkshake.

Milkshaking’s the more genteel, more accessible version of the “punch a Nazi” craze that took off after a masked man cold cocked alt-right leader Richard Spencer in Washington D.C. on Trump's inauguration day. Gaetz, who invited alt-right activist Chuck Johnson to Trump's State of the Union Address, certainly has Nazi bonafides under the current, broadened left-wing definition of the word.

Now the guessing game’s on to identify the next milkshakee. White House immigration advisor and Trump whisperer, Stephen Miller, would be a top candidate except that he goes straight home from work every night and orders dinner with Postmates, probably under an assumed name. Mitch McConnell's wife, Elaine Chao, who once stepped in to defend her husband from angry protesters, is on milkshake alert now. Democratic politicians can rest easy, as milkshakers are, unsurprisingly, targeting only conservatives.

A man named Danyaal Mahmud ushered in the milkshaking era. The inadvertent founder of the #SplashTheFash movement doused English anti-Islam crusader Tommy Robinson in early May with a shake that he happened to be drinking when Robinson, who's running for a seat in the European Parliament, was trying to make a point to him while campaigning. Robinson took another milkshake the next day, and then Carl Benjamin, a member of the UK Independence Party, got splattered on four separate occasions. Burger King took heat for refusing a police ban on selling milkshakes near Brexit rallies, and then tweeting, “We’re selling milkshakes all weekend. Have fun,“ which many conservatives took as an incitement to violence.

The purpose of the milkshake is to humiliate and intimidate. Reactions to the phenomenon have predictably split down ideological lines. British liberals have dismissed the attacks and mocked any suggestion that they’re a form of violence, or even worth talking about. On the other hand, author and speaker, Sam Harris, has declared—sounding a bit breathless—that milkshake attacks are mock assassinations, whether or not the milkshaker realizes it. A related line of reasoning went something like, “Milkshakes today. Rocks tomorrow. Molotov cocktails next week.”

Harris’ point is that milkshake attacks reveal weaknesses of security and advertise the vulnerability of politicians to the public. That's why Gabby Giffords and Steve Scalise almost lost their lives to gunmen. In the UK, there's the example of Jo Cox, the former MP who in 2016 was shot and stabbed to death in public. Security, to a large extent, is “theater” that's often not equipped to stop a determined person who's not worried about being hurt or killed.

Matt Gaetz, a white male Republican, didn't attract much media attention with his milkshaking, but imagine if Kamala Harris had been the victim.  CNN's Don Lemon would’ve devoted his entire show to it. The same people who will tell you that you're a fuddy-duddy for speaking out against milkshaking would have yelled themselves hoarse if someone in a MAGA hat had flung a Burger King Oreo Shake at the California Senator.

When an animal rights protester rushed the stage in San Francisco last week and grabbed Harris’ mic, the media was all over the story, sometimes with angles involving white man vs. woman of color. We all know what racist misogynists animal rights fanatics are. I hope that Sam Harris noticed that the mic-grabber had no difficulty approaching Harris, and that he didn't need to see her being mock-executed with a milkshake first to realize how easy it would be to do.

Almost anyone would prefer to have their mic taken from them momentarily to getting milkshaked. The disparity in coverage of the Gaetz and Harris incidents illustrates the media's bias. In the UK, milkshakings are celebrated. The Guardian went so far has to refer to the “Milkshake Spring.”

Awaiting next American milkshaking, I'll note that, while they're not worth hyperventilating over, this sort of “protest” (more like vengeance and recognition seeking) will be just the latest blow to the concept of a civil society. The most annoying aspect of the topic, however, is the double standard being applied by “lactose tolerant” progressives.

Democrats fret about bad behavior normalized under Trump. The spread of milkshaking would normalize the intimidation and humiliation of political opponents. It's not going to be stones tomorrow, and then Molotov cocktails, but I really don't look forward to seeing the latest “milkshake hero.” If the Republicans decided to milkshake one Democrat for every Republican that gets milkshaked, I wouldn't have any problem with it.