Are the left brawlers or bawlers? 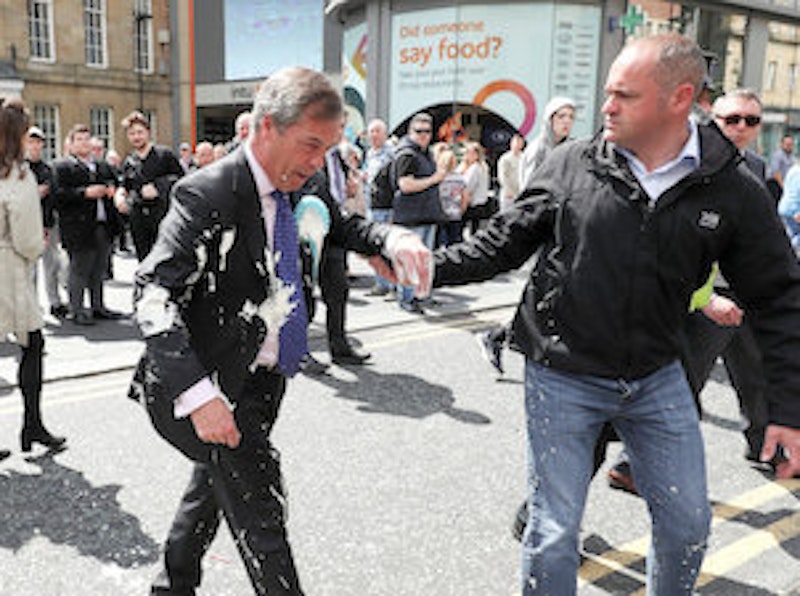 An ostensibly libertarian acquaintance who’s veered leftward unfriended me because I objected to her support for pelting right-wingers with eggs. A short time later, as if to maintain the cosmic balance, a right-winger unfriended me, she claims, because I sometimes muse openly about people’s reasons for unfriending me, which is sort of meta. But let’s get back to those eggs—or better yet, let’s examine the left’s fondness lately for a similar projectile weapon, milkshakes.

Leftists have lately thrown milkshakes at various right-wingers in England and in the past few days have splattered their first member of the U.S. Congress with one—a member who wants medical marijuana legal, by the way, but you have to be pure on all topics to get through life projectile-free by the left’s stringent standards lately.

What strikes me (in the mental sense, not the milkshake sense) is that the political faction that now lobs eggs and milkshakes at people, committing physical assault by my standards even if it’s unlikely to do permanent damage, is also the faction that believes countless tiny purported wrongs or “microaggressions”—ranging from posting accurate crime statistics or culturally-appropriating yoga to using biology-based rather than politics-based pronouns—are examples of fascistic oppression, acts they routinely liken to “violence.”

It‘s always frightening to ask what the left’s end goal is, but is part of the plan to create a world in which throwing objects at people is not considered assault but talking to them is? I mean, there’s a certain consistent barbarism there, fists before tweets, as it were, so maybe that’s exactly the preferred outcome. But there must by now be millions of people witnessing this complete inversion of common sense and secretly contemplating exiting the left, if they can find a chance to make a break for it without being pelted by eggs and milkshakes on the way out.

I wouldn’t advise sticking with the left in hopes they will get saner, either, since even on their most civil days, almost all leftists, by definition, dream of a world in which the masses are constantly harried by taxes and regulations, enforced by cops the left is usually reluctant to mention explicitly. The left’s whole philosophy is violence, so the leap from centralized government planning to DIY object-lobbing is hardly surprising.

The right has its barbarous moments, too, but luckily right and left are not your only options. Remember libertarianism, with its core message that Person A shouldn’t use the body or property of Person B (for instance, as target practice) against Person B’s will. That idea takes care of nearly all political and social conflicts the world faces, but the left would rather scream and throw things at people, the most puerile possible imposition of will upon one’s victims.

Will a left that becomes accustomed to such tactics long remain merely a puerile annoyance, though? We’ve seen similar protestors lob Molotov cocktails at Berkeley. Since so much of what the left does has the structure of a stress test—seeing how much the bland bourgeois normals will put up with—I won’t be shocked if and when the eggs and milkshakes are routinely replaced by stones. We’re fighting fascism, they’ll say, and the occasional death among our enemies was really just an unfortunate, accidental side effect of expressing our support for democracy.

But eventually, at least in the U.S. if not in the more authoritarian UK, the idiots may remember that their enemies, the conservatives, often have guns. And gun-owners, unlike the pro-egging crowd, may well consider egging and milkshaking assault—and then return fire accordingly.

Then the left will whine that gunfire isn’t a proportional and sporting response to egging and beverage-lobbing, as if they were proportional and sporting responses to disapproved speech. The law is appropriately ambiguous about the amount of violence that can be brought to bear in self-defense, but for now, at least in the U.S., it still mostly dictates that the only proper and proportional response to speech is more speech. Good. More words, fewer milkshakes, please.

And while the left dreams of a world in which their foes cower in fear when in public, knowing a wrong word could mean a milkshake, an animal rights activist leaps onstage to grab Kamala Harris’ microphone away from her. How will you ever say no to such behavior in a future where violence routinely overrides speech (so long as the political cause of the moment is deemed just), leftists?

And it isn’t just a small fringe drifting in the direction of thinking that way. Burger King, which is alarmingly politicized even in its U.S. ads, has tweeted implicit support for the milkshake-lobbing on its UK Twitter feed. It’s all part of the ongoing blending of the corporate and left establishments, a public/private hegemony, backed by sporadic violence, far more closely resembling classic, definitional fascism than most of the things on the right that the left criticizes.

And Burger King, like most corporate accounts, has little reason to fear social media platforms banning it for violent rhetoric. The companies can say or do whatever they like, so long as it’s p.c., and trust that “just joking” and “irony, obviously” will suffice as defenses if they’re criticized or challenged, though such fig-leaves wouldn’t be enough to protect their conservative or populist foes from charges of incitement. The forces in control of society may soon decide what constitutes violence on a sliding scale as politicized and subjective as the one they’ve been using for a few years now to decide what constitutes “hate speech.” That will be dangerous indeed.