Popping the Blister of Parochial Paralysis

Absence of authority and inconsistent information encourages people to embrace their inner fascist. 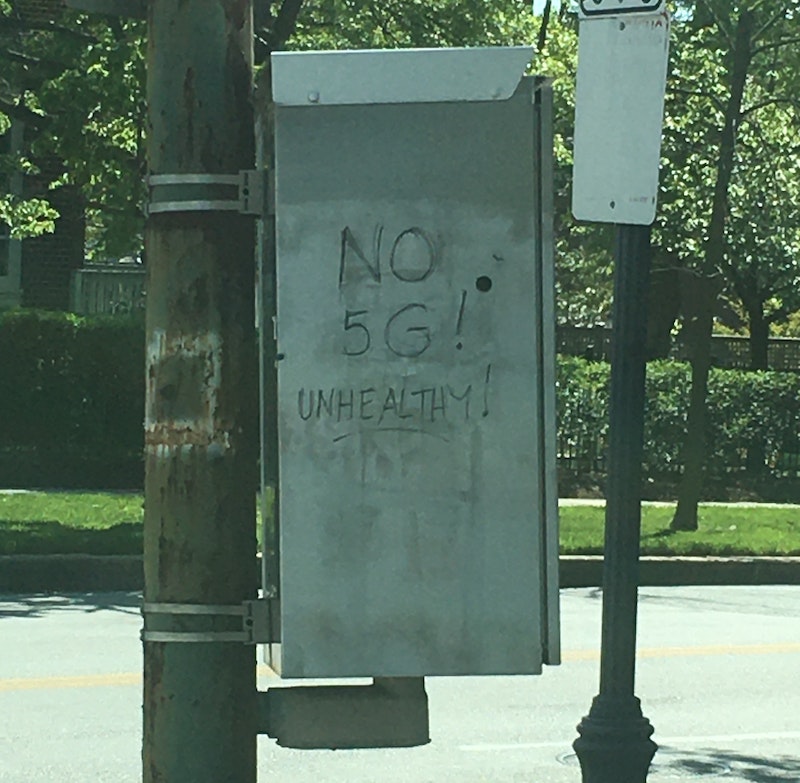 Photo by the author, taken at 39th and Greenway in Baltimore.

“Is anyone really interested or reading pieces that are not about the virus? Sometimes, I'm so conflicted whether to offer any commentary about it or just movies, books, etc.” read a tweet from Splice Today contributor Emina Melonic on Tuesday, who like most of us is in the throes of quarantine fatigue. Beyond anxiety over the prospect of re-opening too soon—or not soon enough—the fog that settled over the country and most of the world in mid-March hasn’t lifted. If anything, it’s been continually tested and (one hopes) fortified as we receive new reports every day from new experts that contradict yesterday’s reports from yesterday’s experts. That’s not a slight on any one organization or individual, rather an indictment of our society: hopelessly atomized and bent on finding our own answers, “our truth,” our own way through this.

Even in all of the nauseating messaging about social distancing and wearing masks “to protect others, not yourself,” there’s an unmistakable tinge of fear and contempt. It’s a command to stay away from me and the people I care about because you are a threat, simply by virtue of existing. The inconsistency of these social requirements renders them ineffectual at best, and, at worst, is another toy for the peons to play with and use to mock each other with while evil billionaires plot their next course of action (outer space or the Earth’s core? Perhaps Elon Musk will take too much acid again and spill the beans on Twitter).

I’ve heard from a number of people about relatives “taking things into their own hands,” and “doing their own research” and coming to disturbing conclusions at odds with the CDC’s recommendations. But I don’t shame, because every one of our institutions has failed in this crisis and merely thrown another wrench into an already dysfunctional social reality. This isn’t an economy that can be stopped for a prolonged period, and the faux “solidarity” expressed by all of the “suggested guidelines” and, even worse, the wannabe cops and eager snitches who finally have a somewhat legitimate avenue to express a kind of fascism.

On NextDoor, which presents itself as “Facebook for your neighborhood,” people are quick to engage in the same kind of “frivolous” gossip and debate that Mark Zuckerberg’s platform encourages. And of course friends have been lost over Facebook, but it’s a more removed experience. You’re “talking” to old friends, family members, and then people you might not have ever met, or met once years ago on a job, party or show. Facebook tsouris rarely maintains its potency in the real world.

But beware the mask cops on NextDoor, who can’t go five minutes without their “daily reminder” to stay inside, wash your hands, wear a mask and socially distance. There are a few things everyone can agree on. Here in Maryland though, we’re not required to wear masks outside, unlike New York City or Los Angeles. Despite this, I’ve seen arguments between bored people stuck in their homes and at a loss for how to regain some semblance of control in their lives. One person posted their “friendly reminder” about wearing masks outside at all times, despite Gov. Hogan and the CDC issuing no such order. Someone pushed back, and after an amusing back and forth, the original poster said, “Well, I’m still going to judge you.” Great!

This is the scrim of contempt I was referring to, that mistrust mixed with disdain for the people around us. Anyone taking a moral position or seeking a perch today will surely fall flat on their face, because to be a scold now is essentially to lecture your fellow prisoners on how to best clean your cell when the warden comes to look. There’s no unifying narrative or even two opposing narratives—we’re living in a world of superimposed realities, with variants within both major political parties. Division’s generally split along partisan lines (I asked a friend of mine on Monday, a diehard Democrat, why there were no reports coming out of Georgia after they reopened three weeks ago. I said this must be good news, and flustered, he said, “It hasn’t been enough time” for the disease to spread. Huh? Isn’t the maximum incubation time 14 days?).

(Then again, consider that the U.S. military has banned COVID-19 survivors who were hospitalized from joining its ranks. If that doesn’t give you pause, or make you question how much the government is hiding, then I don’t know what will).

In the absence of leadership, people will take up the mantle of the town sheriff and enforce their own version of jungle law as this crisis goes on. There will be more militias and snide social media posts, and I’m not sure the pettiness of certain arguments—like whether or not I should care how the rest of the world “sees America,” as opposed to how I feel about what America does to the rest of the world—is going to diminish anytime soon. The virus is the culmination of approximately five years of anticipated dystopia: faced with his first real crisis, Trump has failed. Nothing has changed in the country since his election; people have not reevaluated American society despite the fact that Donald Trump was elected President.

I don’t see things getting better soon, but not necessarily because of the virus. Right now, in mid-May, more states are beginning to reopen even as Anthony Fauci says holding school in the fall would be “a bridge too far.” Remember that Fauci himself said the virus was nothing to worry about earlier this year, but remember too that this isn’t an indictment of him, just a check on an imagined authority figure that never really existed. It’s amazing in the Trump era watching grown adults, many people I’ve known for years, turn into babies. From valorizing Republican ghouls like Robert Mueller and James Comey, to pulling all of your money out of the stock market in November 2016 and putting it all in bonds instead just to stick it to the Orange Man who gets butt-fucked by Vladimir Putin every weekend.

Along the same lines, I’ve no illusions about Bernie Sanders’ failings and the defeat of the “resurgent left” in America. The DSA is over. Rose emojis will wither and it’ll all devolve into incestuous infighting and self-contained conspiracies. I don’t care anymore that the DNC fucked with the primary, it’s over, and it’s what everyone expected them to do. Learn, take stock, and move on. This period is another opportunity for reflection and contemplation, and that doesn’t mean reading a really long book from the 19th century or baking bread every night. Really, what’s next? If the virus disappears with July 4th fireworks, we’ll be relieved, but the animus between everyone in our global village isn’t going away soon, especially if so few are willing to recognize culpability in their misery.

I won’t go into yesterday’s DSA controversy because it is nothing, but Liz Franczak of True Anon tweeted something always worth remembering: “Apparently unpopular opinion but the first step to a healthy political culture is being able to have political disagreements out loud and not worry about suffering political or social consequences.”