Nobody Wants People to Die In the Pandemic

The economy can wreck people's lives too. 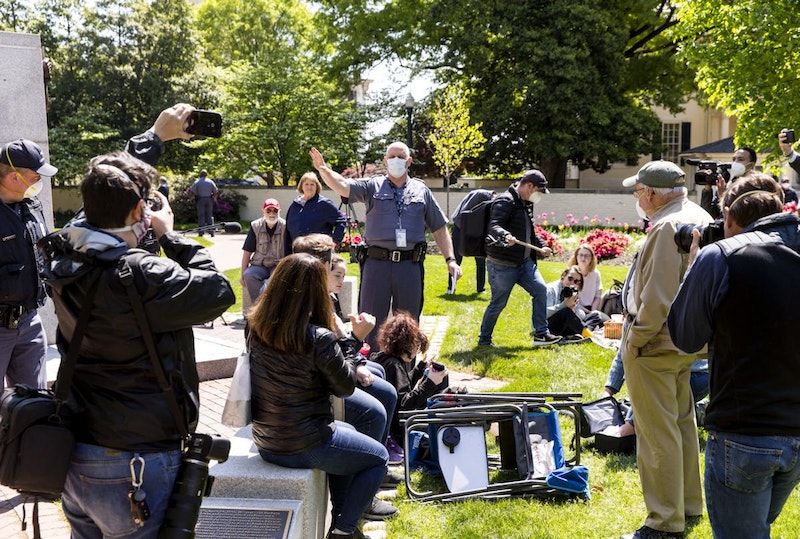 About a week into this lockdown, I wrote to someone on Twitter that our authorities needed to be more creative, while still considering safety, about their restrictions on basic freedoms instead of instituting blanket policies such as denying all access to parks. The person immediately dismissed me as someone who "wants to see tens of thousands of people die." What a rotten thing to say, especially to someone you've been friendly with for several years. I understand that people's emotions are frayed at this time, but they need to check themselves.

Looking back, the divide that's developed was inevitable. Many who support a total lockdown indefinitely think they've staked out the moral high ground that gives them the right to say that those concerned with the economy (the greedy ones) wish death upon others. But this attitude doesn't bode well for the bipartisan consensus that'll be necessary to get through this pandemic as a society. Nobody "wants" anyone to die. Impugning the motives of those you disagree with is a sure way to damage the social fabric.

Do the authorities that set the speed limit at 75 miles per hour want people to die? If they valued every human life as much as the lockdown enthusiasts say, they'd have set the speed limit at 30, thereby eliminating just about every death. That isn't how public policy is set, or we'd all be driving much slower.

Many are playing a game of pretend now. They’re acting as if public policy decisions are made from a moral point of view rather than by making tradeoffs between safety and the personal freedom that America was built upon. One of these fantasists is New York Gov. Andrew Cuomo, who recently talked about how precious every life is while discussing his strict lockdown policies for the entire state. Cuomo was speaking about human life in moral terms, but he was grandstanding because, as a maker of public policy, he knows that life isn’t considered sacred in that arena. Speed limits, for example, are set at a level that allows for an "acceptable" number of deaths in the pursuit of economic efficiency. It's a cold-blooded calculation.

Cuomo was disingenuous and demagogic, something made more aggravating by the fact that it took him about two months to realize that the New York City subways, probably the main spreaders of the virus, needed to be sanitized daily. Still, his stock continues to rise because he talks about the sanctity of every single human life, which makes him appear to be a strong, compassionate leader.

The essential calculation this nation needs to make is what level of risk we're able to tolerate, as Cuomo's zero-risk approach isn't sustainable. On the Democratic side, there's a reluctance to face this reality—even a hostility to it. One of their tactics to avoid even discussing risk assessment is to suggest that there's a Republican push to roll the dice by opening up the economy with no added precautions. This isn’t the case, but the media won't cover this angle.

People say, "Just do what the science says," but we have to be careful when "experts" speak out. Lauren Meyers is an integrative biology professor at the University of Texas at Austin. When Gov. Greg Abbott opened businesses on May 1, with restrictions, the professor addressed the issue to the Austin city council: "To minimize deaths and minimize hospitalizations the answer will be to stay fully locked down or as locked down as you can for the longest period of time." Anyone could tell you that, but how long is "as long as you can"? The professor doesn't get that Abbott's main goal can’t be to minimize deaths for the longest period of time. The economic consequences of that public policy would destroy too many lives. Meyers' science can't tell us how to weigh the potential COVID-19 deaths against all the jobs lost, the suicides, the hunger, the vital surgeries that people aren’t getting because they don't want to go to a hospital, and the drug overdose deaths that will happen. She understands only half the issue.

Militarize this authoritarian zero-risk mentality and you get a Texas SWAT team with the sheriff riding in on an armored vehicle to raid a peaceful protest at Big Daddy Zane’s bar in West Odessa, which was reopened illegally. Using a megaphone, the sheriff ordered everyone to put their hands in the air while yelling at some that he couldn't see their hands. Given the police insistence that citizens comply with their commands, someone could've gotten shot for going to a bar.

A Texas woman who opened her hair salon a week before it was allowed—she said her kids needed food—was sentenced to a week in jail at a time when prisoners are being released from jails because of the coronavirus. We better wake up from this pipedream that our leaders are going to lick this virus while simultaneously salvaging the economy.