Comics’ politics are even crazier than Hollywood’s. 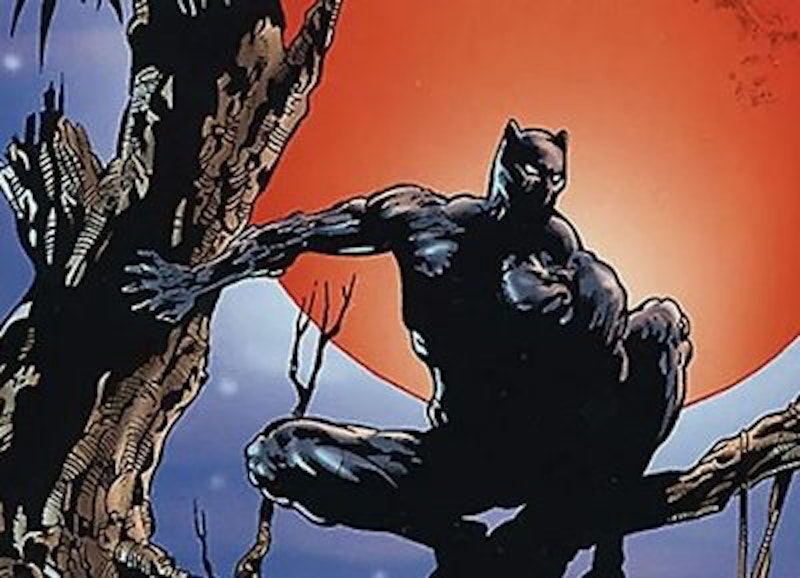 The Black Panther movie has barely opened and already journalists, craving a story peg, are predicting the ethno-isolationist title character will be like Trump. No, wait—Black Lives Matter! No, wait—North Korea!

If the journalists want controversy, though, maybe they should turn their eyes away from the big screen and look at all the crazy stuff that goes on in the comics industry proper (much of which I glean from the comics gossip site BleedingCool).

The printed-on-paper comics industry rarely creates incidents as dramatic as Rose McGowan’s former agent committing suicide after failing to support her ex-client’s rape narrative. And comics editor Eddie Berganza being accused of harassment is nowhere near as juicy as the revelation that former Smallville actress Allison Mack leads a real-life sex cult in Hollywood whose members carve her initials into their flesh. And weird racial politics in comics rarely gets as heated as that high school kid’s science project on ethnic groups and average IQs being censored. But comics can be a politically divisive biz (and it provides fodder for other science projects, such as a real psychology study suggesting kids perform tasks more effectively while pretending to be Batman).

First of all, the comics industry has to cope with endless misreporting by the mainstream media. As you may’ve noticed, every time you know a topic well, you realize reporters are getting that topic all wrong. (So, assume that they’re just as wrong about all the topics in which you have no expertise. Scary, right?) Black Panther is not the first black movie superhero, for instance, nor, for instance, will the next seven “first gay superhero” stories you see actually be about the first gay superhero.

But even if we just focus on internal industry politics and not the wider world’s distorted view of things, comics are fertile ground for conflict. For instance, the X-Men comics had to boot Muslim artist Ardian Syaf not long ago after it was discovered he was subtly drawing anti-Semitic messages into the backgrounds of scenes.

Talented artist Ethan Van Sciver, by contrast, has long scuffled with online leftists in the industry and among fans, and it sounds as though a possible impending BuzzFeed article on the topic may have inspired revised guidelines from DC Comics for contributors about how they should use social media and talk to the press. I suspect the real reason Van Sciver is suddenly inspiring extra panic—and some violence—on the left, though, is that he has committed the great sin of illustrating quasi-libertarian psychologist Jordan Peterson’s new book, 12 Rules for Life. (For a guy who sounds like Kermit the Frog, Peterson has caused a lot of fear and anger in leftist circles lately.)

Despite the fact that the comics industry overwhelmingly leans left—producing things like overweight superheroine Faith fawning over Hillary Clinton as they share their insights about life’s victories and defeats—I should acknowledge that the medium’s basic moral/aesthetic assumptions are conservative-looking, and those assumptions may warrant as much skepticism as recent trendy leftism. Maybe if society had consumed fewer tales of superheroes smashing criminals, society would be less likely to spawn cops who whine when told they can now be sued personally for criminal wrongdoing on the job.

And maybe we should all find it unsettling that you can now buy t-shirts based on the Jack Kirby art designs for a film that only existed as a front for a CIA operation—Lord of Light, the fake film project depicted in Argo. (But don’t denounce the head of New Jersey’s Jack Kirby Museum, Rand Hoppe, as a political ideologue, by the way. Despite having the most libertarian-sounding name in history, it’s just the one he was born with, his wife assured me when they appeared at the One Art Space gallery a few months ago.)

Despite the lawman/vigilante vibe many traditional tropes in the art form have, you can see a leftward tilt in most of the stories comics creators now consciously pick to tell, though. (This in turn influences the stories told in film and TV, such as an animated Teen Titans episode in which Beast Boy turns into an evil leprechaun bent on restoring the gold standard— though I concede that in another episode, an evil mummy atop a mystical pyramid is the only beneficiary of the “pyramid scheme” of fiat currency, a more far-right, hard-money model of our economic problems.)

You usually get more grief for violating leftist taboos than right-wing ones in this subculture. Actor/comics writer Kevin Grevioux found himself denounced by leftist comics fans for defending Kevin Sorbo, after the latter was uninvited from East Coast ComicCon merely for being pals with Sean Hannity. Grevioux is a black man who turned a parable about rebellion against vampiric aristocrats into a big-budget horror movie (part of the Underworld series he co-created), but that won’t save you from the SJW mob these days—which is perhaps why the SJWs get likened to Nazis.

Then again, the left would be hard-pressed to sound as Nazi-like as the former Fantastic Four artist who was at least briefly a Holocaust-denier. And it was likely a mostly right-leaning, patriotic crowd who basically hounded writer Aubrey Sitterson out of his gig on the G.I. Joe comic last year when he (as a weary New Yorker) dared tweet dismissively about 9/11 commemorations. And who can blame the left for getting paranoid once in a while when actual white supremacists have taken to wearing t-shirts inspired by Marvel’s fictional Hydra fascist organization?

Rose City Comicon in Portland even responded by banning Hydra and Red Skull outfits at their events, even on normal, non-fascist fans. And WorldCon seems to be banning conservatives in general preemptively, some charge.

Meanwhile, lefty comics creators scheme online to harass right-leaning ones. As with many workplace behavior codes these days, it’s tough to judge who’ll be deemed to have “started it” if a (non-violent) conflict occurs between factions subject to a set of rules like those of the Baltimore Comic-Con. Who got offensive first? A Teenage Mutant Ninja Turtles writer seeming to tweet death threats may be over the line, though, as arguably is another creator’s admonition to “punch every Nazi.”

Maybe none of this should be surprising in a world where even CGI animals throwing blackberries at Mr. McGregor in the new Peter Rabbit movie is cause for controversy (since McGregor’s fruit allergy is being mocked, and food allergies are purportedly no laughing matter), a world where Steve Martin is now deemed an offensive comedian for appropriating Egyptian culture with his novelty song “King Tut.” Martin’s defense, obviously, should be “Well, excuuuuuse me!” (Yet suddenly I feel like that guy in RoboCop saying, “I’d buy that for a dollar!”)

Hollywood’s been through so many decades of this sort of thing they’re getting adept at feigning mellowness about it all, most of the time, even with some obvious cracks showing lately.

Bryan Singer, despite rumors of rape and underage sex, and his recent firing by Fox (perhaps timed to ditch a potential liability just before the big Disney-Fox merger?), sure managed to be a model of mellowness and taking it all in stride in this recent street-ambush interview by TMZ. He doesn’t sound like a man wracked by secrets and guilt, at least. I think even I’d be nervous and calling for my lawyers if TMZ confronted me.

But then, even if he’s completely innocent, I feel a bit sorry for his former employers, too. Poor Fox, as it cycled through a succession of X-Men directors, went from gay accused-harasser Singer to straight accused-harasser Brett Ratner and then to rumored adulterer and January Jones-impregnator Matthew Vaughn (she has never officially said who the child’s father is, but the conception seems to have occurred during the production of Vaughn’s X-Men: First Class, to the dismay of both Fox and Vaughn’s wife Claudia Schiffer, and Jones cheekily named the child Xander). I love that whole franchise, but it seems to attract weirdoes as helmers.

Perhaps all that will be forgotten if the big Disney-Fox merger is completed and both the X-Men and Avengers universe get rebooted… or merged… or declared adjacent parts of the multiverse… or revealed to have been the same single universe all along, but now, perhaps, with an injection of new directors and actors. It’s hard to know what they’re going to do until the merger details (including shareholder approval and a counter-bid from Comcast, not to mention possible quibbles from regulators) are ironed out. Sadly, even Marvel Studios head Kevin Feige sounds as though he can’t yet make plans past 2019. We’ll see.

And if they remain confused over at rival DC Comics about what sort of movies to make and whether to emphasize Greek gods or cyborgs in them, happy supermen or scowling crusaders, I suggest they just put anarchist DC writer Grant Morrison in charge of everything, both in print and on-screen. His Syfy TV show Happy! about a talking, crime-solving pegasus has done well, and I’m sure many of the ideas he used for his character Seaguy in the comics could be applied to Aquaman on film. Or at least I’d enjoy seeing them try.

More anarchists in positions of power may be just what politically troubled and morally confused American industries need to straighten them out. Let the screwed-up superhero biz be a test case.