Why the surprise that Mrs. Obama and Mrs. Romney can deliver a speech? 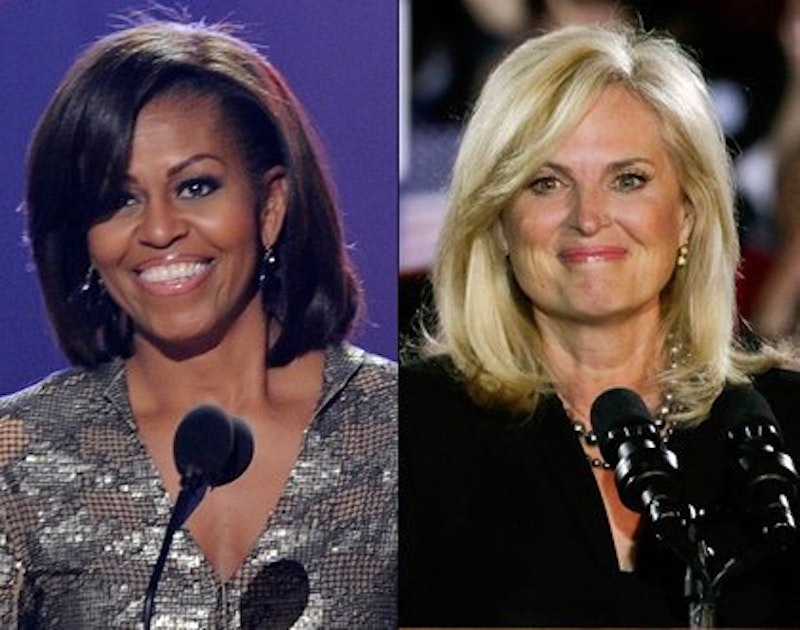 I didn't watch the Republican Convention, and after about five minutes listening to NPR coverage of the DNC, I gave up on that as well. I have a visceral reaction to listening to people read marketing copy at me. It makes me want to take a bath and then pray that the pits of Hell open and swallow our sorry excuse for a civilization once and for all.

But there's an attraction/repulsion thing, I suppose, so I did check out commentary on the thing-I-could-not-bear-to-see. Apparently, most people were impressed with Michelle Obama's speech on Tuesday night. Josh Marshall even expressed something like awe.

I often wonder: how is it that political spouses often end up being such good speechmakers? This was an amazingly good delivery. But Ann Romney’s was pretty good too. Giving a lengthy speech in front of millions of people is really, really hard. It takes a number of skills wrapped into one—timing, a good speaking style, coolness under pressure. It’s no secret that most politicians can do it reasonably well. That’s why they’re politicians. Baseball players are good athletes. Well, that’s how they became baseball players. But again, it doesn’t necessarily follow that the spouse is good at it too.

Again, that's Josh Marshall, professional political journalist.  He makes his living covering politics. And yet, he’s surprised that Ann Romney and Michelle Obama can stand up in front of an audience and deliver a speech.

Of course, it's de rigueur for presidential wives to present themselves as if they're average, everyday folks: devoted wives and loving mothers who just happened to end up married to the one guy who is vital for America's future. Thus Michelle calls herself  "Mom-in-chief" while Ann talks about the profound love she has for the man she met at a dance. Christ, even reading the transcript is making me a little ill.

Anyway, the point is, they say they're just normal loving women doing normal supportive loving women things the way normal women do because they're normal. But when they say all that, they are… well, lying, seems a bit harsh. Misleading, shall we say? Gently embellishing? Whatever you want to call it, you shouldn't take it at face value. Especially if you're a political journalist.

It's true, as Marshall says, that giving an effective speech in front of thousands of people and on national television is hard. I sure couldn't do it. But he's wrong when he suggests that it's some sort of accident that this is a skill that both Ann Romney and Michelle Obama have acquired.

Because Ann Romney and Michelle Obama are not just random spouses who happened to marry some guy who got into politics. They are the spouses of men who have devoted their lives to seeking high political office. Barack Obama almost certainly was thinking about the presidency at least from the time when he ran against Bobby Rush for Congress in 2000, and probably long before that. Mitt Romney's been running for president actively since he stepped down as Massachusetts governor in 2007, and probably has had his eye on the Oval Office his entire adult life. Since their wives knew them before they married, my guess is that Michelle and Ann had some sense that Barack and Mitt were ambitious men. These women didn't stumble into politics; they chose it, presumably because they were ambitious too.

Moreover, when you're the spouse of a professional politician, you're part of the election effort. You meet and greet; you kiss babies, you raise funds… you give speeches. Neither Ann Romney nor Michelle Obama walked out onto their respective convention stages as some sort of novice civilians. They walked out there as high-level campaign functionaries with years and years of experience in doing exactly what they did—marketing their husbands.

Marshall isn't a fool; he must know that this is the case. So why the surprise? How did he manage to convince himself that Michelle Obama and Ann Romney are anything other than extremely accomplished, frighteningly ambitious, national-level political operatives? I don't know the answer for sure. But my guess is that it's for the same reason that Michelle and Ann work to make people think that they're not political operatives. In a democracy, people want to feel like they're voting for just-folks; they want to identify with the President and his family and his charming, loving, ordinary spouse. So everybody pretends together, and nobody thinks too hard about how driven, slick, and cynical you have to be to stand up on national television and deliver a stirring speech that bamboozles even hardened journalists into thinking that you're not a politician.