The Muldoons Will Decide This Presidential Election 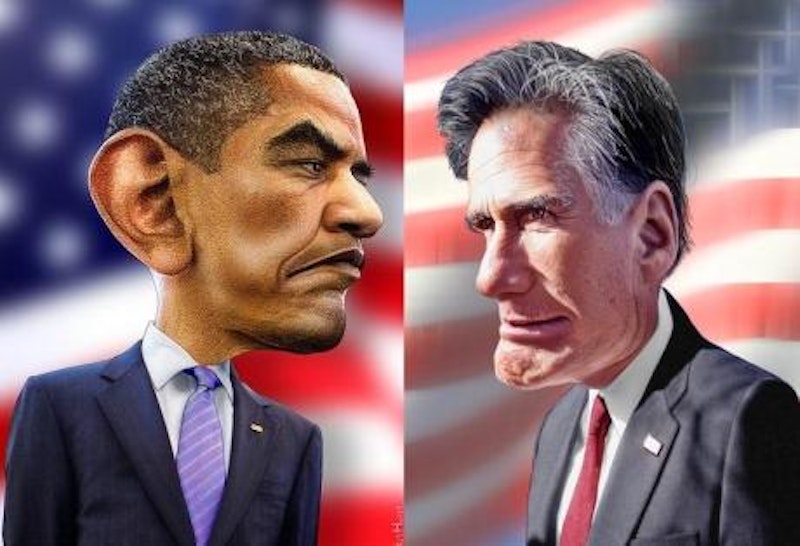 The 2012 presidential election, perhaps for one of the few times since the advent of television, will be won or lost the old fashioned way—on the ground and in the precincts and not on the airwaves. As if evidence were needed, more than $100 million has been spent so far on TV advertising and the polls haven’t budged a point. President Obama and Mitt Romney remain stalled in a dead heat.

Broadcasting, most of it negative, has failed to do its insidious work. The candidates are now turning their attention to narrowcasting—the social media—which really is the old politics plugged into the new, an extension of the ground game and the age-old political concept of the extended family. The Family of Facebook friends is the social media idea of the folks next door and the beer-buddy at the local bar. Facebook is the new precinct captain.

A recent Washington Post-ABC News poll, published on the eve of the Republican convention in Tampa, pegged Obama at 46 percent and Romney at 47, a statistical tie. Ditto the Gallup daily tracking poll with the identical numbers, only with Obama topside and Romney a point below. The needle hasn’t moved since the last deadlocked poll in July despite the mind-numbing barrage of TV ads, some of them accurate and others downright fraudulent. Momentum appears to be eluding both candidates, though a bump in the polls usually occurs as an aftershock following conventions.

The ground game, as foot-soldier campaigns are called, is more traditionally Democrat than Republican, more urban than suburban and rural and more reliable than TV to produce actual bodies on Election Day, the final roundup. Politics, at its most primal, is a face-to-face business. Big cities and coastal states are where Democrats are clustered among friends, neighbors and relatives, thus the extended family of voters. In the days of machine politics, the “muldoon”—a curious Baltimore coinage found nowhere in the dictionary—was the political leader with the largest circle of extended family and friends, aunts, uncles, children, in-laws, cousins, co-workers and neighbors. The muldoon organized and delivered the vote.

The ground game, too, has always been the handicraft of unions, sound trucks, bullhorns, phone banks and door-to-door canvassing, for the most part on behalf of Democrats. Many of the old AFL-CIO members long ago defected and became what are known as “Reagan Democrats.” Their ranks are greatly diminished as manufacturing jobs have disappeared and workers have aged. But today’s modern unions are unquestionably in the ranks of the Democratic party. The Service Employees International Union (SEIU), for example, has pledged to deploy one million workers on Obama’s behalf backed up by three million phone calls.

Voting is triage. Campaigns know what voters they have and what voters they don’t have. They hunt for those that can be persuaded, the small percentage of undecided and swing voters in the middle. Facebook is the electronic-age equivalent of the ground game and this is the first election in which it will be a dominant political force because of its explosive growth. It is person-to-person contact. There are 160 million Facebook users in America, up from 40 million users four years ago.

Facebook is a proxy for the old political organizations. It is capable of organizing groups of voters and harnessing the electorate into a workforce. The Obama campaign has established a vast data gathering operation. It has combed the voting records of 190 million voters and has assembled a network of 25 million Facebook fans and their contact information. The Obama campaign also has a list of 1.3 million donors, each of whom has contributed $250 or less. This is micro-targeting, or narrowcasting, in its most contemporary application.

There is a dispute over which candidate and which campaign is employing the social media to its best advantage. Pew Research recently released a study saying that Obama is leading Romney in social media activity. However, a number of conservative publications and Republican bloggers pounced on the story by claiming, without supporting documentation, that Romney has demonstrated more efficient use of the new medium than Obama.

Nonetheless, other reports indicate that while the Obama campaign is hustling on the ground the Romney operation is focusing more on conventional TV commercials to do its dirty work. This approach, in the modern campaign context, might be akin to generals fighting the last war. TV commercials seem so 1990s, given the evidence of their ineffectiveness so far. Romney will have more money than Obama and probably more outside groups eager to tear down the president in order to install their own man in the White House.

Republicans and their allies have instigated the use of negative, or attack, ads in modern campaigns. The two most notable are the Willie Horton commercial that was used to destroy Michael Dukakis in 1988 and the swift boat ad that was used to discredit Sen. John Kerry in 2004. But Democrats are not totally innocent of the art form perfected by Republicans. This year, an organization promoting Obama launched an ad implying that Romney’s business practices in the private sector helped to kill a woman with cancer.

But the most lethal political commercial of all times is the so-called “Daisy” ad, the handiwork of the late Tony Schwartz, in LBJ’s 1964 campaign against Barry Goldwater. It ran only once and never mentioned Goldwater’s name. It was effective and memorable because it resonated with people’s fears of nuclear devastation.

Ground-game campaigns can be costly undertakings. In urban centers, walk-around money is still the coin of the realm, honored more as a tradition as much as a cost-effective return. In 1960, for example, John F. Kennedy’s Maryland campaign set up shop in the long-gone Emerson Hotel in downtown Baltimore, traditionally the state Democratic party headquarters. The machine bosses and ward leaders of the era paraded through one by one as Kennedy’s pay-master, a Boston mortician/politician named Joseph Kernan, asked how much each one needed to deliver the vote. They were paid, in cash, on the spot.

As if to underline the comparative approaches by the two campaigns, a Washington Post report shows that the Obama campaign and the Democratic National Committee have transferred $50 million to swing states around the country to establish hundreds of field offices and to hire campaign workers. The Republican campaign has dispatched only $8 million to state parties.

Republican apologists argue that Obama is reverting to his Democratic base because he is worried. Romney is doing exactly the same thing to try and solidify the GOP’s reluctant and suspicious base. Securing the base and getting out the vote on election day is fundamental politics. Everyone agrees that this will be a close election that is decided by a tiny sliver of swing (independent) voters, about two percent of the electorate, in eight battleground states. Despite all of the electronic advances, the old ground-game voter delivery system may be the new wireless politics.