Mitt, Did You Really Think Clinton Was on Your Side? 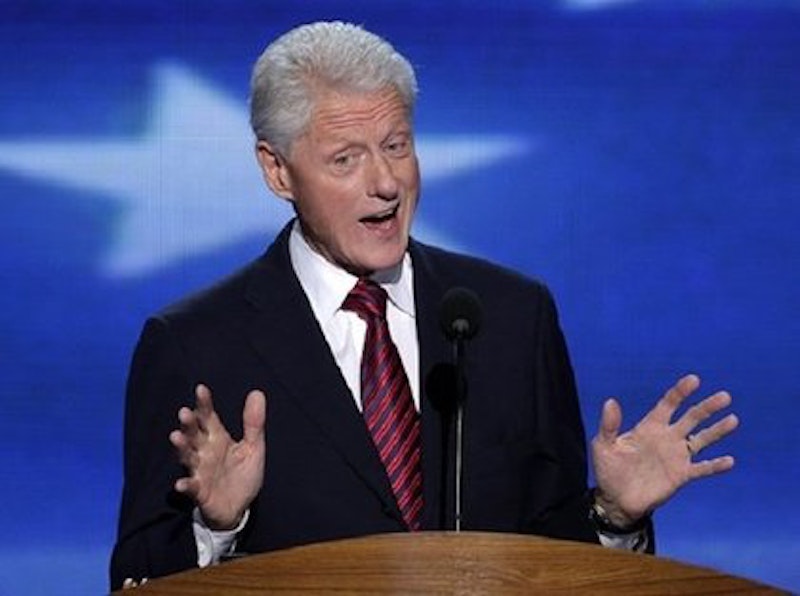 Bill Clinton should be Barack Obama's agent. Last night he did what our side's partisans have been longing for. He provided a point-by-point rundown as to why we are right and they are wrong, and he did it for almost every dispute of the past four years. Finally, somebody on television talked his way through the Medicare cuts (not to benefits, to the money for insurance companies and hospitals). “Look, here’s what really happened,” Clinton said. “You be the judge. Here’s what really happened.” And out came the guts of the Medicare dispute. The words included “recommendations of a commission of professionals” and “unwarranted subsidies.” But somehow Clinton got people to listen to the word string and take it in. His dancing finger made everything work.

The worst of it, from the Republican point of view, was that Mitt Romney's campaign had appointed Clinton arbiter-in-chief regarding welfare and the economy. They made this mistake by being sly and dumb at the same time. Romney's people spent weeks saying Clinton produced jobs and Obama didn't, that Clinton made welfare enrollees work and Obama would just send them their checks. Very shrewd, using the White House's last Democrat against the present one—until you reflect that both men, being Democrats, might be on the same side in a presidential election.

In Charlotte the recovery creator and welfare reformer walked on stage and said Obama was good and the Republicans bad. He even gave Obama a gold-plated pass on the economy: “President Obama started with a much weaker economy than I did. No president—not me or any of my predecessors—could have repaired all the damage in just four years.” True as to the weaker economy, but Obama did say he'd get the job done in his first term. Now it turns out that's not a failed promise, just a case of a mistaken time frame. This particular turnaround needed more time, and we know that on the say-so of Bill Clinton, the only person on earth whose resume reads “Saved America's economy, restored prosperity.” Does the item belong there? Well, the Republicans were saying it did.

Possibly Romney's people have read too many Drudge items about the Clinton-Obama tensions. The right is a gang of angle seekers and inside dopesters. (Global warming is really a power grab by scientists, and so on.) They love to search out cracks in the liberal facade and then spin off stories about the cracks, above all stories about the vanity and selfishness of those rare men who grab the White House from them every now and then. They can't believe that one such creature, Clinton, would pass up a chance to shaft the man who usurped him, Obama. They should have paid more attention. Over the years a line-up of giant egos have marched to convention podiums and worked their lungs for men who had swatted them down. Mario Cuomo and Jesse Jackson did it for Clinton in 1992, and in 2008 Clinton did it for Obama. Now he has done it again, and this is a surprise only to the people trying to get Mitt Romney elected.

The right can take comfort from a moment just after Clinton's speech. First, it's true, Clinton bowed to Obama, and then the two of them hugged. Then, arm in arm, both in blue suits and red ties, they strolled from the podium and greeted important men together off in one of the wings. That done, the two of them strolled toward the exit. But they had disengaged during the handshakes, and now it turned out that they were no longer actually walking together. Clinton's back somehow put distance between itself and Obama; the gap shimmered into being. Not getting it, Obama reached over to clap Bill on the back; instead his long fingers touched him between the shoulder blades, just barely, and then they were left to hang at the end of Obama's long arm. Bill sailed on, just a few feet from Obama but so far away. Perhaps Clinton hasn't forgiven Obama for knocking him ass over teakettle in the South Carolina primary of 2008. But that's how it is with parties: People stick together even if they don't like each other. And, after all, Mrs. Clinton is Obama's secretary of state. You'd think the Romney people might have factored that in.

Facts. Clinton's defense of Obama on Medicare works better if you don't know that the Congressional Budget Office said the cuts might have to be accomplished through reduced access to care, not just streamlining of the payment system. That's no less true of the Paul Ryan budget with its equally large cuts in Medicare. But “no worse than Paul Ryan” is not a good place to be and certainly not what Clinton was claiming for Obama. As to Clinton's other claims—numbers of people moved from welfare to work, numbers of jobs created under Republicans and Democrats—I don't know. But he was careful about how he used the 4.5 million new jobs figure. Unlike other speakers at the convention, he made clear that the figure covers only the second part of Obama's term and leaves out the terrible job losses suffered early on: “In 2010, as the president's recovery program kicked in, the job losses stopped and things began to turn around… And, in the last 29 months, our economy has produced about 4 and a half million private-sector jobs.” Of course, “began to turn around” is doing a lot of work there, and it's not like no more jobs were lost, just that the net had turned positive.

Favorite moments.  “That's their position—see me about that after the election.” “It takes some brass to attack a guy for doing what you did.” “So far, every single person who’s bet against America has lost money.” (Those last two lines are improvs, apparently.)  “I was just a country boy from Arkansas, and I came from a place where people still thought two and two was four.” Of course, the chief reason for loving that line is hearing a folksy politician use the phrase “country boy.” I didn't know they actually did that.

The “jobs score” business. As noted, I can't judge Clinton's accuracy here. But talk about getting down to brass tacks. Thousands and thousands of politicians in this country, and how many of them have thought of shouting “jobs score” and then lining up the stats? Even better, the man says “zee-row” (thumb and finger up high to show a circle) like the king of the water cooler debates. That's what he is, and last night he proved it for Barack Obama and the greater good of the Democratic Party.