How the Invisible Non-Vote Could Affect Obama 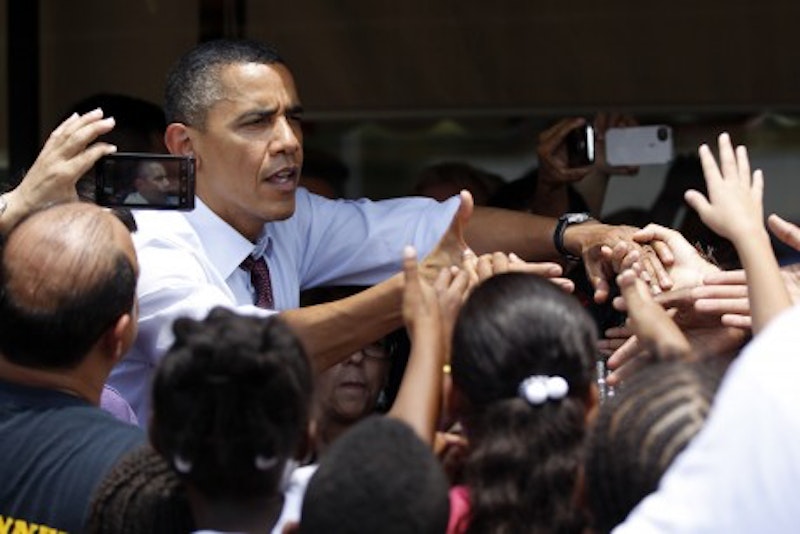 At week’s end, after the Democrats’ revival meeting in Charlotte has concluded, and an energized President Obama (whose speech tomorrow night will inevitably—inevitably—elicit thousands upon thousands of words that “Barack is Back”) whips up supporters in battleground states, one question will not be asked. How will Obama replace the votes of those Americans, whether among the cognoscenti or just plain “folks,” who are simply unable to muster the enthusiasm to pull the lever for “hope and change” once again.

I’ve no idea how large this contingent is—maybe one or two or three percent, Ralph Nader numbers—but in an election that, at least currently, looks to be very close, Obama can’t afford many defections. It’s possible he’ll pick up the votes of those young people who weren’t eligible in 2008, but will that compensate for the unalterably disappointed and betrayed proponents from four years ago? It’s a shame that Harper’s magazine inexplicably carries on with its pay wall on the Internet, for its contents, as a friend recently remarked on Twitter, might as well not exist. The September issue contained a blistering essay by liberal icon Thomas Frank, who, when not re-visiting the politics of his home state Kansas or railing for the 141st time about the Tea Party, is quite capable of bipartisan scorn.

And Frank’s invisible “Easy Chair” column is one that Obama’s Chicago headquarters must be relieved hasn’t received a whit of attention at this crucial juncture of the campaign. I’ve no idea whether Frank, as a dutiful citizen, will hold his nose and vote for the lesser of two evils, but like-minded Democrats, who agree with his comment that Obama was “lifted to the presidency four years ago on a great wave of progressive fantasy,” may find something else to do on Nov. 6.

Labeling the President as a de facto Republican, Frank is unrelenting in his criticism. Here’re just a few of his choice observations:

• “A truly dedicated Obama watcher… might remind us that President Obama has pursued governmental secrecy to a degree even the Bush Administration never dared, and that he has arrogated to himself the right to kill American citizens overseas who have not been convicted of any crime.”

• “[E]ven while Obama still had a Democratic Congress to work with, bipartisanship was the altar on which quality legislation was repeatedly sacrificed.”

• “What Barack Obama has saved is a bankrupt elite that by all rights should have met its end back in 2009. He came to the White House amid circumstances similar to those of 1933, but proceeded to rule like Herbert Hoover… Organized labor is crumbling, and he has done almost nothing to help it recover.”

• “As I watched this upside-down unrest emerge, I used to wonder how long it would take Obama to switch on his inner FDR and start grappling with the nation’s problems the way they obviously needed to be grappled with. The years passed, and I finally realized that this was never going to happen. Then a different possibility started to dawn on me: Maybe a second New Deal is precisely what Obama was here to prevent. Maybe that was the hope all along.”

As noted above, Frank’s indictment of the President—and, to be fair, he bludgeons Republicans of every stripe and economic station—has, and will not, receive much attention. Frank is a very smart writer—never mind that I find little to agree with him on—and while his articulate summary of Obama’s failed presidency isn’t likely entirely shared by left-wing Americans, it surely captures the mindset of a small percentage of voters who’ve left the President’s fold.

This isn’t inconsequential. Saddled with a GOP predecessor who went AWOL after Katrina, John McCain ran a miserable campaign in 2008, and was then leveled by the fall of Lehman and his wacky choice of Sarah Palin as running mate. Joe Biden or even Patrick Kennedy could’ve defeated McCain. It’s a new political world this time around, and Obama can’t afford to lose many of his votes from four years ago. So, it depends on how significant the Frank Factor is: shave a percent or two off his ’08 total and Obama might not join his new best friend Bill Clinton as a twice-elected president.