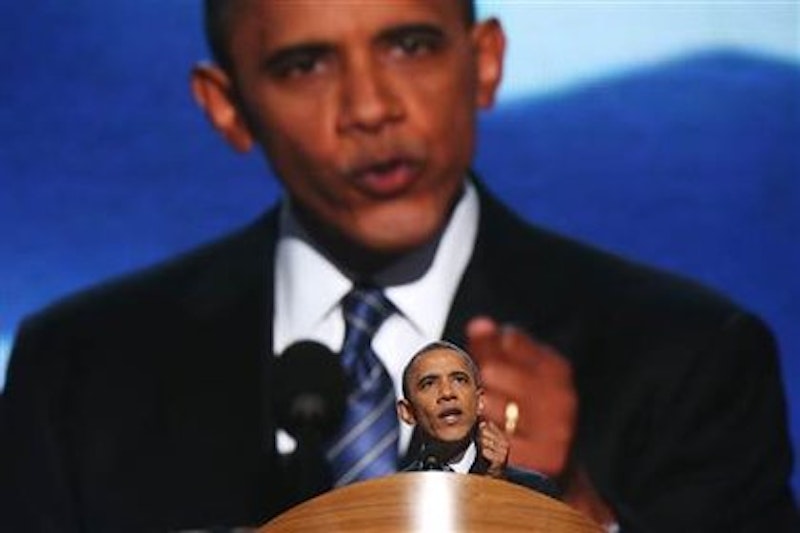 The final minutes of Barack Obama's Democratic Convention speech took off like a jet. Up until then it was routine, and its notices will turn out to be more drab than not. Even the final few moments of blastoff won't get mentioned much; maybe we take it for granted that Obama can do these things. Even so, the big moment made my arm shiver, much like Chris Matthews' famous tingling leg. Obama's voice took on a quick, ragged up-and-down, his vowels began to billow with feeling. The crowd shouted with him, its voices rising with his and then falling away suddenly so they can hear him, then rising again as he points his karate chop of a hand at the horizon. Nobody else can generate a moment like that. Well, Martin Luther King and Jesse Jackson, but no other politician in a suit talking about initiatives.

Otherwise Obama's speech at Charlotte was not interesting. Decent, not bad, but how much fun is any occasion that involves job retraining at community colleges? (“Help give 2 million workers the chance to learn skills at their community college that will lead directly to a job. Help us work with colleges and universities to cut in half,” etc.) The limp notices, naturally, have focused on what Obama should have said, the big pictures he should have painted.

I'd go with one that showed why and how the opposition was crazy. The 40-year build-up of privately funded propaganda machines that have poisoned the right's mind into permanent frenzy. The effect of this frenzy on policymaking, with specific attention to fiscal policy and the foreign policy of 10 years ago. A discussion of how this frenzy has affected Washington lawmakers, with a recap of events, detailed where necessary, from Obama's term. Really, what I have in mind is a broader-gauged continuation of the talk Bill Clinton gave Wednesday night. Unlike Clinton, the president wouldn't just bat down charges and policy proposals; he would bat down the history and rationale of today's opposition party. He'd make the Republicans into the Crazy Party the way Nixon and Reagan made the Democrats into the Gutless Hippie Party. There'd be a common-sense historical thread people could latch on to, like the way they used to talk about the 1960s making everyone soft. But no doubt this sort of thing is trickier to pull off than I think.

Instead the President focused on the here-and-now, meaning the long-lived economic mess that the other side dumped on the nation. Obama has managed to keep the mess from turning into a cataclysm; he has not managed to make it go away, in large part because of the other party's dedicated and highly disciplined willingness to be lunatics when it comes to negotiation over fiscal policy. By now all the country can do is put one foot in front of the other and keep its eye on the lit window that lies across the snowy plain. Or, as Obama put it:

“America, I never said this journey would be easy, and I won’t promise that now. Yes, our path is harder—but it leads to a better place. Yes our road is longer— but we travel it together. We don’t turn back. We leave no one behind. We pull each other up. We draw strength from our victories, and we learn from our mistakes, but we keep our eyes fixed on that distant horizon, knowing that providence is with us, and that we are surely blessed to be citizens of the greatest nation on earth.”

As it happens, this was the peroration of his speech, the moment when his voice soared and my arm tingled. But the message comes down to this: “Slog.” In fact, Obama's 4326-word speech came down to that one message. You could take the word and put it on the “Hope” poster, and that would sum up Obama's first term and maybe his second. But the message has something going for it. We do need to slog, and we'll get the job done. I'd like more on how we got into this mess and who's to blame, but that’s a game Democrats find too dangerous to play.

The human wand behind the podium. When Obama is rolling along in a decent but not spectacular way, his voice acquires an up-and down bounce that's just noticeable enough to be soothing. His gaze falls into a rhythm too, and like the bounce it comforts you without demanding that you realize it's there. His chin swipes from left to right, right to left; the arcs are usually miniature and don't take in the whole horizon at one go, but they hook together. Look at him and there's always a curve for your eyes to fall on, and soon enough the curves will add up to a whole sweep, the 180 degrees.

That's soothing too, or comfortable might be a better word, since all the while Obama's well-formed tenor voice will be telling you things meant to inspire or provoke, and his hands will leap toward his chest and away as he gestures. His face is alive: chin jutting at one moment, lip curling at another. (These bits of mugging often come when his gaze has hit the peak of an arc and is looking off to screen left or right.) It also has to be mentioned that Obama jokes and confides and can raise his voice to call out moral imperatives and necessary national goals. In general he acts like a living, present, normal man who somehow has made eye contact with a whole arena and is unreeling sentences that he thinks will do it some good. But what soaks into you, minute by minute, is the bounce and the chin swivel, the two of them replicating themselves over and over. It feels good.

Ran down a hallway? Sen. John Kerry also spoke at the convention and surprised people by being forceful and animated. He did quite a number on Mitt Romney's back-and-forth views regarding various foreign crises. The passage included this, with “he” being Romney:

He ran down a hallway? If true, the Democrats ought to be spraying the fact across national media. As the saying goes, imagine what Karl Rove could have done with this.