Trump’s Mind Has a Weak Bladder

Why the world’s biggest liar can’t help telling the truth. 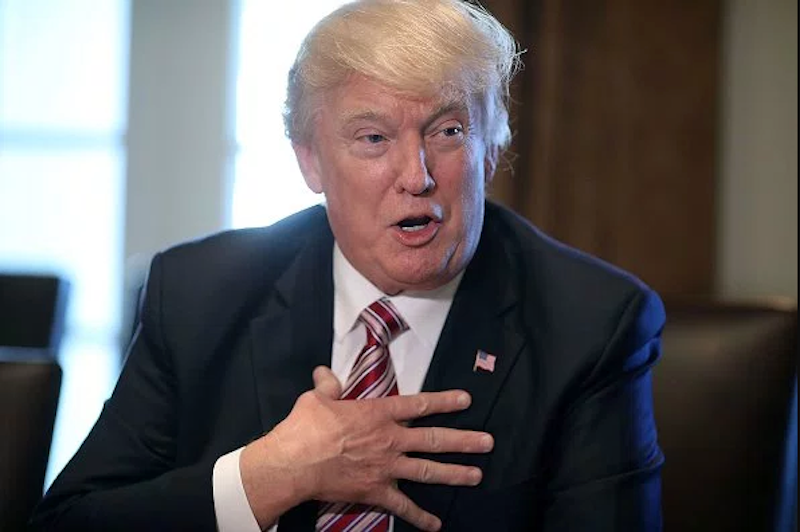 Donald Trump presents many problems. Here’s one: he tells a stream of lies, but he can also blurt out the truth. “I say what’s on my mind,” he declares in Crippled America, his latest book. I can think of one case where he did so directly counter to his best interests. This was during his second debate with Hillary Clinton, when the candidates were asked to say something good about each other. Hil, a cagey type, praised her foe’s allegedly fine offspring, and she did so in very few words. For his part, Trump launched an aria. “I will say this about Hillary,” he announced. “She doesn’t quit. She doesn’t give up. I respect that. I tell it like it is. She is a fighter. I disagree with much of what she is fighting for. I do disagree with her judgment in many cases. But she does fight hard and she doesn’t quit and she doesn’t give up, and I consider that to be a very good trait.”

All true, very much so. On the other hand, that same week Trump ran a TV ad that said the following: “Hillary Clinton doesn’t have the fortitude, strength, or stamina to lead in our world.” This was over stills of a tottering Hil being helped about by aides. So Hillary comes up short for fortitude, strength, and stamina, but she’s a hell of a fighter who doesn’t quit.

Of course, Trump’s motive for the ad copy is plain. The talk of “fortitude, strength, or stamina” was an elevated, would-be classy version of the case made by the photos. Instead of saying “Her health is terrible, folks,” one climbs a few rungs and talks about character traits. But then Trump, with his debate remarks, had to bring in the real-life Hil, the one who was rocking him as hard as he rocked her. If he’d had a choice, he wouldn’t have done it. But Hil makes a striking impression, and Trump can’t hold in something once it strikes him. He begins to feel a gassy, bloated distension. He fills, and he must give out or suffer, and he refuses to suffer. So the words come forth, politic or not. But speaking the words will do nothing to change his behavior. If he contradicts himself, he won’t even feel embarrassed.

As they grow up, most people learn to live with two uncomfortable truths: facts matter, and it’s best to keep your interior monologue to yourself. This combination produces what’s known as the white lie, the typical adult person’s method for coping with an existence where more than one person gets to be real. Trump never learned those lessons. Facts don’t matter and neither do people. His needs matter, and they don’t include sitting on himself. He isn’t truthful, because he lies too much. But like a belch or a fart, Donald Trump is authentic.

Good God, man. Henry Miller, please stand up. From Tropic of Cancer: “When into the womb of time everything is again withdrawn chaos will be restored and chaos is the score upon which reality is written. You, Tania, are my chaos.”