Once you decide to play the political game roughly, you don't get any breaks. 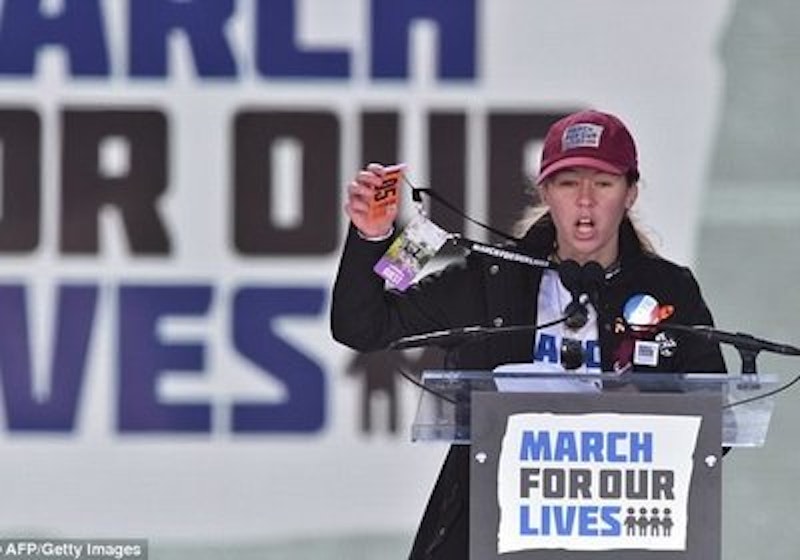 The shooting at the Marjory Stoneman Douglas High School on Feb.14 saddened the nation and then gave birth a new anti-gun movement like the nation’s never seen before. Its leaders are a handful of the survivors of the attack, and they can often be seen on TV, whether it's a CNN Town Hall or panel discussion, or the March For Our Lives rally last weekend in Washington D.C. The media puts them forward as authoritative voices, regardless of their actual knowledge of policy issues, because they're perceived to have earned moral authority through their suffering.

Anyone pushing back against the teens risks severe criticism, which is something progressives specialize in. It's reminiscent of the treatment people got if they suggested anything negative about Caitlyn Jenner, back when she was wrongly assumed to be a liberal just because she's a transgender activist.

A relatively tame example of this sort of tone policing is former U.S. Attorney Preet Bharara’s tweet suggesting you’re “losing” if you attack these kids. While there's some truth that traumatized teens deserve some extra consideration, the harsh reality is that they've decided to play hardball in the political arena so they don't get to play by their own rules. By hardball, I mean things like carrying around price tags at the D.C rally for $1.05 because their analysis of NRA campaign contributions to Florida Sen. Marco Rubio indicated to them that he'd priced the lives of each student in his state at a buck and change.

Harsh, and far from fair to claim that Rubio made that obscene calculation, or suggest that the NRA bribed him. That organization, like the ones that donate to Democrats too, find candidates that vote their way and then give them money instead of handing them cash to buy their vote.

It's clear that these kids can get away with anything at this point, mostly because they're backed by the media and progressives who’re pleased that they can say things they're not allowed to. Even in a debate on a topic as emotion-driven as guns, it’d hard for an adult to suggest that a guy with four children of his own looks at young lives as being worth about the same as a can of Coke. But if a high school student does it, Vox and CNN will report on it as if it were an acceptable political tactic. Would it be preferable if the senator “valued” children's lives at a higher dollar amount? If so, then using the logic employed in arriving at the $1.05 figure means Rubio should have taken more money from the NRA, which none of the college-educated people in the media have mentioned. If he'd taken much less money, then they could say he thinks kids’ lives are worth only a nickel.

The Left has brought its identity politics to this fight, meaning that people are defined by various demographic boxes they check rather than as individuals. If you criticize the Marjory Stoneman Douglas students then you're criticizing their “experience” in the parlance of intersectionality. They know this issue because they've lived it. Their passion and intensity can’t be countered by those who haven't also lived it, even if they're armed with policy knowledge and facts. For some reason, progressives haven't said a word about the students' white privilege in this case.

The most visible of the high school #NeverAgain activists is the talented young demagogue David Hogg. While there were four law enforcement agents at his school on Feb.14 who stood outside while his classmates were gunned down, and other authorities including the FBI failed to take action against the shooter, Hogg ignores this completely, choosing instead to use incendiary language that will certainly bring out the Republican vote in the midterm elections in November. At the rally on Saturday, he spoke of the 96 Americans who die per day from gunshots. Two-thirds of those people are suicides, and most of the deaths are from handguns, but his movement addresses only weapons in the AR-15 category. It has no ideas that will lower that 96 figure by much.

Here's an example of the rhetoric Hogg thinks will advance his cause: “It makes me think what sick fuckers there want to sell more guns, murder more children and honestly just get reelected. What type of fucking person does that? They can have blood splattered all over their faces and they don’t take action because all they see are dollar signs.” He sounds like someone who’s emotionally exhausted, not a leader. The teen is quickly approaching the end of his grace period where this sort of language is given a pass.

Hogg has every right to speak out, as do his classmates, although the media’s much less interested in the ones who disagree with him. The #NeverAgain movement often appears more performative than substantive. Emotion can be an effective driver of political change, but unharnessed it can undermine a cause. The media's put Hogg on a pedestal, but he's not savvy enough to realize the backlash his demagoguery will inevitably produce. Progressives don't get this either, but this is making them feel good so they're excited.

There are few better ways to get Republicans to the polls than to make them think there's a revolution underfoot aimed at grabbing their guns. It was looking like many of them would stay home in November, but who knows now? David Hogg's on a roll, but progressives should lighten up on lecturing people who take shots at him.