Obama is trying to solidify the Democratic Party by turning towards black voters, despite facing criticism from prominent black leaders. 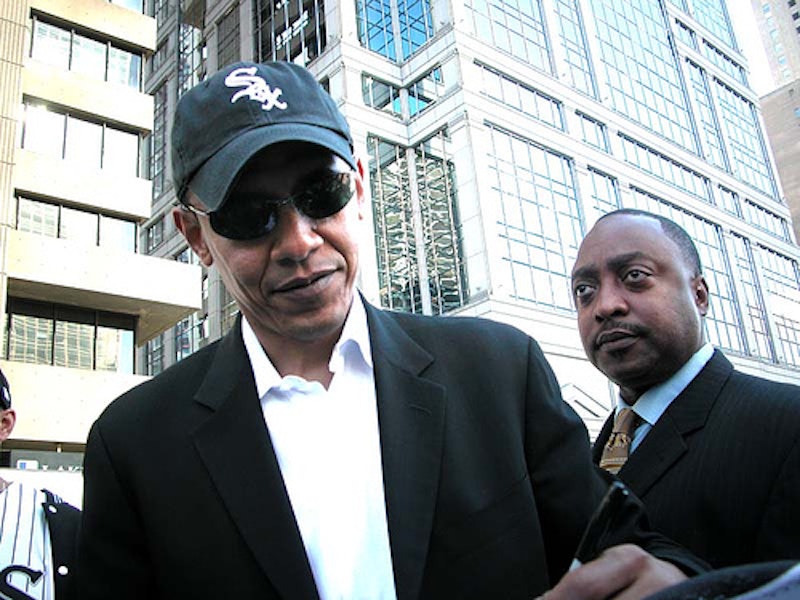 There are two Barack Obamas:  Harvard Obama and Chicago Obama. The President drifts from one to the other as the occasion and his message allow. Harvard Obama is the man of soaring oratory and powerful imagery who, some say, delivered one of his finest speeches in Denver following the shooting of Rep. Gabrielle Gifford (D). Chicago Obama is not to be confused with an urban urchin, but is more the lawyerly community organizer who picked up the patois, the cadences and the swagger of the city’s neighborhoods and streets, incorporating them sparingly into his casual talks. That was Chicago Obama at a college in Richmond responding “love you back” when a member of the audience shouted her affection. And at the Congressional Black Caucus dinner when the president importuned his listeners to “take off your bedroom slippers and put on your marching shoes.” And it was no accident that Obama chose the predominantly black Benjamin Banneker High School, in the District of Columbia for his annual address to the students of America.

Politics is about connectivity. And this is not the usual city-city shuck-and-jive stuff. Hillary Clinton did it, and nobody does it better than Bill Clinton, as parodied in the movie Primary Colors. Obama is striving mightily to re-connect with the Democratic Party’s natural base, a large measure of which is the black community, a major voting bloc since the 1960s civil rights era of Democratic presidents John F. Kennedy and Lyndon Johnson. Many blacks are disenchanted with Obama’s presidency because they feel left out by one of their own. The unemployment rate among blacks is almost double that of the national average and many believe they have not benefited directly since the first black president took office 18 months ago. A testy Obama recently defended himself during an interview on BET by arguing that the criticism of him is the result of a generational divide in the black community, with attacks originating with younger blacks while older black leaders who lived through the civil rights movement are shown more patience.

Adding to his problems, Cornel West, the black studies professor and rap producer, late of Harvard and now of Princeton, is furious at Obama for not returning his phone calls. In television interviews, West has criticized Obama for turning his back on the black community but mainly for not wanting to listen to West’s solutions to black conditions in America.

Stating the case more bluntly and giving it context, Rep. Emanuel Cleaver (D-MO), chairman of the Congressional Black Caucus, said, “If [former President Bill] Clinton had been in the White House and failed to act on this [unemployment] problem, we probably would be marching on the White House.”   Rep. Maxine Waters, of California has been equally harsh in criticizing Obama for failing to deal with the black joblessness. Much of the criticism originated during and after the Black Caucus conducted its own tour of American cities where unemployment among blacks is dangerously high.

The White House, it appears, is perplexed and doesn’t know which way to swing—to the left or to the middle with its rich lode of independent voters. Catering to blacks will antagonize whites and the reverse of that argument is true as well. The big tent that the Democratic Party has been since it was assembled by FDR appears momentarily fractured, mainly by economic uncertainty and despair. But the biggest danger to Obama’s re-election is apathy—and disappointment—among blacks. They have no one else to vote for, it’s true, but how many will vote is the unknown ingredient in next year’s election. And the more the throngs of young voters who flocked to Obama in 2008 hear black community leaders belittle the president the less inclined they may be to participate in the electoral process.

However, with Obama nose-diving in the polls and the economy in the dumpster, there are two consoling interests to consider: (1) Obama’s job approval ratings may be in the red zone but his likeability quotient remains in the 70s, and likeability ultimately wins elections. (2) The incumbent president is disadvantaged by not having a defined opponent. The Republicans nomination of a candidate changes the entire equation.

It’s an iron law of politics: Make certain the base is secure and build from there. Obama’s first job is to once again ignite his natural constituency. There is, perhaps, little he can do about joblessness in the black community without the help of a Congress that his hell-bent on destroying Obama’s presidency, and even that may be a little late to trickle down by election day a year from November. But Obama can begin to repair some of the ill feelings among certain elements of the black leadership even if it takes a phone call or two (though who knows what happened between Obama and West at Harvard?). It's difficult to imagine the thought processes of the first black president governing a nation controlled by a white power structure and dominated by a white ethic - even though the white numerical majority is diminishing. In virtually every poll, 20 percent of the voters say they dislike Obama because he is black. That idea alone must infuse much of Obama’s decision-making and political strategy.

Note that the black critics of Obama—Cleaver, West and Waters, among others—never mentioned that if, say, George W. Bush were president they’d be marching on the White House. Blacks, other minorities and the disenfranchised rarely ever pick on Republicans because they know the GOP will not respond to their threats or demands and they’ll gain nothing from the exercise. So it is no surprise to hear Herman Cain, the black conservative Republican candidate for president who won the Florida straw poll, play the old divide and conquer game. He accused the black community of being “brainwashed” for habitually supporting liberal candidates. “African-Americas have been brainwashed into not being open-minded, not even considering a conservative point of view,” Cain said on CNN. Never mind that it was two Democratic presidents who fought for the great civil rights advances of the 1960s.

So if you hear Obama's speech patterns occasionally slip into an urban rhythm, with the tonal inflections and syncopated riffs of hip-hop, understand where he’s coming from and realize the connection he’s trying to make with the audience. And witness the lope and the hugs and the back-slaps. They’re warm and engaging. Catch the shirt-sleeved president with the upturned cuffs. Obama’s getting back to his base. They understand.