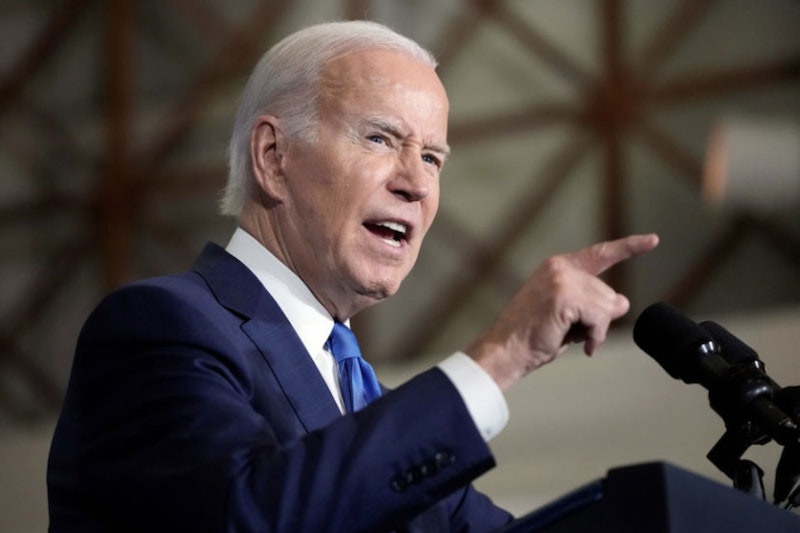 The mission creep in the rhetoric of Democrats, both those running the government and those running the media, is desperate and alarming. They’re plainly veering toward saying all who don’t vote for the Democrats this week are enemies of the state. If only. Biden’s speech at DC’s Union Station last Wednesday implied that unless democracy reaches the right verdict this week—keeping his team in charge of Congress—democracy is wrong, and it’s destroyed to boot.

All of this is said while the congressional committee investigating last year’s January 6 riot at the Capitol (“J6”) subpoenas Trump, his advisor Bannon is sentenced to four months in jail for the sort of failure to appear before Congress that was routine until just the past few years (it was a chronic complaint from the Republicans when they were trying to get Obama administration figures to appear), and document review advances in Mar-a-Lago. We get the secondary message: Vote Democrat or you belong in jail.

Meanwhile, in Hollywood, screenwriter Adam McKay of Vice and Ant-Man fame, ostensibly qualified to tackle the serious issues (most recently jumping on the cannibalism-comedy bandwagon that holds a curious appeal for the elite), makes plans to dramatize J6 (as if it hadn’t been dramatized enough already). He likely won’t include footage of Ashli Babbitt talking to police minutes before her death at police hands and trying to convince them to call for backup to stop the few violent protestors.

Government, responding to J6, now extends its net far beyond those who directly scuffled with cops that day. By a year after the incident, the Boston branch of the FBI was officially tweeting the name of their latest J6 arrestee from that region and exulting that this brought the number of area arrests to 13. I guess it’s been something of a contest for the feds, the winner still to be determined.

A couple of months after that, at least a dozen people were charged with seditious conspiracy over J6, including an Oath Keepers leader. I suppose it’s wonderful from a libertarian perspective that the nation’s farthest-left and farthest-right factions are now mainly bickering not over whether government can perfect society but whether responsibility for a riot lies with a former president or the FBI itself. (Or should this make libertarians sad because government entities are once more trying to take credit for private individuals’ organizational efforts?)

For its part, the Department of Justice has responded by forming a Domestic Terrorism Unit, as if the DOJ hadn’t already been heavily involved in investigating, and occasionally fomenting, that sort of crime. At the very least, Executive Assistant Director of the National Security division of the FBI Jill Sanborn insisted only, “I can’t answer that” when asked directly by Sen. Ted Cruz whether any Bureau agents incited or committed crimes of violence during J6.

But it’s not just the FBI that gets to dabble in crime and then hypocritically orchestrate a national crackdown: Biden himself was arrested at age 21 for walking into the Senate and, since he met no opposition, sitting in the presiding officer’s chair. Now, he probably wants new military divisions to scour the country in search of people who might contemplate doing such a thing.

Ten months ago, the one-year anniversary of J6 saw countless Democrats waiting on the House floor to shake Dick Cheney’s hand, with no Republicans joining in (while his daughter began what would prove her final year in the House by appearing on the J6 inquiry panel). You’d think that might suggest to the Democrats they’ve done something stranger than simply morph into the party of law and order.

Not to worry, authoritarians. As always, the media has your backs, and if your behavior increasingly stokes fear, the media will simply cite that fear in headlines—as if that psychological state, not the government behavior causing it, is the unhealthy, pathological thing. MSNBC warns: “German police used virus tracing app to scout crime witnesses. Some fear that’s fuel for conspiracists...” Oh no, we wouldn't want conspiracy theorists and anti-government forces feeling vindicated! If only there were some way to avoid that.

Similarly, here in the U.S., instead of asking why people increasingly hate government, state governments are citing J6 interchangeably with the 2020 race riots as excuses for a wave of state-level anti-protest laws, the constant goal in 21st-century policy being the creation of neither a right-wing nor left-wing society but, regardless, a Cartesian grid of control. New York City isn’t the only place where the cordons have gotten visibly more numerous—and maze-like—with each passing year. That, we’re to believe, isn’t a rising threat to democracy or freedom.

Why should I expect people to treat freedom as the best response to purported threats to freedom when their intuitions are apparently so warped they think of Alec Baldwin as a credible critic of the Second Amendment, feel safer if the Department of Homeland Security coordinates censorship efforts by the major social media platforms, and revere psychotic former government officials such as Robert Reich, who thinks Elon Musk poses a dictatorial threat to democracy by letting people blab more freely on Twitter?

At least half the population craves a firm, controlling hand, and if J6 didn’t offer them a scary excuse to vote new controls into place, they’d just wait on tenterhooks for Biden or some other leader to tell them what the new menace is. Perhaps pot. There must be some threat out there that needs to be crushed, man. There must be.