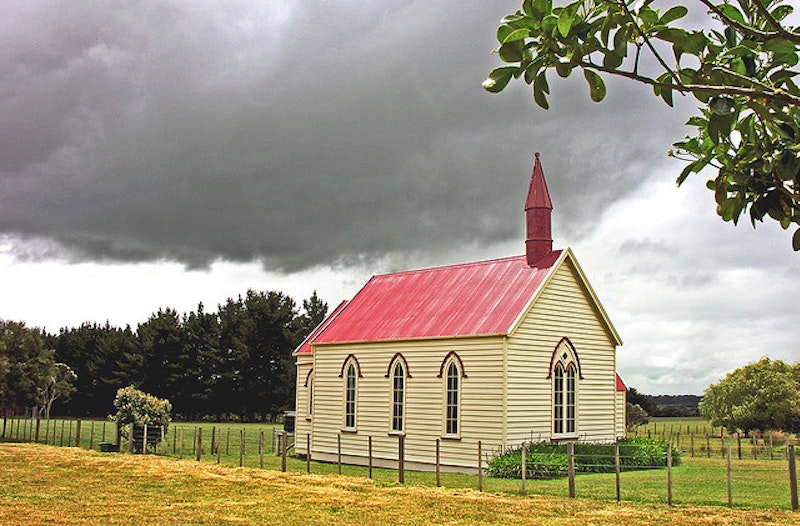 Why is it that there’s never any positive news coming out of my home state of Arizona? From Senators John McCain and Jon Kyl’s backward defense of Don’t Ask Don’t Tell to the draconian immigration law put in place this year, it seems like every time AZ pops up in the news, it makes me cringe.

So when I read this story about the Catholic Church stripping Phoenix’s St. Joseph's Hospital and Medical Center of its affiliation, I thought, “Here we go again.”

A twentysomething mother of four with a history of abnormally high blood pressure found out she was pregnant again and checked herself in to the hospital. Her symptoms progressively worsened and the doctors determined that death was a near certainty if the pregnancy was allowed to continue. To save the mother’s life, they terminated the pregnancy. The fetus was at 11 weeks.

Apparently, the Catholic Church would rather have two dead bodies, a widowed husband and four grieving children than allow an abortion for any reason, because they determined that St. Joseph’s had violated ethical and religious directives of the national Conference of Catholic Bishops and withdrew their affiliation as punishment.

"In the decision to abort, the equal dignity of mother and her baby were not both upheld," said Bishop Thomas Olmsted. "The mother had a disease that needed to be treated. But instead of treating the disease, St. Joseph's medical staff and ethics committee decided that the healthy, 11-week-old baby should be directly killed."

Really? Is that your expert opinion on the matter? And I suppose you had some medical training when you were growing up in rural Kansas? No? How about when you were getting your BA in Philosophy in Denver? Maybe you learned something on the subject while studying canon law in Rome?

How dare a man who once refused the Eucharist to an autistic child and who instituted changes in his diocese to protect the Church from the costs of sex-abuse claims lecture doctors on ethics? Reasonable people will disagree on the issue of abortion, but if given a choice between losing mother and fetus and saving one, most people would opt for the second option rather than sacrificing lives on the altar of dogma.

As Linda Hunt, president of the hospital put it, “If we are presented with a situation in which a pregnancy threatens a woman's life, our first priority is to save both patients. If that is not possible, we will always save the life we can save, and that is what we did in this case. Morally, ethically, and legally, we simply cannot stand by and let someone die whose life we might be able to save.”

St. Joseph’s is a well-respected institution with a reputation for excellent care, particularly in the field of neurology, and here they are being punished for something they should be applauded for. It’s enough to make you see red, but the more I think about this story, the more I realize it could actually be good news.

As a result of the withdrawal of affiliation, St. Joseph’s doesn’t lose any money, since the Church was not directly funding them. They just have to remove the Blessed Sacrament from their chapel and will no longer be able to hold mass on premises. That doesn’t seem like such a high price to pay for a little autonomy and the ability to offer more comprehensive medical care.

Questions of patient care can now be made by doctors, rather than elderly men with no background in medicine and often an unhealthy dose of misogyny. Maybe now rather than “facilitating” contraceptive counseling and procedures, doctors at St. Joseph’s will be able to perform them for patients that want them. They won’t have to look over their shoulder, wondering if they will be excommunicated for acting in the best interests of their patients.

St. Joseph’s is open to under served communities of all religious backgrounds, not just Catholics, and now that the interfering hand of Rome has been removed, maybe the moral questions can be left to doctors, patients and their respective consciences.