Will Jon Stewart soon be another Al Franken? 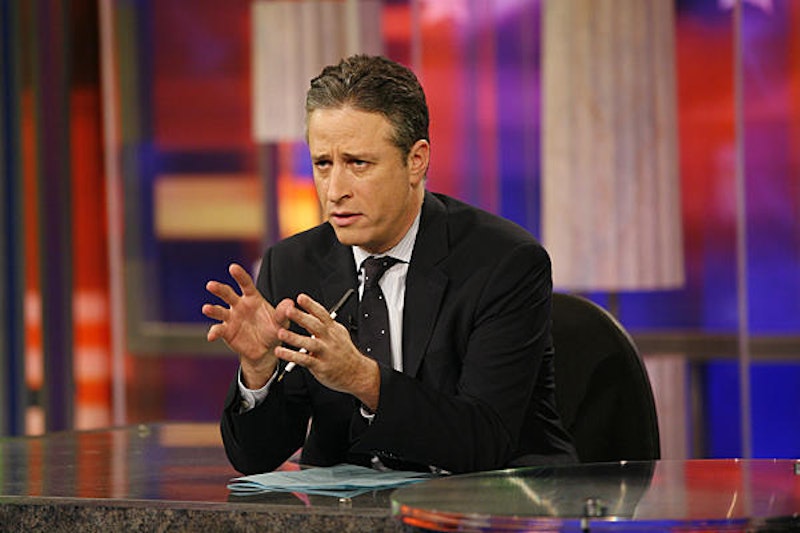 A piece in yesterday’s New York Times explores the idea that Jon Stewart’s vocal support of a bill pledging federal funds for 9/11 responders’ health care was key to its passage. The Times compares Stewart’s actions with those of Edward R. Murrow, who helped turn popular opinion against the McCarthy witch hunts, and Walter Cronkite, whose eventual disapproval of the Vietnam War is generally considered to be a critical factor in LBJ’s decision not to run for re-election in 1968.

This comes less than two months after the much-covered “Rally to Restore Sanity and/or Fear,” where the fun-sized fake news anchor wrapped things up by delivering a thoughtful speech about political moderation, declaring, “Sometimes the light at the end of the tunnel isn’t the promised land. Sometimes it’s just New Jersey. But we do it anyway, together.”

Not exactly an “I have a dream” moment, but it got everyone from Howard Stern to Oprah Winfrey wondering aloud whether Stewart should make the leap forward from commenting on politics to becoming a politician. Stewart dismissed the idea on Winfrey’s show, saying, “If I really wanted to change things, I’d run for office. I haven’t considered that, and I wouldn’t—because this is what I do well. The more I move away from comedy, the less competent I become.”

“My job is I make jokes,” he added. “I don’t solve problems. If my job became solving problems, I would suddenly become a lot less good at what I do, unless the problem being had by the country was a lack of jokes.”

Fine, yet it reminds me of remarks made by Al Franken. Back in 2003, Franken, riding high on the success of his then-current book, Lies and the Lying Liars Who Tell Them: A Fair and Balanced Look at the Right, was asked by Time whether he’d ever considered running for office: “Oh, no! First of all, if I took one vote away from a serious candidate, it would be a sin. Second, I'd be a terrible President. I would be crushed by the responsibility. I'm crushed by the responsibility of writing a satirical book.”

Franken hasn’t run for President (yet), but he was elected the junior Senator from Minnesota in 2008 (after no small amount of objections by the incumbent he defeated, the execrable Norm Coleman). While his legislative record to date is underwhelming, the mere fact that a former Saturday Night Live personality made it to the Senate floor doesn’t make a Stewart candidacy as absurd as it may once have seemed.

If we can have infotainment, certainly we can have legis-tainment, even if the most entertaining thing that Sen. Franken’s done so far is roll his eyes at the preternaturally smooth face of Mitch McConnell. The likes of Chris Matthews and Lou Dobbs have repeatedly flirted with the idea, and in the wake of Governors Schwarzenegger (California) and Ventura (Minnesota again) it seems like a safe bet that we’ll start seeing TV-bred candidates with increasing frequency.

Will Stewart be one of them? It’s impossible to say at this point. But as the “Rally”—which at first seemed like a comical one-off and quickly snowballed into an actual politically-tinged assembly—signified, Stewart’s got a message (although sometimes ill-defined) that a lot of people want to hear.

But one need look no further than Keith Olbermann—who went from smart-ass sports anchor to the nattering nabob of narcissism that he is today—to see that sarcasm and satire can quickly curdle into a cri de coeur … a Rally-ing cry, if you will. Stewart is made of more solid stuff than Olbermann, even if his “I’m just a funny guy” remonstrations can seem a little po-faced. And when the Times comes along to theorize that your support for a particular issue helped move legislation along, it’s impossible to hide behind the “I don’t solve problems” rubric.

As he nears 50, Stewart will eventually have to decide if he wants to continue being the funny guy on basic cable, make yet another failed attempt at taking over one of the broadcast networks’ increasingly devalued late-night slots … or try for something grander. At a time when a George Lopez joke about running for governor is treated seriously, the timing couldn’t be better.