Where To Draw The Line

Arizona is one the first states to actually address the prevailing issue of illegal immigration; problem is, the legislation goes much, much too far. 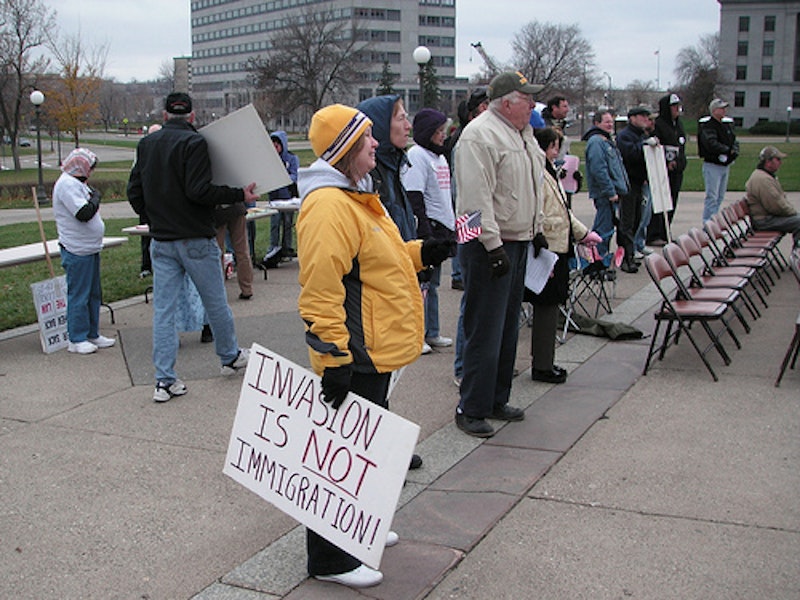 On April 23, Arizona Gov. Jan Brewer (R) signed into law Senate Bill 1070 Senate Bill 1070, one of the harshest immigration bills ever enacted. The bill requires that law enforcement determine the immigration status of anyone they encounter if a “reasonable suspicion exists that the person is an alien who is unlawfully present in the U.S.” Even legal immigrants who are not carrying their papers can be arrested for failing to immediately prove their immigration status. Additionally, it forbids localities from enacting so-called sanctuary policies, which would weaken the terms of the bill within their borders. The bill even allows private citizens to sue the local government if they feel they are not properly enforcing the law.

Other provisions of  the bill, designed to make living in the States harder for undocumented workers, include mandatory impoundment for vehicles used to transport illegal immigrants if the driver knows or “recklessly disregards” their immigration status; a misdemeanor to hire laborers off the street on the grounds that it blocks traffic; and a felony for failing to check an employee's eligibility to work through the Department of Homeland Security's E-Verify system.

Arizonans pay an estimated $1.3 billion to educate, provide medical care for, and incarcerate undocumented immigrants. As a major point of illegal entry, workers looking for better opportunities are immigrating right next to criminal elements from violent Mexican drug cartels and other organized crime syndicates.

However, draconian legislation like Bill 1070 is not the answer. First and foremost, the poor wording essentially allows for sanctioned racial profiling and requires private citizens to think like racists. How can an officer of the law establish whether there is a reasonable suspicion that someone is in the country illegally except by staring at the color of his or her skin? Undoubtedly, many native-born Americans of Central and South American descent will find they have to carry ID at all times or risk imprisonment. Likewise, would you offer a Mexican co-worker a ride home, knowing that your car could be impounded if you don't check their immigration status first?

Second, with Arizona currently facing a $3 billion budget deficit, this bill represents a very expensive gamble. One of the sponsors of the bill, State Sen. Russell Pearce, has repeatedly dodged the question of cost in interviews, but the fiscal analysis of the bill produced by the legislature states that there would be an increased financial burden for training, incarceration and prosecution. It declines to give an estimate, but similar legislation that was considered in Virginia was dropped when the increased costs were estimated at $14 million over five years. And that was only for one county.

This legislation will result in a huge legal burden on the state as well, since the immediate reaction will be a barrage of lawsuits representing legal immigrants and Latinos. The ACLU has already declared the terms of the bill unconstitutional, since it moves the power of regulating immigration from the federal government to the state level.

Even the economy is going to take a beating, ironically due to a lower number of illegal immigrants. The Perryman Group researched the economic impact of removing all illegal immigrants in the U.S. and they put the numbers for Arizona at $26.4 billion in lost economic activity, $11.7 billion in lost gross state product, and just over 140,000 lost jobs, even if time is allowed for market adjustment. Meanwhile, the negative perception of the state is likely to cause tourists, conventions and high-profile sporting events to take their business elsewhere. The Scottsdale Convention and Visitors Bureau have estimated their city will lose about $3.6 billion in annual revenue from out-of-towners.

While 1070 is not the answer to the immigration question, the issue nevertheless remains to be solved. Allowing current federal statues to continue unchanged is not an option. It fails to address the concerns of those living in the border states who deal with the impact of illegal immigration every day. It also fails to sufficiently protect a disenfranchised population living in our midst. Illegal workers are systematically underpaid and abused and the isolation brought on by the fear of discovery puts them beyond the reach of many programs and organizations set up to help them.

What Arizona and the country as a whole needs is comprehensive and smart immigration reform at the federal level. We need a policy that allows much higher numbers of unskilled laborers to enter the country legally and start on the path to citizenship. We need a policy that draws a clear line between hard-working and desperate people and those who enter the country to sell narcotics or commit violence. We need a policy based on facts, not fear. Most of all, we need to remember this is a country built on the blood and sweat of its immigrants and that not too many generations ago, it was our families who desperately wanted to come to this land of opportunity.