One Nation Under God

America was founded on the principle of equality under God, for better or worse. 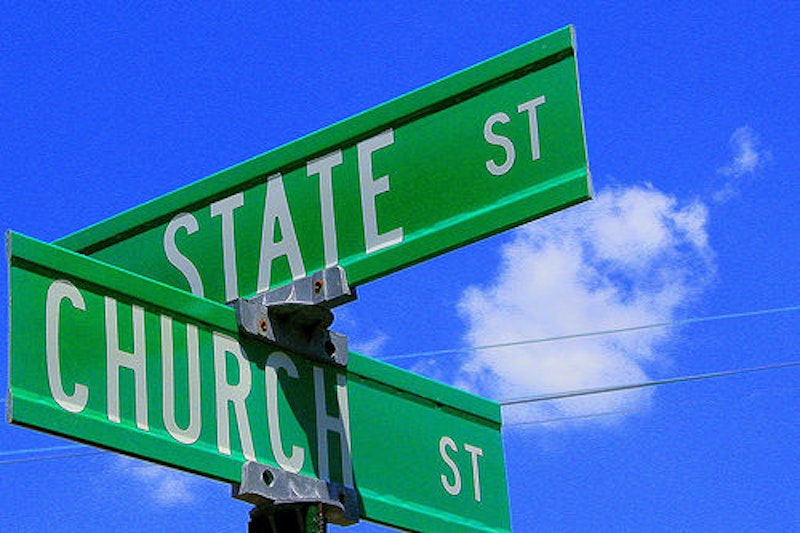 Secularizers in America have had a rough go of it. "Robert Ingersoll died yesterday. Perhaps he knows better now," mocked The Charleston News and Courier in memory of Ingersoll, the 19th century's most rabid Republican and apostle of agnosticism. Atheist firebrand Madalyn Murray O'Hair had some success with the Supreme Court and a few rousing appearances on Donahue but never had a prayer in the court of public opinion. She wore as a badge of honor the title "the most hated woman in America."

In this century, the brightest lights of so-called new atheist movement—Richard Dawkins and Christopher Hitchens—had to be borrowed from Britain. Sam Harris, our own hometown boy, turns out to be something of a Deist and a crank. Lately, he's taken to picking fights with his long dead freethinking forbear on the other side of the Atlantic, David Hume, for having had the bad manners to notice that it's awfully difficult to get to "ought" from "is."

None of this should be surprising, because America seems to take an almost cruel pleasure in making a hash of expert predictions about the death of God. Time famously asked if the Big Guy Upstairs had croaked and decided that he hadn't. God had simply moved to Dallas. As nations get richer, they were supposed to shrug off religion, but that didn't happen here. Compared to most European nations, America is rolling in it and rolling down the aisles.

There are many elaborate theories as to why American religion persists. The best answer is so obvious it's easy to miss: The founding idea of America is a theological statement. Take away the Almighty and problems sprout like crabgrass.

The greatest problem, one growing all the time, is equality. As we learn more about all the variables that go into individual human difference—intelligence, physiology, wealth, taste, etc.—it gets harder and harder to understand why equality was ever a meaningful concept. Well-meaning people over the last decade have become increasingly worked up over the fact that Americans are not getting worked up over income inequality. They need first to wrestle with the question, "Why ought we to be equal?"

Post-religious liberals don't realize that equality is unnatural or, really, supernatural. Nature is not about equality. It's about the food chain and the pecking order—survival uber alles, as a Germanic Darwin might put it. Therefore, our notions of equality must be grounded in something outside of nature. Invoking a veil of ignorance is an interesting parlor trick at Harvard, but most of us are simply not going to buy it.

The signers of America's Declaration of Independence cared deeply about equality, but theirs was equality under God. In those almost too-familiar words, they held it to be "self-evident" that all men were "created equal." Then they went further; perhaps to make sure we didn't miss the point. In his first draft of the Declaration, Thomas Jefferson had said some nice words about equality but had arguably grounded the rights of man in nature (in "that equal creation"). The committee sent him back to the drawing board.

The signers pledged their "lives," "fortunes," and "sacred honor" with a document that insisted men are "endowed by their Creator with certain unalienable Rights." The Declaration also spoke of the men's "firm reliance on the protection of Divine providence" to vindicate their cause.

These rights existed, in other words, not because men were equal with respect to income or ability or any of the other particulars that people tend to fixate on nowadays when they speak of equality. No, the signers were rights-bearing equals who had no need of a king because God said so and would work through history to vindicate their great cause. It was a crazy risk and all the smart money in the world was against them. But, somehow, they pulled it off.

Dwight Eisenhower has been mocked for saying, "Our form of government has no sense unless it is founded in a deeply felt religious faith, and I don't care what it is." His statement gets at something many Americans, well, feel deeply. And that is this: America's civil religion is firmly grounded in the diverse but overlapping religious beliefs of hundreds of millions of citizens.

Most Americans reckon, even if they cannot always articulate it, that the success of this country has a lot to do with her founding ideals. They don't know how you can sustain those ideals in a Brave New Atheist World and they don't wish to find out. Americans believe that we are, as the Rev. Martin Luther King Jr. liked to put it, "all God's children," subject ultimately to the same rule and the same Judgment. In order for that to be true, we need a God to sit in judgment—one capable of great compassion but also of righteous fury.