Ever Heard of the Treaty of Tripoli?

The author, an outspoken atheist, takes on Jeremy Lott's assertion America is anything but secular. 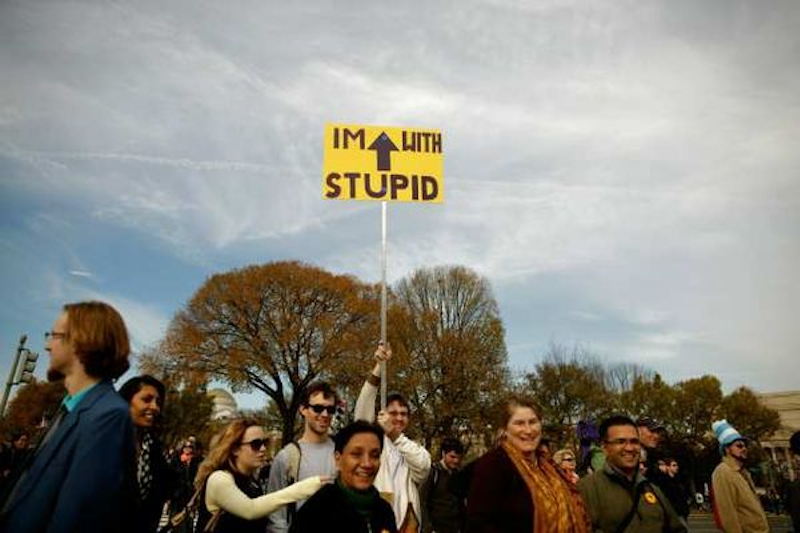 I’m an Atheist and quite outspoken on the subject. When I read Jeremy Lott’s article proclaiming that this country is anything but secular I had a hearty laugh. There is so much bullshit embedded in his words that for a moment I thought I was reading something from Bill O’Reilly. Most of Lott’s essay is filled with scribblings that argue on flawed semantics and desperately try to take things out of context in ways that would make a typical Fox News commentator blush.

According to Lott, the United States was founded on Christian ideals. I guess he’d know better than say, John Adams, you know, the country’s second president who signed the Treaty of Tripoli. This Treaty was supported by Congress of and contains the following:

As the Government of the United States of America is not, in any sense, founded on the Christian religion,—as it has in itself no character of enmity against the laws, religion, or tranquility, of Mussulmen,—and as the said States never entered into any war or act of hostility against any Mahometan nation, it is declared by the parties that no pretext arising from religious opinions shall ever produce an interruption of the harmony existing between the two countries.

I’ll ignore Lott’s ad hominem attempt to invoke the likes of Harris, Dawkins, and Hitchens. With his sort being the majority in America is it really any wonder that we have to borrow Atheist speakers from more secular nations?

Lott takes Darwin out of context, in what I can only assume was him covering his ears and shouting so that he couldn’t hear anyone tell him what Darwin actually said; that our society is different in how we take care of our fellow humans if they are injured or sick instead of leaving them to die, arguing that the brain could be much more important than fleshly brawn, and warning that practices like eugenics could remove our humanity.

Lott believes that the Founding Fathers stood by equality because God said so. I think a certain biblical personage, Samuel, would disagree; what with the talk of obeying one’s Earth-born kings and all that jazz. If they were doing what God wanted them to they never would’ve asked if it was possible for more taxation on the tea. Let me re-address the argument about what is natural and with the same brush, paint Lott in the same light as Pat Robertson. How many of you get your food from a grocer? How many of you are eating food that has been brought to you the same way as the hunter-gatherers of the Stone Age? Most of you get your food, water and shelter through bounds of genetic, chemical, and mechanical engineering. If we did things based on whether or not it was natural, billions would starve, dying from a lack of good drinking water and exposure to the elements. I won’t even get into the hand-held computer most people call a smart phone. Of course equality isn’t natural. And neither are a lot of the things anyone uses in this modern society, a whole lot of them brought to Lott by Atheists. Just because something is natural it doesn’t make it right.

Let’s think about religion in the United States, and how Atheism is on the rise. I’ll give you a couple reasons why I think it’s grown so much. George W. Bush and other pillars of religious extremism—Anders Breivik, bin Laden, Hitler and Joseph Ratzinger— have kind of painted religions for what they are. All religions and some of their notable followers have done horrible things in the name of their Gods (I’m going to quibble now because, like it or not, Jews, Christians and Muslims have the same God). The Nazis committed genocide with the logo “Gott Mit Uns,” or “God is with us.” Shocking. Almost as shocking as Hitler’s baptismal certificate or maybe the Reichskonkordat, a pact between the Church of the Holy Roman C and the Nazis, signed by a Pope who unreservedly supported the idea of killing Jews. And yes, I’m going to bring up the fact that Ratzinger was a Nazi. He served until it looked like he was on the wrong side and then, like many Nazis, gained protection from the church. Somehow I’m sure Lott will say Catholicism is not his brand of Christianity.

Every time some nut like bin Laden (Muslim) or Breivik (Christian) does something violent in the name of their religion it scores one for the Atheist cause. I defy Lott to show me one single atheist who thinks it’s acceptable to go and fly a plane into a building or shoot children on an island to make a statement. There have been several presidents that have stated that religion and government are to be kept separated. Lincoln, the first elected Republican, felt that way and said so publicly. What Christian would want someone else’s brand of Jesus shoved down their throat? The Founding Fathers who were religious were just as aware of this basic fact as the non-religious founders were. Yes, there were the non-religious in that mix.

Lott closes by trying to argue that without his God, American society would fall apart. It doesn’t seem to be that way for the Japanese or the Norwegians. In fact, considering that the USA isn’t even in the top 50 safest nations, whereas Atheist nations tend to be safer and more peaceful, I’ll just come out and say it: Jeremy Lott has no clue what he’s talking about. There have been studies that show a correlation between education and religious views, more specifically a lack of religion tending to occur the more educated one becomes. As for religion holding this nation together, where the heck does Lott get that impression? The US has hit the debt ceiling how many times? Job loss is out of control. I won’t even touch the erosion of basic civil liberties and human rights at the hands of very religious politicians. Maybe it’s because Lott has his head up his ass, but when the deeply religious try to oppose life saving medical breakthroughs, when the deeply religious use their religion to justify slavery or eugenics, you have to wonder where he gets his ideas from.