The United States, while in the throes of economic despair, isn’t the chaotic country it was in 1968. 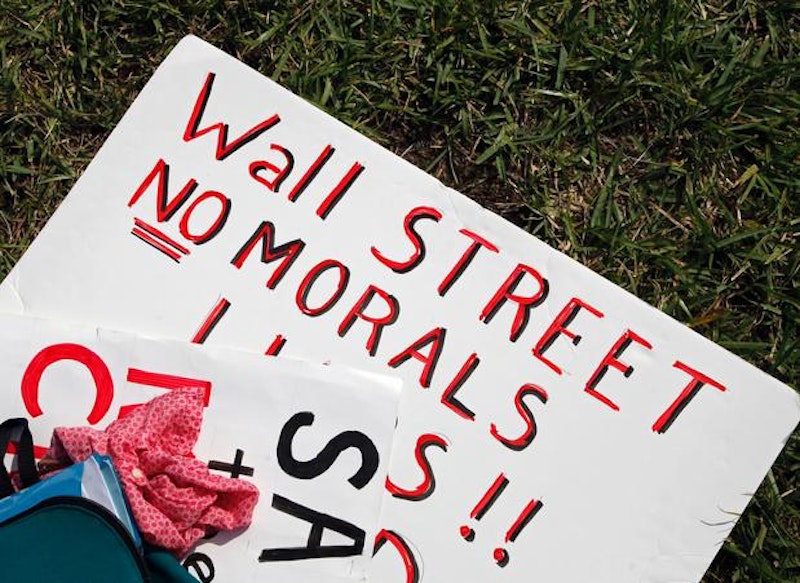 Although the Occupy Wall Street movement/street theater is currently on sabbatical, there are promises from protesters who can still grab a reporter’s ear that the mildly tumultuous (by historical standards) events of the fall will re-surface early next year, in time to play a part in the 2012 presidential election. New York magazine’s industrious John Heilemann, who “immersed” himself in the “world” of the OWS strategists and hangers-on for the past month, wrote a plausible cover story last week that undoubtedly set off an alarm for his competitors and, giving Heilemann his due, will set up the “narrative” for the upcoming election. The headline of the article is bound to become familiar fodder in the political media: “Occupy 2012: Will it be 1968 all over again?” Activists told Heilemann that both the Democratic (Charlotte, NC) and Republican (Tampa Bay, FL) will be “occupied.”

So you thought the SDS, Abbie & Jerry, Eldridge Cleaver & Huey Newton, pedantic anti-government treatises and, in modern parlance, victorious fist-bumping were the stuff of history and nostalgic bedtime stories for the offspring of Boomers? Not so fast: it’s a near-certainty that Rolling Stone proprietor Jann (1%) Wenner has a commemorative “1968/2012” edition ready for release in February. Right on, and let’s stick it to the man.

Although the political and cultural landscape of these two election years are utterly different, there are a few parallels. The 2012 election pitting Barack Obama against Who Knows is the most unsettled, and weird, since ’68. The Vietnam War and the never-ending Great Recession fomented anger and protests (though the numbers this time around are much smaller), as both the Military and Banks were deemed Too Big To Fail. And there’s a degree of self-interest on the part of many participants. In the 60s, students demonstrated and at times became violent because they didn’t want to be drafted into an incomprehensible war; today, a sizable number of under-30 OWS squatters are demanding that their student loans be forgiven. (You’d think that universities would be targeted for that reason alone, but I suppose it’s the greedy Wall Street barons who are responsible for tuition indebtedness.)

It doesn’t give me much pleasure to be the guy who starts vacuuming and taking out the trash at 11 p.m. while a raucous party is happening, but as much as the media is desperate for a sustained storyline for 2012—Herman Cain’s, no insult intended to the Greeks, Icarus-like candidacy and Rick Perry’s pre-senior moment about the age requirement for voters are just passing blips—the comparison of this year to 1968 just doesn’t work.

While the unemployment rate that year never touched four percent, in contrast to today’s 8.6 percent, the United States was a far more dark, divisive and explosive country 44 years ago. The riots and looting in cities after Martin Luther King Jr.’s assassination (after several years of previous rioting), from which parts of D.C. and Baltimore still haven’t recovered, were so shocking and devastating that the subsequent murder of Bobby Kennedy in June and then the August mayhem at the Chicago Democratic Convention were almost expected. When Sen. Abe Ribicoff blasted fellow Democrat Richard Daley, old-time boss mayor of Chicago, on the convention floor for his “gestapo” law enforcement, it was a symbolic moment for the upending of America’s political apparatus. The two-month campfire at Zuccotti Park, while at least in part sincere, seems like a Buffy St. Marie/Joan Baez concert in the quad of a Massachusetts college in comparison.

And aside from the griping about income inequality, the United States is far more tranquil today. In ’68, there were still “generation gap” fights between parents and kids over the length of hair; racially mixed couples, even in New York, didn’t hold hands in public; the concept of gay marriage was as futuristic as flying cars; abortion was illegal; and kids puffing on reefers were constantly paranoid that they’d be nabbed by the “pigs” and sent off to the pen for 10 years. Furthermore, despite all the yakking about political polarization today, in ’68 it was sheer chaos, with third party candidate George Wallace, the former segregationist governor of Alabama, taking votes from Hubert Humphrey (winning five states and 46 electoral votes in the election) that helped ease Richard Nixon into the presidency. Democrats today dream about a right-wing or libertarian candidacy—Sarah Palin or Ron Paul—that’ll assure Obama’s reelection, but unless the dynamics change dramatically, that’s unlikely. The Republicans, who are nervous about Mitt Romney’s wishy-washiness and Newt Gingrich’s breaches of common morality, are so desperate to oust Obama that they’ll unite behind their candidate.

Members of the mainstream media—a term that gets fuzzier every six months—are mercenaries: though overwhelmingly centrist/liberal in personal views, there’s hardly a reporter or pundit in the country who’d squelch a juicy story even if it undermined a politician he or she agreed with on social/political issues. It’s in the media’s interest that the OWS participants cause a ruckus, just as the Tea Party rallies were the fodder for far too many stories. But 1968 redux is wishful thinking: the elements simply don’t exist for an encore.