Obama and Liberal Intelligentsia Shed Dignity Ahead of 2012 Election

While the President dithers and hides, media enablers plead for votes from his disappointed ’08 supporters. 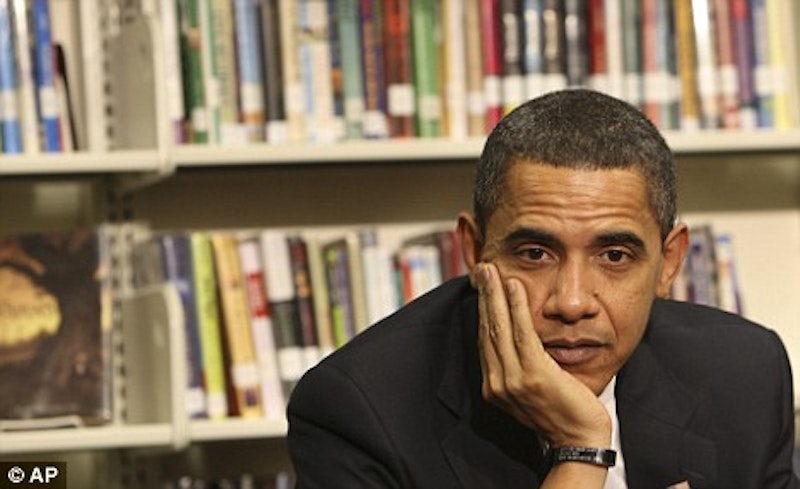 Barack Obama has yet to add a “killer rabbit” incident in his growing list of parallels to Jimmy Carter’s failed presidency, and his quiver of good luck arrows isn’t so depleted that he’s attracted a principled Democrat to mount a challenge for the Party’s nomination, but as 2011 dwindles away into holiday distraction, the erstwhile political magician is running out of gas. That’s Obama’s car in America’s ditch right now, and the owner shows little interest in repairing the damage. At least the hapless Carter, when Teddy Kennedy announced his primary bid in late-1979, had the gumption and competitive spirit to tell anyone who’d listen that he’d “whip [Kennedy’s] ass. Obama, on the other hand, appears listless and bored, and is apparently counting on winning a second term as the lesser of two evils.

Three years ago, after Obama’s historic election, even those who didn’t support him would undoubtedly be astonished that America’s supposed savior would remain on the sidelines as the bipartisan “super committee” failed last week, perhaps purposely, to reach any sort of compromise on deficit reduction. Perhaps his political advisers told Obama to vanish—even though it was certain that the outcome would shatter the financial markets—and make plain that he’s taking the low road of blaming Republican extremists (“obstructionists” as they’re called, as if no Democrat has ever stymied a GOP president’s program) for the ongoing economic crisis until next November. This doesn’t square with the heady first months of Obama’s tenure, when he was described by delirious journalists as a combination of FDR, JFK and Abraham Lincoln, a man who’d be remembered by historians as a “transformative” president who nullified the damage his predecessor caused during the previous eight years.

Why wasn’t Obama, in public, on television angrily insisting that the committee reach an equitable compromise or face disgrace? Why didn’t Obama, in private, emulate LBJ and threaten Democratic legislators with the loss of federal pork and the Party’s support in their own upcoming elections? It’s mystifying, really, that Obama continually eschews the opportunity to demonstrate the leadership so often promised during his ’08 campaign. As Peggy Noonan wrote in The Wall Street Journal last weekend, Obama’s “instincts” haven’t adapted to the entirely different political and economic culture that’s emerged since he announced his presidential candidacy four years ago. Noonan: “[E]veryone else in America knows the crash and the underlying crisis it revealed—on our current course, we are bankrupt—changed everything. Strangely, inexplicably, the president thinks the old political moves apply to the new era. They do not.”

Here’s an important fact to remember: Obama defeated John McCain (who ran one of the worst presidential campaigns in my lifetime) by 7.2 percent in the popular vote. It wasn’t a landslide: in fact, despite the enormous turnout of first-time and casual voters who rode the Obama wave, in 1988, George H.W. Bush bested Michael Dukakis (a dud, but not as incompetent as McCain) by a superior 7.7 percent. And in 1980, Ronald Reagan, dismissed by liberal pundits as a nitwit not long before the election, dispatched Carter by 9.7 percent. Unless Obama somehow rediscovers his audacity of awesomeness, a near-impossibility given the unemployment rate and his own diffidence, it’s very difficult to believe that his campaign will generate a level of enthusiasm that even approaches 2008.

Some naïve pundits predict that this fall’s wave of Occupy Wall Street protests will help re-ignite the passion for the President. That’s doubtful for a couple of reasons: one, the most vocal OWS squatters consider Obama as part of the problem and won’t vote for a man who takes money from the infamous 1%; two, there’s no way to measure the effect of the OWS movement on the population at large, and I don’t think it’s simply a hunch that for all media fawning over Zuccotti Park Camp, most Americans aren’t paying much attention, far more concerned with their own debt and job prospects.

Nicholas Kristof, an Obama apologist, is typical of the whining from the liberal intelligentsia that’s now gearing up in earnest. Writing in The New York Times on Nov. 27, Kristof conceded that Obama “badly underestimated the length of this economic crisis” and has been “surprisingly inept at communicating.” Kristof despairs that Obama is a “piñata” for liberals and conservatives alike, and hopes the former will remember all his accomplishments, such as preventing a second Great Depression (true, so far, although we have no idea whether McCain would’ve also staved off that catastrophe), his “superb” record on education (parents throughout the country might choke on that notion), “bolster[ing] regulation of the tobacco industry,” killing bin Laden, “leading the international effort to overthrow Muammar el-Qaddafi” (Nicolas Sarkozy and David Cameron might pass gas at that assertion) and, naturally, passing a health care reform bill that’s eluded presidents “since the time of Theodore Roosevelt.” One can, conceivably, be charitable and give Kristof wide berth since he’s abroad so often, but ObamaCare is not, understating the reality, without its detractors. I’m fortunate to have a decent health insurance plan—I stress “decent,” because it’s not the 1990s anymore—but since Obama’s signature legislation passed, my checkbook has taken a beating, as the insurance company has compensated for the full implementation of ObamaCare by getting even stingier with reimbursement for ordinary medical procedures. I don’t believe this is uncommon.

Kristof takes the trouble to quote two impartial observers to buck up the troops. Both Democratic Sen. Dick Durbin and Bill Clinton told the columnist that they’re certain Obama will be re-elected, even if, in Durbin’s words, it won’t be like the “first date” voters had with the President four years ago. The soothsayer either couldn’t, or wouldn’t, contact a Republican to ask his or her opinion.

Frank Rich, who mercifully left the Times for New York magazine earlier this year—and writes less frequently—recently tackled the Obama conundrum from a darker angle, claiming that the President is subject to a level of “hate” unseen since JFK’s assassination. That might come as news to George W. Bush, who, looking at Google, draws over 32 million comparisons to Nazis and Hitler; Obama rates half that number. In fact, Rich’s New York colleague Jonathan Chait, who has also cautioned liberals that the alternative to Obama would be devastating, opened a column for The New Republic in September 2003, with the words, “I hate President George W. Bush.” Chait then catalogued everything he hated about Bush, from his policies to the way he walks.

Rich devotes most of his long essay to a musing about JFK—and his presidency as a “half-remembered dream” that was “beautiful, even erotic, but somewhat weightless in content”—and the vitriol directed at him in Texas back in ’63, and though he doesn’t say it, the implication is that Obama, whom Rich finds quite similar to Kennedy in his political “centrism,” wariness of the “institutional left,” and “ardent” belief in capitalism, could be assassinated as well. Maybe so, though like the vast majority of Americans, I certainly hope not. Rich doesn’t mention that Presidents Ford and Reagan were also the victims of assassination attempts. He continues that both Obama and JFK inspired “a hatred so nightmarishly disproportionately to their actual beliefs, actions, and policies that it’s worthy of Stephen King’s fiction.

The inescapable conclusion from Rich is that Obama will run as a victim of right-wing thuggery, as opposed to a mediocrity who may persevere simply because of an unpopular opponent. In the Times last Sunday, Ross Douthat, the often indecisive conservative columnist for that paper, shoos Rich’s analysis away as if it’s the work of a hack Boomer who’s lost in the fog of Camelot. Also writing about JFK, Douthat makes the Obama comparison, without naming the current president, and says the ongoing “J.F.K.” cult matters” because “We confuse charisma with competence, rhetoric with results, celebrity with genuine achievement.”

Douthat’s not incorrect, particularly in today’s media-as-sewer culture, but I’d argue that the charisma that once defined Obama has long since evaporated, and if he does get re-elected—a not unreasonable assumption—it’ll be the result of negative campaigning and a superior organization that can somehow deliver votes. It’ll be a back-alley election, as opposed to Obama’s Yellow Brick Road journey in 2008.