Once Again, Paul Krugman Says He's "One of Us" 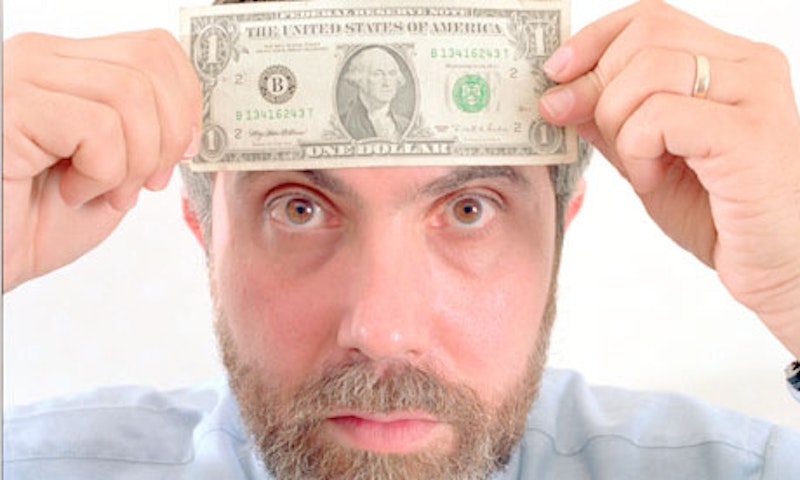 New York Times columnist Paul Krugman—or, if you prefer Dr. Krugman, Prof. Krugman, or St. Paul—is inordinately fond of quoting fellow Princetonian F. Scott Fitzgerald. Not really unusual for a man his age—perilously close to 60—but the fraudulent manner in which he interprets the novelist’s words is what rankles me. Granted, Krugman is no stylist—and it’s possible even he realizes that—but when he opened his July 20 op-ed, “Pathos of a Plutocrat,” with the most famous Fitzgerald observation, “Let me tell you about the very rich. They are different from you and me,” he jumped the exceedingly high bar for condescension that’s a staple of his commentary.

Explaining to rapt readers in the increasingly niche-drive Times demographic (all very liberal, all the time, and no, David Brooks doesn’t count as a dissenting voice) that Fitzgerald wasn’t just referring to the size of one’s bank account, but rather that “many of the rich expect a level of deference that the rest of us never get to experience and are deeply distressed when they don’t get the special treatment they consider their birthright.”

This is flat-out repugnant: first, Krugman including himself in “the rest of us” is an insult to every American who, unlike Krugman, doesn’t have three residences, numerous streams of income and expensive accountants to complete his taxes. Second, and this isn’t confined to Krugman alone, but includes his fellow Times plutocrat Thomas Friedman and publisher Arthur Sulzberger Jr., is Krugman so delusional that he doesn’t recognize that he, workaday Paul, is accorded “a level of deference,” among the power elites in the media, academia and rarefied economic community that, ahem, 99% of Americans will “never get to experience”? I do think Krugman is so blinded by his hate of Mitt Romney (maybe on a personal as well as political level, maybe not) that he, in his quest for the John Maynard Keynes Award for truth-telling has solidified his status as a functional nutter.

Then again, perhaps it’s yours truly who’s the nutter. One of my older brothers suggested as much—more politely—nearly two years ago when I wrote a story headlined “Paul Krugman Finally Flips His Lid," telling me, “Pal, just don’t read the guy!” On that occasion, Sept. 20, 2010, when even Krugman could smell a Democratic bloodbath at the polls that November, he blamed it all on “the very privileged… who are outraged, outraged, at the thought of paying modestly higher taxes.” And, as sure as Brooks will repeat his kinship with President Obama because they both fancy Edmund Burke, Krugman goes to the Fitzgerald trough (no attribution this time), writing, “You see, the rich are different from you and me: they have more influence.” Never mind that the GOP landslide that fall was so resounding, that it wasn’t cheesed-off “plutocrats” who cast 1000 ballots apiece.

Again, I don’t begrudge Krugman his wealth or status; he is, by all accounts, a very industrious and smart man. But his pretension of being an “ordinary American” is dishonest and disgraceful.