Telling Barney About His Pants 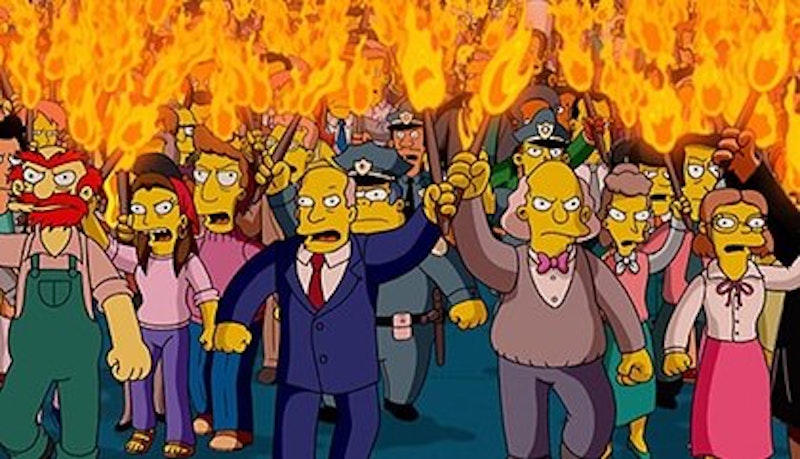 The Lewinsky impeachment, WMDs, Palin, the death panel garbage. There's a pattern to the right's behavior and it should have a name. If I wrote a script for President Obama, I’d want him to say, “This is a Springfield moment. This is people getting worked up just to get worked up. Right now Moe's got his torch out and everybody's full steam ahead, but before the next commercial they're going to decide everything wasn't so bad after all.” Eventually he'd be able to say, “America has had its Springfield moment and now we've got to move on. No more, we've learned.” Crazy late-era America could stop being crazy and waddling about with its pants dipping. The fits would end.

“Springfield moment” is from The Simpsons, of course. It's an ancient show and not too funny nowadays. But it's given a lot, and one of its gifts is this concept: When any collective entity, and especially the American public, passes into a state of non-reason marked by frantic and pointless activity, that would be a Springfield moment. The burst gets little done and events return to normal, more or less, but in the meantime everyone at large acts up in a way that's big and stupid. In 2008 the Obama campaign fell back on the term “distraction” when discussing this sort of flap. I think that's a bit blank and impersonal. “Springfield moment” would communicate.

The attitude that goes with the phrase—an attitude we can sum up as “Come on already, snap out of it”-—has been part of the liberal makeup since at least the Reagan years. When Reagan proved a success, liberals came to see him as a carnival master who kept the public distracted with fireworks and jet planes while our SAT scores rotted from the inside. His era was viewed as an episode of mass childishness marked by a collective flight from reality. It was a Springfield phenomenon before Springfield came to birth. Now we have the term and ought to use it. When people are milling about because of a new bogeyman or two-minute wonder, we have a piece of language for calling them out.

Personally, I think it's fair comment. The right's bogeymen and triumphs have been a series of big fusses over very little. The left has had one good-sized burst of Springfield-ism, the Obama “Hope and Change” campaign. But at least that was benign. All the noise and thrills induced a fit of hopefulness, not fear or resentment. After the great O carnival of 2008, of course, all we've had is a man trying to patch American society while it can still be patched. That's hope and change? Huh. But the work does need to be done, so there's that.

The American liberal: his situation. The right says liberals try to get in under false pretenses. If so, one would be the pretense that we want to do something grand, something interesting. We don't, actually. Our aims are limited and reactive. Telling America it needs public health insurance is like telling a fat man he needs a belt. The conclusion is forced upon you, and even when steps are taken the situation remains unpleasing. The best you can say is that his pants are now up instead of down, and in the meantime you've offended him.

Liberals find themselves in that sort of jam. If there was ever a friend who needed a friend to tell him not to drive drunk, it is present-day America. But just try being that friend. Even wanting the job indicates an unlovable personality: explaining people to themselves is impertinent. It's also why liberals are alive, and our defense is only that we're not wrong.

The right doesn't explain America to itself. It bangs pots and pans about made-up crises and the occasional alleged miracle. The right says America's great but being cheated, that someone is getting between Americans and their honor or their security or the right to live out their lives. The right says this good and loud, with great flair and a conviction that soars above fact. Meanwhile, liberals want that dumb noise to stop so America can hear us talk in its ear. Our plan is to tell America exactly what we've figured out about it. Good luck.

Something about Harvard. Obama is one of the few liberals to break through. That was in 2008, with his Philadelphia speech about race. But around the same time he was bit on the ass by comments he had dropped about the ways of small-town whites left behind by the economy—the “bitterly cling to guns and religion” episode. A rule for politicians: Working-class whites don't get held up for explanation. They are the given, the backbone; the rest of us pretend to be add-ons. Because he forgot this, Obama experienced months of grief from Hillary Clinton as she posed with beer mugs.

So telling the folks about themselves is a tricky business. Somebody has been doing it quite well, and that's according to the folks themselves. Anybody who has watched The Simpsons knows that us, the American people, are the joke. And the joke is told by really smart guys, Harvard guys in large part. All these decades, Harvard has been recruiting undergrads from towns across America. I guess that's why the Simpsons writers’ room can give us material about rip-off water slides. They also tell us what smart-ass liberals think of the American people, especially working-class and lower middle-class white American people. When America laughs at Springfield, it's laughing at how dumb it looks to the people who placed out of ordinary life and joined the elite because of their board scores.

The picture comes down to this: Springfielders are like popcorn that's always on the skillet. Their brains keep hopping, and they have no idea why. They're a mob made up of would-be individuals but collectively jolted by a rumor or a bad metaphor or a TV commercial for Gabbo. I think that's all fair comment, and the public seems to think so too. The next time the country's necessary patch-up work is threatened by a pleasant fit over nothing, I hope the president uses the term “Springfield moment.” At the very least, it's a polite way of saying, “Don’t be an idiot,” and nowadays America needs someone to say that as often as possible.