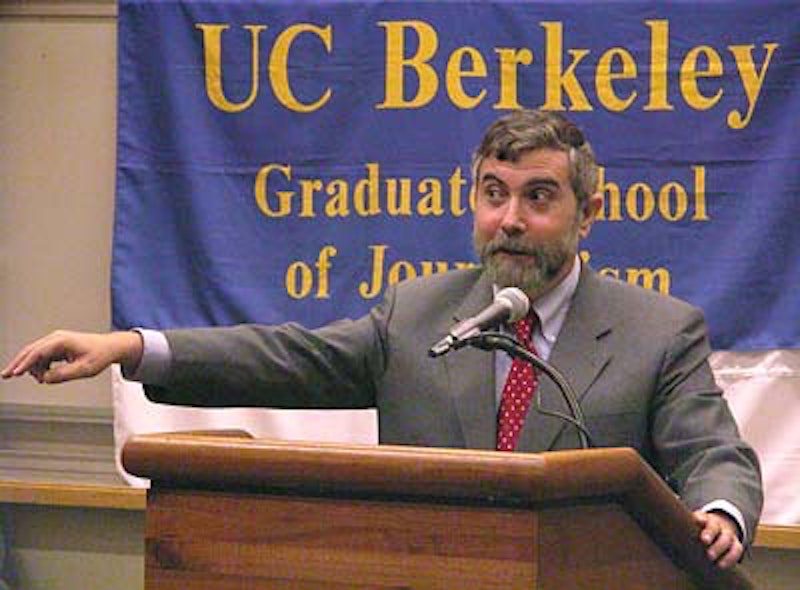 Anger is sweeping the top echelons of The New York Times. True, this white-hot rage is a minority phenomenon, not something that characterizes most of the company’s employees. But the angry minority is angry indeed, consisting of editorialists and columnists who feel that things to which they are entitled—like political influence—are being taken away. And they’re out for revenge.

Okay, so I re-jiggered the first paragraph of the wealthy populist Paul Krugman’s Times column from today, but that’s really the only way to make sense of a man who’s finally gone crackers. Krugman’s latest crusade is about the Congressional debate on the soon-to-expire Bush tax cuts and his contempt for the two percent of Americans who object, during a recession, to having their taxes raised to Clinton-era levels. It’s Krugman’s contention—and it’s here where he takes a far more novel approach than his similarly affluent and elite left-wing “big thinkers”—that the chaotic political environment today owes more to Mr. and Mrs. Moneybags than the loosely cobbled together Tea Party. Points for originality, since he didn’t even mention Christine O’Donnell, Fox News or Rand Paul in his piece, but still nuttier than even the online rants of a kook like Michael Moore.

Krugman re-states the obvious for the record: that in this prolonged economic downturn poverty has increased, jobs are scarce for the young and old alike and the housing market is a nightmare, with foreclosure signs more common in neighborhoods that lawn billboards for political candidates. It’s then that the Nobel Prize winner/Princeton professor/pundit/lecturer-for-hire begins to drown in his own spittle, writing, “Yet if you want to find real political rage—the kind of rage that makes people compare President Obama to Hitler, or accuse him of treason—you won’t find it among these suffering Americans. You’ll find it instead among the very privileged… who are outraged, outraged, at the thought of paying modestly higher taxes.”

So, by Krugman’s logic, it’s the wealthiest two percent of Americans who have swamped the polls for primary elections that have upended the political status quo; who flocked to see Glenn Beck in Washington, DC a few weeks ago; and are fomenting anti-immigrant vigilante mob mentality in the border states because jobs are being swiped from “real Americans.”

This is truly priceless. I don’t deny that the very wealthy in general aren’t happy with Obama’s rudderless economic policies and no one, except perhaps Bill Gates and his father, likes to pay higher taxes. But the reality, as Krugman’s employers might tell him in a private moment, is that extraordinarily wealthy people pay a lot of money to accountants and tax attorneys to find loopholes, shelters and the like. The editorial writers at the Times have long championed confiscatory estate taxes, a fair enough opinion, but just once I’d like to see a disclaimer that explains how the Sulzberger family, which owns the Times Co., has dodged those very taxes that would necessitate a re-structuring of their 114-year-old enterprise. As Krugman concludes in his column—in another context—“Sacrifice is for the little people.”

But richness abounds in Krugman’s 800 words. Buckle up: “The spectacle of high-income Americans, the world’s luckiest people [some wealthy Americans worked very hard, and took risks, to accumulate their fortunes, but in Krugman’s world, they’re all layabouts], wallowing in self-pity and self-righteousness would be funny, except for one thing: they may well get their way… You see, the rich are different from you and me: they have more influence.”

It goes without saying that 100 percent of America’s unemployed would gladly trade bank accounts with Krugman, and might well be offended that he has the audacity to link himself with the less fortunate who have no money and no influence.

And, in fact, in Krugman’s blog “The Conscience of a Liberal” later on Sept. 20, he sort of fesses up, perhaps because of what’s perceived as a less formal venue. He writes: “I lead a very privileged life (yes, I’m well into the range that will pay higher taxes under the Obama plan), yet even now I find myself experiencing occasional flashes of green-eyed envy. (What? You’re driving me back to the airport in Sao Paulo, in all that traffic? Don’t I rate a helicopter?)”

I don’t begrudge Krugman his wealth or privileged lifestyle; he’s fulfilled career goals not by luck but by dint of his own industry. And though of course he has an accountant who works on his annual taxes, I’ll take him at his word that he won’t grumble if the Bush cuts expire. But he’s not unemployed, he hasn’t lost one of his three houses to foreclosure and he’s not going to bed hungry. Krugman’s words wouldn’t have the whiff of the left-wing equivalent of a “birther” if he were to admit that he’s not an “ordinary” American.