David Brooks: I'm Paid To Write About Nothing

The Times columnist, like the BlackBerry, is a relic. 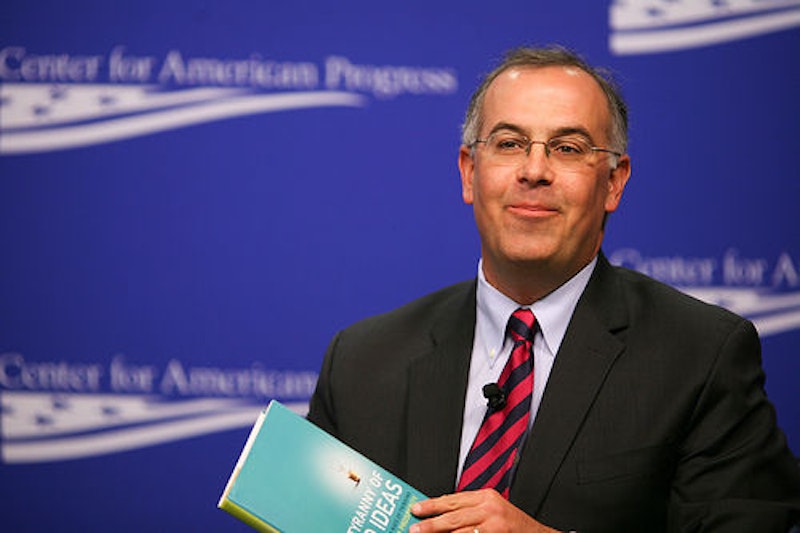 David Brooks, America’s Most Famous Failed Red State/Blue State sociologist, who doubles as a New York Times op-ed columnist, pulled off a neat trick in Tuesday’s NYT. Maybe it was intentional, just to see if his newspaper’s editors were awake, but Brooks’ slap-dash essay “Dullest Campaign Ever” now ranks as the “Dullest Political Column Ever.”

A dues-paying member of the Beltway Intelligentsia, Brooks felt compelled to let readers know that… politics has changed in the past generation. Could be wrong, but I swear that Brooks tapped out this piece on a handheld device during the slow parts of a Masterpiece Theater television program. In about 15 minutes. How else to explain the contradictions and anachronisms contained within? For example, Brooks begins by agreeing with The Wall Street Journal’s Peggy Noonan that the current presidential campaign is both “incredibly consequential and incredibly boring at the same time.” He then lists nine reasons why, and gets into trouble on the very first one.

Brooks: “This race is the latest iteration of the same debate we’ve been having since 1964 [when Brooks turned three]. Mitt Romney is calling President Obama a big-government liberal who wants to crush business. Obama is calling Romney a corporate tool who wants to take away grandma’s health care.”

As some may recall, the Barry Goldwater/LBJ election in ’64 centered around foreign policy—Goldwater’s aggressive Vietnam stance earned him the slogan, “In your guts, you know he’s nuts”—and civil rights. The unemployment rate that year never rose above 5.6 percent. Yes, Johnson pushed an ambitious spending program that year—and was popular until he (as Democrats feared about Goldwater) went nuts over Vietnam—but the debate isn’t remotely the same in 2012.

Brooks goes on to complain that the Obama and Romney campaigns are focused on the “uninformed,” the “undecided voters, who don’t really follow politics or the news.” Maybe it hasn’t occurred to Brooks while he’s casing out a Wal-Mart in a Virginia suburb for his next book, but the majority of Americans, even those who do their duty and trudge to the polls at least every four years, as registered Democrats or Republicans, also don’t “really follow politics or the news.” Not everyone toasts themselves and friends in Georgetown or Manhattan at dinner soirees and ruminate about the deep significance of Mitt Romney’s suggestion that the Brits weren’t quite prepared for London’s Olympics. More likely they’re putting their kids to bed, watching a ballgame, filling out unemployment forms, scouring Craigslist for the fifth time that day or dreading a five a.m. alarm clock ring to prepare for a 10 a.m. domestic airplane flight.

I agree with Brooks that both campaigns are slaves to today’s hurdy-gurdy media world, and are forced to navigate one-hour news cycles rather than the 24-news cycle of a decade ago, let alone the week-long cycle of 1964. And it’s true that reporters, even the good ones, are betraying their craft by rushing “scoops” online and writing continuous blogs lest their employers hire a 22-year-old in their stead, but Brooks doesn’t even mention Twitter, easily the prime offender in the story-a-minute political culture of today. He writes: “BlackBerrys and iPhones mean that campaigns can respond to their opponents” instantaneously.

Does anyone even use a BlackBerry anymore?

He concludes: “[D]ishonesty numbs. A few years ago, newspapers and nonprofits set up fact-checking squads, rating campaign statements with Pinocchios and such. The hope was that if nonpartisan outfits exposed campaign deception, the campaigns would be ashamed to lie so much. This hope was naïve… It’s impossible to take ads seriously. They are the jackhammer noise in the background of life.”

This last doozy might be actionable if the Times didn’t fear antagonizing Brooks and having him scoot off to a competitor in a fit of pique. Really, when you talk naiveté, Brooks has ralphed it up all over his sensible button-down dress shirt. Does anyone under the age of 60 recall a time when negative political advertising wasn’t the norm during a presidential (or Senate) campaign? Yes, the volume of advertising is higher, but most people tune out at spot #50 in a given week, so the next 500 mean nothing.

Like the BlackBerry, Brooks is out of fashion. I used to read his Weekly Standard essays, and though I winced throughout, usually finished them. His NYT columns? Maybe one every other week. I guess this particular Tuesday was a slow day.