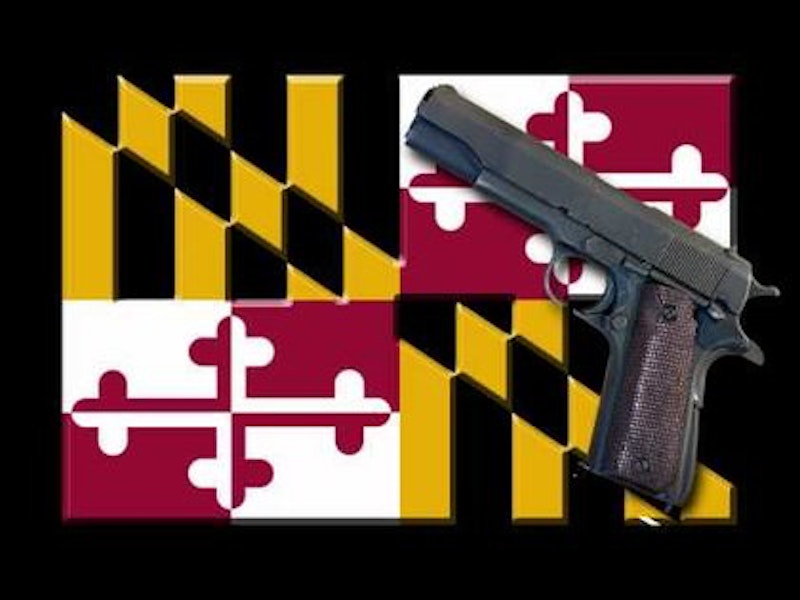 “It makes Maryland into a normal part of America,” Alan Gura, of the pro-gun Second Amendment Foundation, was quoted as saying. “This is the way that the law operates in other states.”

The one thing Maryland has never striven to be is normal, or like other states, if the National Rifle Association definition of normal includes Aurora, Columbine, Virginia Tech and Tucson. In fact, since 1973, when Maryland adopted the most restrictive gun control law in the nation at the time, the state has been happily out of step with the 40 or more states that issue gun permits as readily as fishing licenses.

In Maryland, a carry permit is a tough sell and a meritorious achievement for those who have them. Hotheads, social deviants and other misfits have to park their tempers and hang-ups for 10 days while the State Police probe their lives for reasons why they should not have a firearm. Most states have instant background checks that take no more than a couple of minutes.

Now, a federal judge, Benson E. Legg, has blotted out as unconstitutional Maryland’s “good and substantial reason” requirement to obtain a permit to carry a concealed weapon. There are about 12,000 such permits in Maryland, issued to individuals who can prove that they engage in such activities as dangerous work or who transport large sums of cash. Maryland’s attorney general, Douglas Gansler, is seeking to delay the effect of the ruling beyond its implementation date of August 7 until a case can be heard. And he has appealed the lower court ruling to the Fourth Circuit Court of Appeals on the grounds that the ruling will impede law enforcement agencies from protecting the public.

The FBI estimates that there are about 200 million privately owned guns in America exclusive of those in the possession of the military, law enforcement agencies and museums. However, other estimates put the number at closer to 350 million—one for every man, woman and child in America—with the average gun owner possessing four guns each.

But Maryland has had a problem with gun trafficking from Virginia where there is easy and legal access to firearms at the state’s ubiquitous gun shows. Statistics from law enforcement agencies have shown that many guns that have been used in the commission of crimes in Maryland had been traced to Virginia. In fact, New York Mayor Michael Bloomberg, who is heading the 700-member “Mayors Against Illegal Guns” organization  for more controls on the purchase of guns, dispatched two of his plain-clothes policemen to Virginia to demonstrate how easy it is to purchase guns in that state. They returned to New York armed to the teeth.

“Non-licensed sellers… are not required to perform federal background checks, and as much as 40 percent of gun sales slip through this loophole,” Bloomberg has said in a written appeal for tighter gun laws.

New York’s Sullivan Act, the nation’s oldest and one of the toughest, gun control laws began in 1911 as a farce and a blatant form of patronage. Sponsored by Eddie Sullivan, a political hack and a loyal legman for Tammany Hall, the law was originally designed to reward Tammany’s friends and allies with gun permits and to deny licenses to its enemies and opponents. The permits were originally awarded by judges.

The New York (and TV crime show) sobriquet for a handgun, “roscoe,” was possibly derived from the name of Harvard scholar Roscoe Pound, who wrote extensively on the Second Amendment, especially favoring the arming of civil rights workers during the 1950s and 60s to facilitate “the second reconstruction.” Pound was no friend of the Constitution and argued that it should be ignored “so as not to impede beneficial expansion of government to restrict personal freedom.”

Legg’s ruling on the Maryland law came only three days after the massacre in Aurora, CO, where 12 people were killed and 70 wounded in a shooting spree during a midnight screening of the latest Batman film. James Holmes’ arsenal of three weapons included a Glock 9mm pistol, a shotgun and a Smith & Wesson assault rifle with an oversize 100-bullet magazine. Holmes also had an ammunition supply of 6000 rounds, the weapons and the bullets all legally purchased and owned. Luckily, the assault rifle is said to have jammed or the carnage and the body count probably would have been significantly worse. The federal ban on assault weapons expired in 2004.

A few days later, police raided the Crofton, MD, apartment of Neil Prescott and uncovered a suburban armory of 25 semi-automatic rifles and pistols along with several thousand rounds of ammunition in steel boxes that, he said, he intended to “blow up” the employer who was about to fire him. When police arrived, Prescott was wearing a T-shirt imprinted with the slogan, “Guns don’t kill people, I do.”

The NRA is a $200 million a year lobbying powerhouse funded mainly by gun manufacturers and four million dues-paying members. Elected officials at the national level have been strangely silent following the mass murders in Aurora whereas there is usually an outcry for stricter gun controls following such tragedies. The silence illustrates, once again, the power of the NRA and its human trumpet, Wayne La Pierre, and the stranglehold that it has over public officials. Only President Obama has spoken out, albeit cautiously, when, in a speech before the Urban League, he called for tougher background checks for gun buyers. The silence also indicates how combustible the gun issue is in an election year.

Opponents of even the most modest gun controls are mainly conspiracy paranoiacs on the right fringe of the Republican party who do most of the NRA’s bidding. Nothing gets their blood boiling like the United Nations. Only recently, for example, a group of GOP elected officials urged Obama and Secretary of State Hillary Clinton to block the proposed U.N. Arms Trade Treaty which would place controls on the international flow of arms.

“The U.S. must not accept an ATT that infringes on our constitutional rights, particularly the fundamental, individual right to keep and bear arms that is protected by the Second Amendment, as well as the right of personal self-defense on which the Second Amendment is based,” the letter said.

The ATT is an attempt to prevent huge caches of firearms from falling into the hands of despotic dictators and to curb the kind of genocide and ethnic cleansing that has occurred in Africa and in the Balkan nations and now Syria. It has nothing to do with America or the Second Amendment. The NRA’s LaPierre has repeatedly called the ATT treaty a “global gun grab.”

Proponents of concealed carry laws cite Virginia and Florida, which have self-defense laws, as examples of a decreasing murder rate and an increase in politeness as a result concealed carry laws. The theory is that nobody knows who’s carrying a gun so everyone’s more respectful of each other.

Baloney. Isn’t that where George Zimmerman blew away Trayvon Martin because he claims he felt threatened? Since Florida enacted its “stand your ground” law in 2005, shooting deaths in the state are up 200 percent, according to the Florida Department of Law Enforcement. All of which proves that an armed society is not necessarily a polite society. As the NRA likes to say, guns don’t kill, people do. Yes, but they do it with guns.