Letting our thumbs do the talking. 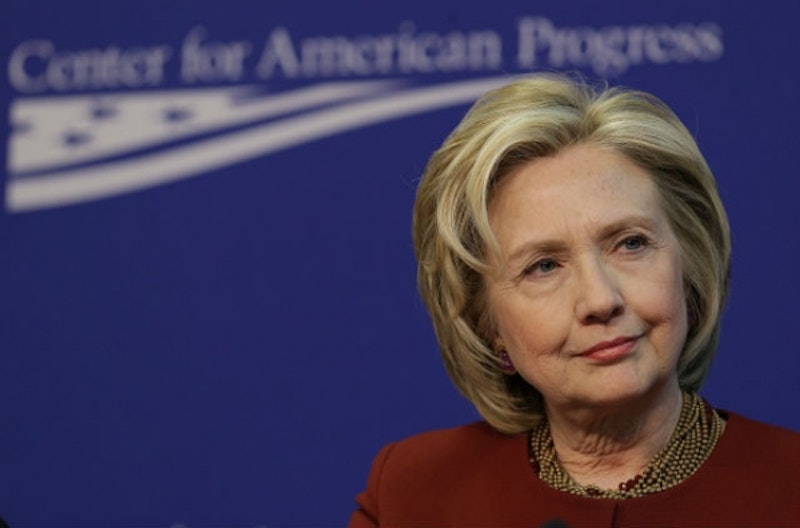 About 10 years ago, well before the 2008 elections, I began writing a comic novel about a woman candidate for president. More than 50,000 words into the project, I dead-ended, not so much because of a cop-out by what’s loosely described as writer’s block as by an intersection about where to take the plot. Then along came Hillary Clinton, and the idea lost its humorous, or satiric, appeal. Between then and now, and two new computers, two other books have ground their way through my desktop, one published, the other waiting for a suitor. The female epic is still molding.

By the time I figured a path out of the imagined maze, and after months (maybe years) of procrastination, Clinton was holding forth as secretary of state—in what seemed like a showcase for bright females in the same way that academia and corporate America used to mockingly sit credentialed black hires by the door. Clinton, of course, followed trailblazers Madeline Albright and Condoleezza Rice to state until, currently, John Kerry broke the chain. And still another version of my fictional candidate fluttered through my head that I realize will never reach the keyboard or the print shop. History is traveling faster than fiction.

And now, nearly a decade later, Clinton is once again invading my nightmares. The fictional female candidate, of course, was a perfect construct in a male’s midsummer night’s fantasy—all the parts fit just right, a great looker and a TV anchor to boot. And that was exactly the point to play off the caricature of feminists back then—hot-eyed bra-burners in crotch-high black socks who cry rape at the friendliest flirtatious wink. And that’s where Clinton creeps in, illustrating the velocity of history and how not only perceptions but also reality have altered our expectations and acceptances in just 10 headline-packed years. In a non-political but perfectly social progression, it follows, almost seamlessly, that a woman nominee was the next logical step after a black president.

There’s another irony to fiction vs. reality, too. My comic opera plot-line was based loosely on the Aristophanes anti-war comedy, Lysistrata, in which the titled character unites the women of ancient Greece in common cause to refuse to have sex until the men put down their weapons and stop going off to war. And yes, my leading lady was named Lisa Stratta. Her campaign slogan was, “Just say I have a headache” and her campaign plane was named “Aspirin 1.” She refused to accept PAC money and she would accept no contribution of more than $1—dubbed “gyne-dollars” in the book. Lisa Stratta was the candidate from C.H.A.S.T.E.

The underlying point of the writing was that men had so screwed up the country that it was about time for a woman to take charge and clean up the mess. And what better motive than denial? Here’s one of the up-front, scene-setting paragraphs: “Lisa Stratta was, well, mad, mad as hell. Mad at having to strut her stuff every night reading the news about runaway corruption in high places, about caffeinated contributors, about sexual hijinks and priapic misadventures, about vendible politicians, about non-existent weapons of mass destruction, about the company town of Washington, DC, whose only product was the company itself. Shorn of its monuments, and statues and buildings and pricey restaurants for seven-figure pin-stripers, Washington is no different from Detroit, Wilmington or any other one-product village. They manufacture cars and chemicals. Washington manufactures itself. The nation’s capital is the source of its own momentum.” If there’s a little of the Clintons tucked in there with George W. Bush, the compression was purely intentional. But the point not to miss is that is that while society and attitudes have changed dramatically, Washington hasn’t budged an inch.

And here’s where fact and fancy intersect. The opening line of my fictional riff on a presidential candidate is more valid today than it was a decade ago: “Lisa Stratta always wanted to be one of the boys. In the end, she outdid them by becoming the most important woman of her generation.” So there you have it, the durable conundrum—does life imitate art, or is the reverse?

It’s fascinating to flip back over a lifetime of columns and other jottings to contrast those period-piece impressions with the lives we live at an updated existential moment. A decade ago, women were still chained to desk assignments in the military. And gays were serving under Bill Clinton’s cold-shoulder code of “Don’t ask, don’t tell.” LBGT literally didn’t exist as a unifying force for recognition and equality. Lavatories were still stand-or-squat private business. Women hadn’t yet seen the glass ceiling, let alone attempted to shatter it. Equal pay and paid leave were still background noise. And Hillary Clinton was about to suffer a humiliating defeat by an upstart novice senator, in part because she was ridiculed as a “dynastic” candidate.

We’ve traveled far and fast. Back in campaign Hillary One, Citizens United hadn’t yet polluted the political system with dark, untraceable money. And just as significant, the economy hadn’t fallen over the edge to spotlight attention on the us vs. them class distinction that exists in America between the so-named one-percenters and the other 99 percent. Back then, Donald Trump, with his saffron soufflé of hair, was still a tease, but warming to politics with the “birther” issue. The “occupy” movement endures, in one form or another. Bernie Sanders has had a terrific run as an energizing, prickly pied piper. He convinced an entire new generation that while there may be no such a thing as a totally free lunch, there is certainly one that’s more economical and affordable.

Here’s another over-the-shoulder look at the era before Twitter and Facebook: “Yes, Lisa Stratta was mad. Mad about campaign funny money, hard and soft, mad about fungible androgens in both parties, Democrat and Republican, who stand on high horses instead of lofty principles. She was mad about the entropic weeping and wailing and woe-is-me-ing of America on the airwaves, the instant cacophony that parades as the music of democracy, the Agora of the airwaves, the talk-aholics anonymous squawking out 50,000 watts of bullfeathers. But most of all, Lisa Stratta was angry over war.” Fast forward: We no longer yell at each other. We let our thumbs do the talking.

Hillary Clinton is approaching the greatest resume upgrade since Cinderella. And not once this season has the word gender been dragged into the campaign by a rival of Clinton’s, let alone regarded as a condition for the presidency. (The late indirect reference—and it was not strictly a gender thing—was former Gov. Ed Rendell’s (D-PA) questioning of Sen. Elizabeth Warren’s (D-MA) fitness to be commander in-chief.) Feminism has been refined and redefined, if not yet equitably applied, for the quickest way to defuse a social grievance is to absorb it into the mainstream.

It was Clinton herself who tried to make gender an issue during the drawn-out primary season. But the repeated reference backfired and failed to gain ignition. She has resumed the gender issue to contrast with Trump’s misogynist put-downs of women, hoping it will energize the 51 percent of the electorate that women comprise to offset her expected losses among white male hoi polloi. But she’ll have to be more than a one-note candidate. Clinton will have to consider other issues as well. A woman candidate for president is no longer a novelty act.