With the help of Keegan-Michael Key. 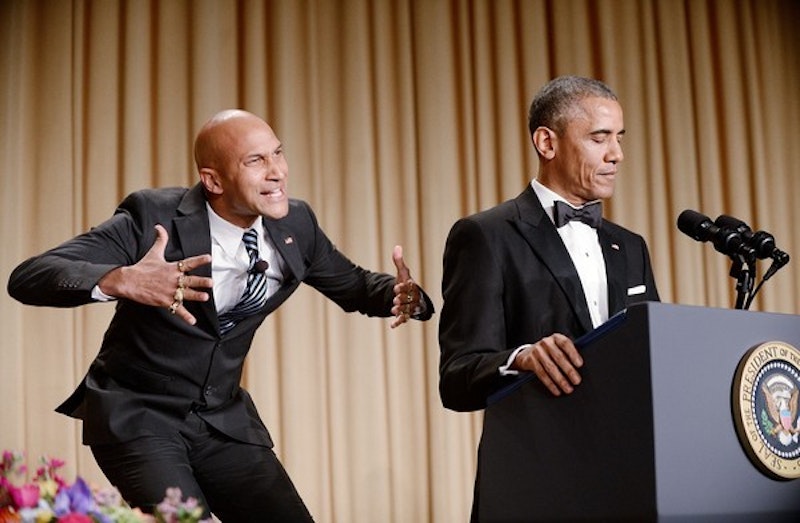 No, the President isn't going to shout on TV about black-people stuff, especially if he's black. The whites don't want to see that. And any president, if he's going to raise his voice, had better get “our children” in there, to show that his anger is righteous. Of course, that phrase goes with some issues better than others. If President Obama were center-right and had to do an “Anger Translator” sketch, he'd be shouting about our children and this crazy debt. But he's center-left, a bit, and what he shouts about is the climate.

Keegan-Michael Key hushes him, acting alarmed at how the President is getting out of hand. That particular gimmick is hokey, because Obama's anger wasn't anything so horrendous. He sounded angry and loud like anybody gets; he didn't sound off-the-hinges angry. Still, this is the first time I can remember Obama shouting. Accordingly, the moment does stand out.

The premise of Key's “Anger Translator” bit is that there's a lot Obama could say if he would just drop the politeness. On Key & Peele it's assumed that dropping politeness means going from white to black. There's Jordan Peele, droning his imitation of Barack Obama as Principal Skinner, and there's Keegan Key as Luther the Anger Translator, popping his eyes and flexing his knees, acting all jive. Same principle at the White House Correspondents’ Dinner. “Hold on to your lily-white butts!” shouts Key as he charges on stage. But when Angry President Obama finally gives voice, what comes out is tote-bagging. All right, I guess that makes sense.

Key is a gifted actor, but he's also a pro. His many skills include knowing what must be done to keep a sketch going. Luther doesn't work unless he shouts, usually high up in register—it's the “What you say?” rising squeal of ferocity that pop culture has pinned on ghetto youth since the 1970s. The character has to work that gear over and over, and at the dinner Key had to do it for a good-sized hall, not the TV camera. He pitched in and did it, and his voice never showed a crack. As always Key was full of good ideas. I liked the stylized way Luther fit fingertip to fingertip on his vest front, his own right-angled posture for indicating almost ceremonial dudgeon, and then advanced with elbows out and the whites of his eyes aglow. On the other hand, I've never found Luther funny. The sassy black man routine is a bit old, and I find his noise monotonous. Match that with the monotony of Obama in Skinner mode, and the mind repines. Given that the bit isn't so funny, I wonder about the eye whites and eye rolling and the up-and-down jivey squeals. We've got a black president, but the black man next to him carries on like somebody with white gloves.

As for the rest of the President's act, it was about the usual but with fewer laughs than before. The opening film clip bombed, and he had to get the audience back from joke to joke. They really liked the ones where he said his middle name was Hussein and that he was a pot-smoking socialist. He managed. As an orator Obama is a matter of peaks and valleys, and as an off-the-cuff explainer he ranges from pretty good to a bit regrettable. But as a stand-up comedian he is fine. He's better than fine. The usual Obama we see in public, the stooped man interspersing his words with snatches of simulated refrigerator humming, disappears. He's replaced by a droll fellow who presides over sentences that unfold just the way he wants them to. Because he doesn't have to be polite and circumspect, I guess. That clears a lot of ahs and ums out of the system.

David Axelrod says Obama once summoned Maureen Dowd to the front of the plane and laid into her. He didn't raise his voice, though. He did the job like the Piranha brothers: sarcasm, irony, litotes, the lot. No shouting, but I bet he didn't say um. When we hear angry Obama, if ever, he'll talk like that. He won't be Luther the angry black man, he'll be Barack the fed-up grad student. And he won't be talking about climate change, he'll be talking about the mysterious way that white legislators, party operatives and media hacks kept deciding that the country's first black president couldn't count on the same deference as all the other presidents. I bet it's going to be good; he's got some material.