No One Likes Paul Ryan

But it's not his fault. 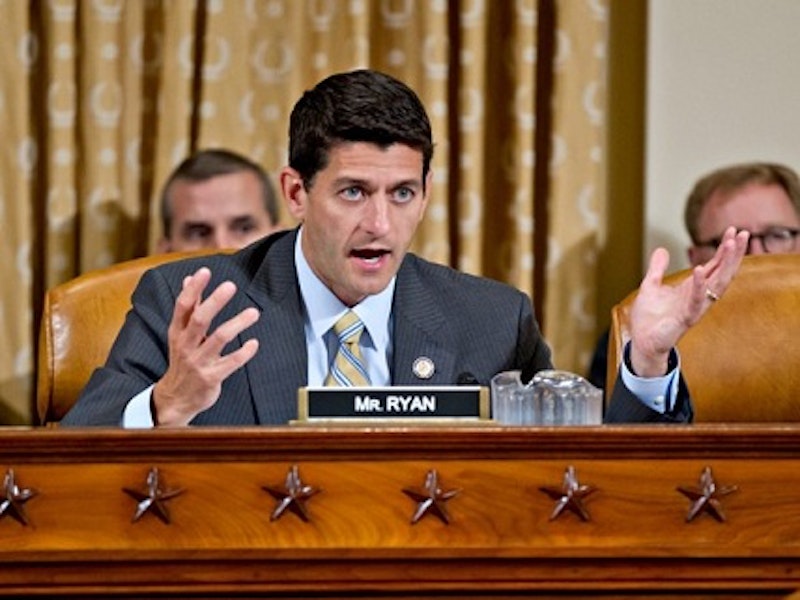 Paul Ryan is oddly unpopular for a vice-presidential candidate.  Statistician Nate Silver looked at early poll data showing Ryan with 38 percent favorability to 33 percent unfavorable, and declared those numbers "middling." In fact, Silver compared post-announcement favorability scores for all VP picks going back to 2000, and found that Ryan's were lower than any of them—yes, even worse than Sarah Palin's. Silver also looks at a USA Today/Gallup survey that asked voters what they thought of Romney's choice of vice-president. Thirty-nine percent were positive, 42 percent neutral or negative—again, slightly worse than the numbers for Palin, and only slightly better than those for the widely mocked Dan Quayle.

Personally, I think Ryan is a creepy, heartless ideologue, who cravenly panders to the wealthy and doesn't give a shit about anyone else. I believe he would be a disastrous president, who would massively increase inequality, sow poverty and hardship, and push the US to social and fiscal calamity. The only possible thing I can think of in his favor is that he is not Palin. Chew on that one.

But, I'm a liberal, and, as the lingo goes, a "high information voter." I knew I hated Ryan and his "Kiss-me-I-heart-Ayn-Rand" idiocy before he was tapped.

Surely, though, most people responding to polls have only a vague idea of who Ryan is. He's a hugely polarizing figure in the House… but most Americans barely know what the House is, much less what happens in it. For most voters, the news media's announcement of the VP pick was the first they'd heard or seen of Ryan—and the media simply is not that down on the guy. I mean, yes, liberal pundits don't like him, but nobody is suggesting that he is obviously and absurdly unqualified, as was the case with Palin or Quayle.

Which brings us to the question: why is he unpopular? When people say they don't like Ryan, on what are they basing that opinion? There are a couple of possibilities. First, the dislike of Ryan could be a function of the fact that the economy sucks and that, partially as a result, this Congress is unbelievably unpopular. Congress is in fact currently less popular than a Communist takeover of the United States. Congressman Paul Ryan is, by definition, in Congress. No wonder, then, that most people aren't thrilled with him.

There is another factor which may account for Ryan's poor showing, though. That would be Mitt Romney. Romney's favorability ratings were never all that great, and they've been further damaged by a slew of effective negative advertising by the Obama campaign. Recent polls show him with a 47 percent favorable to 48 percent unfavorable rating. As a challenger during a rotten economy, you'd think Romney would be able to generate some positive vibes simply by virtue of not having been in Washington. And perhaps he has… but those positive vibes are no match for the fact that he is personally repellant. People don't like the guy, and who can blame them?

What I'm arguing is that instead of Ryan giving Romney a boost, Romney is dragging Ryan down with him. In the eyes of the public, Ryan is just some random guy that Mitt Romney picked. They don't know anything about him except that Romney picked him, and that they dislike Romney. Naturally, they dislike Paul Ryan too.

If this is true, the good news for Romney is that he did not pick a uniquely unappealing vice president. The bad news is that he is, himself, uniquely unappealing. Before Ryan, the dynamic of the race was that people were unhappy with Obama's handling of the economy, but thought Romney was a lying, arrogant, privileged asshole who couldn't be trusted to fix things.  And after Ryan, that’s still where we're at.