Obama’s Made the U.S. Less Homophobic

Turns out prejudice can be a pretty easy habit to break. 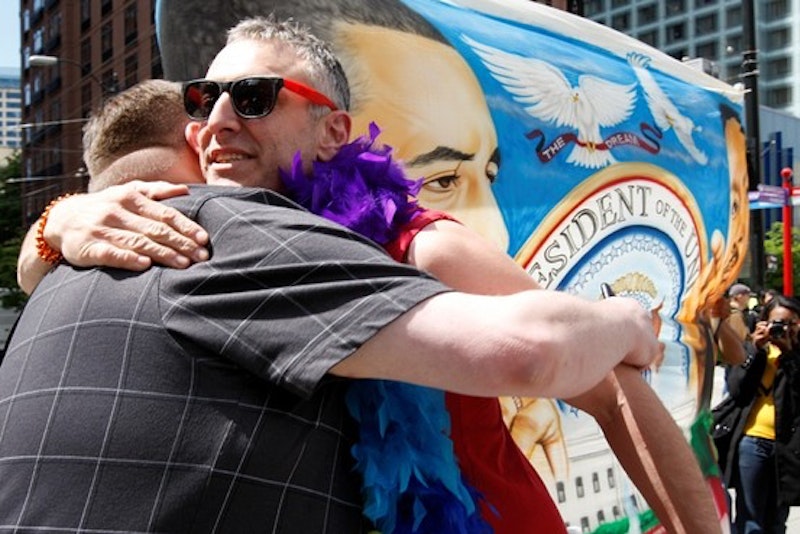 Surprising almost everyone, Barack Obama's endorsement of gay marriage appears to have had major consequences. Specifically, it has had a significant effect on public opinion, particularly among black voters. In Maryland, polling shows that the shift was a full 20 points, from 56 percent of black voters against gay marriage before the President's announcement to 55 percent in favor afterwards. As a result, it now seems very likely that the state will defeat its looming anti-same-sex ballot initiative.

As I said, this has caught lots of people flat-footed. Ta-Nehisi Coates, for example, admitted that he was "skeptical that Obama would actually influence black opinions," but now has had to reconsider. Adam Serwer similarly calls the change in the polling "almost incredible," and adds, "I'm generally very skeptical of the power of the bully pulpit, but I can't think of any other reason for this significant a shift" other than Obama's change in position.

Jonathan Bernstein, though, is less impressed. In a Washington Post column he argues that black voters’ haven’t really changed their opinions.  Instead, he says, most people don't really have definite opinions on most issues. Berstein:
"It’s not exactly that Obama influenced black opinions, would be my guess. It’s that African American voters who really don’t care very much one way or another about the marriage issue—but do consider themselves on Team Democrat—are now aware that marriage equality is the normal position of that team. Or, perhaps, that those who think of themselves (implicitly or explicitly) as Team Black now have a revised view of what that team’s position is. Or, perhaps, people who are on Team Church and Team Democrat now realize that those two are in conflict and they have to choose, while before they were getting only one signal. Remember, we’re only talking about one in five or so flipping in order to get these results; I don’t know for sure that they are among the least interested in the issue, but I’m guessing that’s the case.

The point is that none of these possibilities are really about anyone’s opinions, if by that we mean actually assessing the policy itself and changing what one believes. I suspect very few people have done that in the last two weeks. Mostly, what’s happening, if I’m right about this, is people who don’t care about the issue very much are just re-aligning themselves with where they believe their group belongs."

I think Bernstein's probably correct that the massive shift in polling came about because people didn't hold strong opinions about gay marriage one way or the other. But it's silly to argue that therefore they didn't have "opinions" about it, or to suggest that those "opinions" didn't change.

Bernstein seems to want to reserve the term "opinion" for some sort of purely reasoned position that relies on rigorous logic and a careful knowledge of the facts. But everybody's opinion, all of the time, is based on a whole range of factors, which might include careful reasoning, but no doubt also includes cultural identity, tribalism, self-identity, and random mood swings. Similarly, opinions can change for a whole host of reasons, trivial or important.

To which I say… how can you separate the two? Or to put it another way; it seems like a lot of people listened to Obama when he said gay marriage was okay, and they decided that, if the President said gay marriage was okay, then gay marriage is okay. It may be about group identity… but it's about a group identity that is based in no small part on morality. People identify as Democrat—they identify with the President—because in part they believe he will do the right thing.

Far from being a sign that the President didn't shift opinion, this is an explicit demonstration of why leadership actually matters. If a president endorses torture, suddenly a whole lot of people will believe—not just say they believe, but actually will believe—that torture is good and we should have more of it. And if a president says gay marriage is okay, then suddenly a whole lot of people will believe that gay marriage is okay. Because Obama decided to be less homophobic, our nation is less homophobic too.

I think there's a reluctance to credit the shift in the polling as reflecting actual change in part because we're talking here about prejudice. The assumption is that prejudice is a kind of bedrock ideology; that it's deep-seated, stubborn, and hard to alter. And no doubt prejudice is like that for some people about some things. But for many people in many cases, prejudice can be as lightly held as any other viewpoint—a habit rather than a hatred. But even if it's just a habit, changing it matters.