Maryland is no exception. 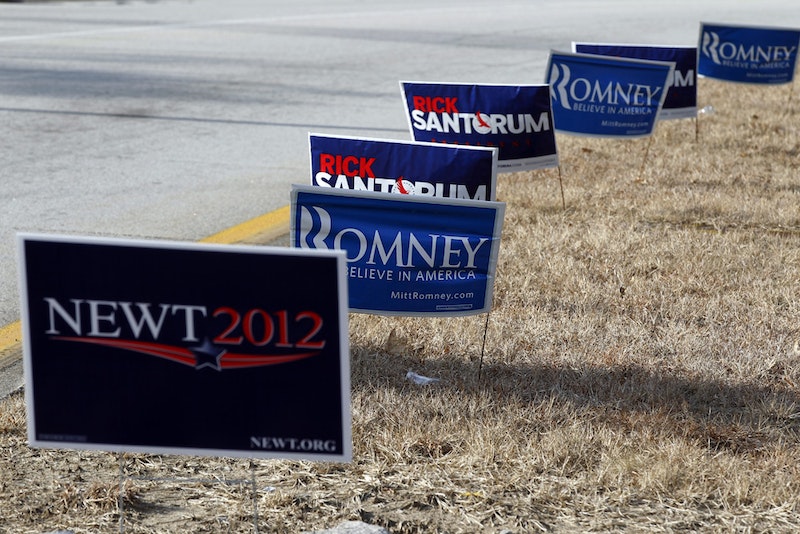 Democracy constantly swings between tyranny and anarchy. The thought is the property of the poet T. S. Eliot, but the problem belongs to the American confederation of states.

The 1950s are battling in some sanctimonious backwaters for revival and the accompanying repudiation of every social and civic advance since the alcohol-fueled rages of Joseph McCarthy and the benign presidency of Dwight D. Eisenhower.

In Florida, Republican Gov. Rick Scott is overseeing a purge of at least 180,000 voters suspected of not being citizens, including a 91-year-old veteran and a woman who was born in Akron, OH. In Michigan, under Republican Gov. Rick Snyder, four towns and one school district have been taken over by emergency mangers with unlimited powers that supersede the authority of elected officials. In Wisconsin, Gov. Scott Walker (R) faces a tough recall election, the second in American history of a sitting governor, over his union-busting and anti-worker policies. Maryland is moving slowly toward a plebiscite form of government because of an agitated Republican minority and a General Assembly that is reluctant to face the public over tough votes.

And while the Republican collective across the nation is moving aggressively to stifle Democratic voters and dismantle the Democratic coalition that has existed since the New Deal, a Democratic consultant in Maryland, Julius Henson, has been fined $1 million for attempting to suppress the black vote during the state’s 2010 gubernatorial election.

The Republican collaborative takes many inventive, sometimes subtle, forms of discouraging voting, most notably the restrictive new voter ID laws which directly affect the young, poor, elderly and minorities, demographic wedges of the electorate most likely to be aligned with the Democratic party. At their crudest, though, they lunge frontally at labor unions and collective bargaining rights to try and break up, if not dishearten, the very bedrock vote of the Democratic party since the 1930s and the Great Depression. The right to organize and to negotiate through collective bargaining can no longer be taken for granted in the 26 states under Republican dominance. Blacks were added to the Democratic palette with the signing of the Civil Rights Act in 1964 and the Voting Rights Act of 1965, both of which are currently under attack in the courts and in Republican state houses.

All Henson really did in Maryland, though willfully, was to authorize and send out 112,000 robocalls to voters in heavily black Prince George’s County and Baltimore City. He was sued by the state of Maryland in federal court and got a swift kick in his wallet pocket for attempting to discourage blacks from voting, although he claims the puzzling phone calls were “counter-intuitive.” Republican governors and legislatures are doing nothing less except under color of law. Their argument is a fear of widespread voter fraud when, in fact, study after study, by Justice Departments under Republican as well as Democratic presidents alike, have proven that the claim is false and voter fraud is virtually non-existent.

In the extreme case of Florida, for example, Scott’s claim of non-citizenship has been rebuked by local election board officials who contend that the selective purge is a wasteful and time-consuming chase of a bogeyman. Recall that in 2000, there were similar charges of hanging chads and ghost voters when George W. Bush won the state by 750 votes after a partial recount. Al Gore arguably would have won the state, and the presidency, if he had not gone to court and had allowed the recount to proceed. Instead, the election was decided by Republican appointees to the Supreme Court. Meantime, the Justice Department has ordered the state of Florida to halt it systematic attempt to purge voters because it violates federal law.

Michigan is another extreme case of dismantling Democratic constituencies by selective governance. The appointment of emergency managers has been a Michigan legal device since 1988 but only now, under a Republican governor, has its use accelerated to four cities and one school district. Under emergency managers, democracy, literally, is suspended. Emergency managers subsume local officials.

They can: Hire and fire local employees; renegotiate or terminate labor contracts; sell, lease or privatize local assets; revise contract obligations; change local budgets without legislative approval; and initiate local bankruptcy proceedings. It takes little imagination to understand why a Republican governor in Democratic Michigan fancies the device, especially in heavily minority towns and cities such as Flint, Pontiac and Detroit. A recall movement against Gov. Snyder is underway.

Walker’s situation in Wisconsin is well-known, and voters will decide on Tuesday whether he stays or goes. He launched a frontal assault on public sector unions—and the Democratic Party—by cancelling collective bargaining, cutting pensions and laying off employees. And he did it with the helping hand of those conservative sugar daddies, the billionaire Koch brothers, whose business empire benefits from the dismantling of the Democratic constituency and the elimination of regulations, especially on oil drilling and environmental restrictions. Labor unions spearheaded the recall drive, and now the last-minute betting is on the side with the best get-out-the-vote operation. (Maryland Gov. Martin O’Malley (D), chairman of the Democratic Governors’ Association, made two appearances in Wisconsin last week on behalf of the Democratic challenger, Milwaukee Mayor Tom Barrett.)

The strengths of a democracy are also its weaknesses. Maryland has relatively stringent rules about the use of government by petition. While it allows them, except on fiscal issues, state law prohibits voter initiatives whereby voters can initiate laws and send them directly to the ballot as, say, California does. The people elect representatives to the General Assembly to express their voices and vote their wishes. Nonetheless, a minority of Republicans, extremists and xenophobes, all of which in today’s hothouse environment may be redundant, have taken over the petition process to thwart the will of the majority and, in the case of the timid General Assembly, to hide behind constitutional amendments in the guise of allowing the people to decide. Simply put, they don’t have the cajones to decide for the people as they were elected to do.

The former is the case with the “Dream Act” and same-sex marriage and the latter is the once-and-future issue of legalized gambling, issues that will crowd the November ballot and provide a collision of crosscurrents in the presidential election. The Dream Act referendum was a computer generated petition drive organized by Del. Neil Parrott (R-Frederick) and cheer-led by the madcap voice of Del. Pat McDonough (R-Harford), whose fear of foreigners is outweighed only by his phobic reluctance of traveling to downtown Baltimore. The shorthand version is that the law would allow American-born children of illegal immigrants who’ve graduated from public schools to pay in-state tuition at public colleges and universities and only if their parents pay taxes and are on the path to citizenship.

The gay marriage petition was accomplished more by leg-work than push-button electronic Democracy. The petition on same-sex marriage was a collective effort driven mainly by the Roman Catholic Church, along with other denominations, which, in a rarity, encouraged the name-gathering in its churches and on its properties following Sunday masses. The Maryland Marriage Alliance submitted nearly 123,000 names when only 55,736 are necessary for the issue to appear on the ballot.

The largest number of signatures, by jurisdiction, originated in Baltimore County, host to the largest Catholic Parish, St. Joseph’s, in the Baltimore Archdiocese, with 30,000 families. Parrott, the computer geek, also participated significantly in gathering signatures against same-sex marriage. The ballot issue is certain to place Maryland in the thick of a national debate in an election year when Republicans have aroused their evangelical base with a litany of social issues—gay marriage, abortion, contraception. But wait just a minute! A federal appeals court has declared the Defense of Marriage Act, the conservative bulwark against same-sex marriage, unconstitutional because it discriminates against married gay couples, further rippling the issue in Maryland.

Another provisional entry on Maryland’s November ballot is the Congressional redistricting plan drawn and adopted by the state’s Democratic leaders and principal mapmakers. The plan scrunches Republican Rep. Roscoe Bartlett into a newly configured Sixth District with a Democratic majority that could cost the GOP the seat. The petition drive is once again being front-ended by Parrott, who has developed an online program for gathering signatures. If the drive succeeds, voters will have the choice of accepting or rejecting the new map in a complicated roundelay that could wind up having the courts redraw the congressional districts.

Finally, because they ducked the issue of expanding gambling in 2007 directly and sent it to the voters for ratification to avoid the flack, the General Assembly must, once again, turn to the voters for approval if a study commission recommends a sixth casino and a special session is called. Once a decision is made by constitutional amendment it can only by changed by the voters on referendum, convenient for reluctant legislators but a cumbersome and uncertain method of governance by redress.

All politics are local, the late Tip O’Neill observed, and that’s exactly what’s occurring now because of a lack of leadership and partisan paralysis at the federal level. The states sense that nature abhors a vacuum just as they reject federal inaction. Advocacy groups and activists are increasingly turning to the courts to reconcile the two just as they sought judicial relief during the tumultuous 1960s. When Congress and state legislatures fail to perform, the courts will do their jobs for them. So stop bellyaching. Democracy in action is an ugly job but somebody has to do it.