The Center Is Won On The Margins

Are we ready for a third major party? 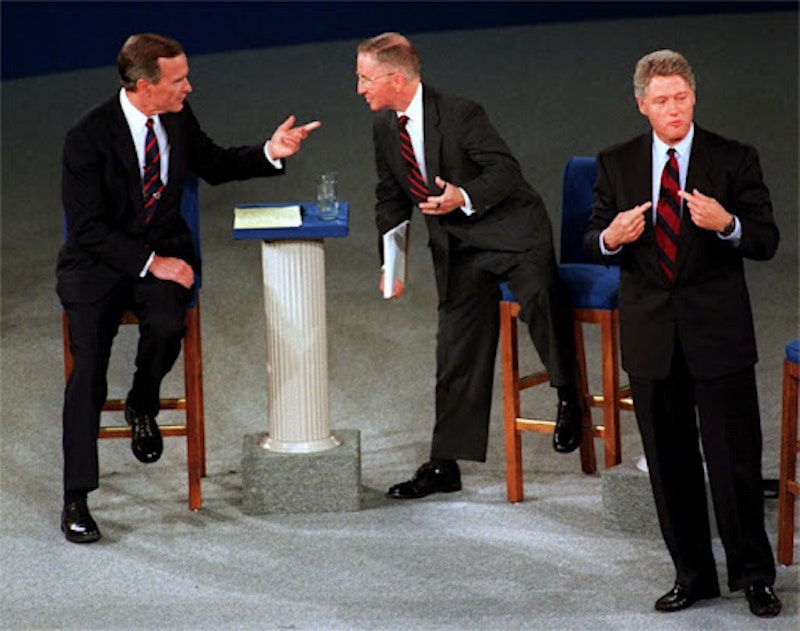 Another attempt to create a viable Third Party Solution hit the pavement, this time in the form of Americans Elect and the approximately $30 million it dropped on the effort. Doomed from the start, it represented the half-formed hopes and dreams of any number of pundits, independents and moderates who, despite their on-one-hand punditry, independence, and moderation, already know who they’re going to vote for and are looking simply for a way to get work done in a time where nothing gets done.
Americans Elect looked to the center when, unfortunately, the day’s political battles are fought at the margins—where “get out the vote” is premised on the amount of faux umbrage one side can muster. The center might be how elections are won and lost (at least, how senators, governors and presidents are chosen), but the center is ultimately moved at the margins. Scare enough people, and your have yourselves the center.

Of course, the people behind this assuredly brilliant political hit job quickly denounced it once it went public. We’re not racists, no, we’re just asking questions, to take a line from Glenn Beck. We would never make the election about this. Right. And the Tea Party is a bunch of serious Constitutional scholars who are serious about curtailing government spending and deficits even if that means cutting Social Security and Medicare (i.e. socialized medicine for old people), the military, and pork barrel projects back home.

The center is won on the margins, through get-out-the-vote operations and negative ad blitzes. Voter fraud is a classic right-wing tale of “we’re not dog-whistling racists, we just think there’s a ton of black people voting that shouldn’t be voting.” There’s no third party waiting to be born between that and the left wing’s constant trope of “Republicans are going to take away every check you receive and give it to rich people.”

Well, there is a third party waiting to born somewhere, but the US government isn’t a parliamentary one. There are no coalitions, no Vast & Grand Compromises. There’s no third party to be found in a binary political system that goes back to the Civil War and beyond. I’m not surprised Americans Elect crashed and burned. I’m cynical about any sort of effort in the sort of climate we’re in, yet can’t imagine any other climate that would prove better. My cynicism isn’t rooted in “this isn’t the right time,” it’s rooted in “this isn’t the right country.”

The electorate isn’t serious enough for a real third party alternative. Both parties are pretty adept at subsuming any fringe upstarts. What percentage of Occupy Wall Street protesters wouldn’t vote for a Democratic president? What percentage of Tea Partiers wouldn’t vote for a Republican President? Maybe a few would stay home out of principle, or maybe a few actually could buck the trends that are spoon-fed to them by the elites and the money. I doubt it.

No, we’re not going to see a third party alternative when retiring Sen. Olympia Snowe (R-ME) was considered, at one point, a frontrunner for the Americans Elect nomination. William Jennings Bryan/Barry Goldwater/Ross Perot she ain’t.

An ugly general election is forming, and Mitt Romney and Obama will attempt to keep their chins above the water as their Super PACs and negative ad campaigns rage on and on. There may be a few chunks of actual independents out there who are waiting to be persuaded one way or the other, and they may provide a half percentage point or two in the final tally. The presidency will be won and lost at the margins: for Obama, it’s getting the votes of people who don’t normally vote; for Romney, it’s getting the votes of people who are waiting to be scared in just the right way.