It was a brief, and glorious, demonstration of solidarity in the wake of 9/11. 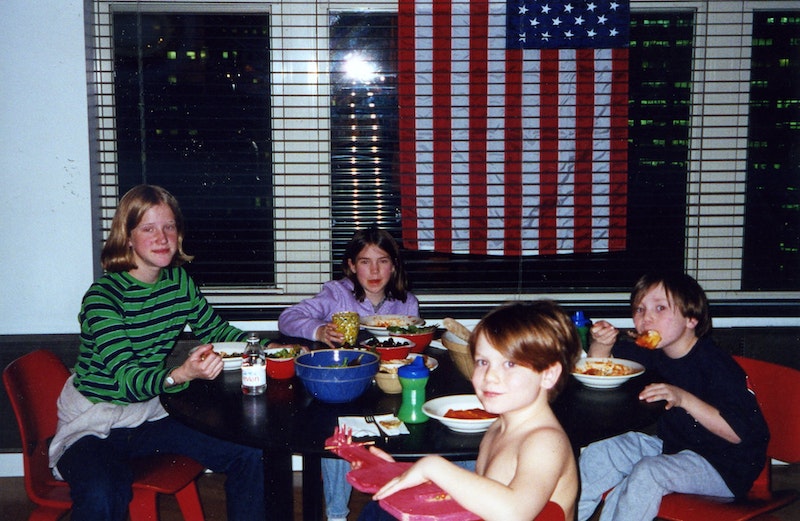 Twelve-year anniversaries of historic events don’t get much play in the media, especially today when the country’s collective memory is like Swiss cheese. Nonetheless, I think it’s worth recalling, and reflecting upon, the horror of 9/11, and not just because—despite the cliché—the United States really did enter a more unforgiving and brutal era in the aftermath of the atrocity visited upon New York and Washington, D.C. Most Americans, especially in the Northeast, over the age of 18, have a fixed spot in their consciousness about that day 12 years ago, echoing previous generations’ instant snapshot of Pearl Harbor or John F. Kennedy’s assassination.

I lived in Lower Manhattan with my family in 2001, in a Tribeca loft just blocks away from the World Trade Center (brief digression: it still appalls me how long it took for Ground Zero to become something more than an open sore, a disgraceful mess of bureaucratic squabbling that besmirched the memories of those who perished), and like most residents below Canal St. was quickly evacuated from our building. It was fortunate that my oldest brother had plenty of space in his uptown apartment to house us for the week before returning to our devastated neighborhood, where the National Guard was on duty and you had to show identification to walk down to the corner bodega. The hucksters who sold ice cream and bottles of water, at grossly inflated prices to rubberneckers and tourists who treated Ground Zero like an amusement park—I don’t include those who had deeply personal reasons to get close to the site—and the four-month stench of what amounted to a crematorium stick in mind to this day, as do the conversations I had with one of my cousins, an FDNY veteran who labored at the WTC for weeks on end and stopped counting the funerals he attended when the number passed 75.

But a happier memory amidst the horror was the instantaneous reaction of New Yorkers to buy American flags and hang them on their buildings or apartment windows. I’d never seen such an outburst of patriotism in my life, and in New York City! A few months after 9/11 one of my brothers flew into the city from his home in London and from the air he could see the blur of red, white and blue, and like me, it just blew him away. I don’t know how manufacturers of flags—not a burgeoning business on 9/10 one would assume—kept up with the demand, but they were everywhere. Cabbies, especially immigrants of Mideastern descent pasted pro-American decals on the windows of their cars, probably more out of self-protection than anything else. And there were limited, and disgusting, reprisals against men and women whose swarthy looks and accents made them targets for creeps seeking street revenge. I won’t soon forget an altercation a couple of days after 9/11, when, walking home from my New York Press office to our temporary lodgings, I saw a bunch of white teenagers trash a newsstand operated by an turban-wearing Indian, leaving the fellow weeping and dazed by his bad luck.

Upon returning to our loft, my wife purchased a large American flag (pictured above) that we hung in our 12th floor window that faced Hudson St. In fact, we kept it there until moving to Baltimore nearly two years later. Growing up, my parents didn’t fly Old Glory outside our Huntington home, although in the basement there was a folded flag, an older number probably from World War II that still had 48 stars. Maybe it was irrational, but the flag gave us comfort, as did the flag pins my sons wore on the lapels of their school blazers.

I don’t suspect much will happen tomorrow—perhaps Rudy Giuliani will be escorted from whatever cave he’s currently holed up in, and Donald Trump might make a statement, one that the media, who lazily can’t get enough of the blowhard, will highlight on their blogs; made for BuzzFeed. President Obama will undoubtedly issue a few anodyne remarks, then perhaps call for a moment of silence. And that’s about it.

Besides, Obama, the most feckless foreign-policy president this country has seen since Jimmy Carter—and he’s worse than the meddlesome and pious ex-president—has his cluttered mind occupied by the current crisis in Syria. Not that his dithering really evokes a sense of crisis: Obama had a window several weeks ago to act militarily against Assad, but decided to punt the issue to Congress, providing him political cover, which is what he probably wanted all along. And now we have the half-baked Russian proposal that Syria forfeit its chemical weapons to international control, whatever that means, aside from buying Assad more time to plot against the dissidents in his fractious country.

The Wall Street Journal’s invaluable Bret Stephens, in a Sept. 10 op-ed, “The Bed Obama and Kerry Made,” spelled out the disastrous scenario with his usual articulate reasoning. Whatever your opinion is about George W. Bush—and I was in favor of the Iraq invasion, as was Congress in overwhelming votes—at least he projected foreign policy conviction. Obama appears he’d rather be watching the tube. Oh, and let’s not forget that almost no New Yorker on 9/12/01 believed that 12 years on the city wouldn’t be attacked again.

Say what you will about the prospect of a U.S. strike on Syria, it has already performed one useful service: exposing the low dishonesty, the partisan opportunism, the intellectual flabbiness, the two-bit histrionics and the dumb hysteria that was the standard Democratic attack on the Bush administration’s diplomatic handling of the war in Iraq… All Americans are reduced when [Secretary of State John] Kerry, attempting to distinguish an attack on Syria with the war in Iraq, described the former as ‘unbelievably small.’ Does the secretary propose to stigmatize the use of chemical weapons by bombarding Bashar Assad, evil tyrant, with popcorn?

I’ve no idea how this immense Syria conundrum will play out, and I suspect most Americans, if they’re paying attention, don't either. So for now, I’ll think about a short period in the United States when cities and towns were enveloped by American flags and a conviction that the country would fight terrorism.