Complete with “Give Peace a Chance” poster and matching t-shirt. 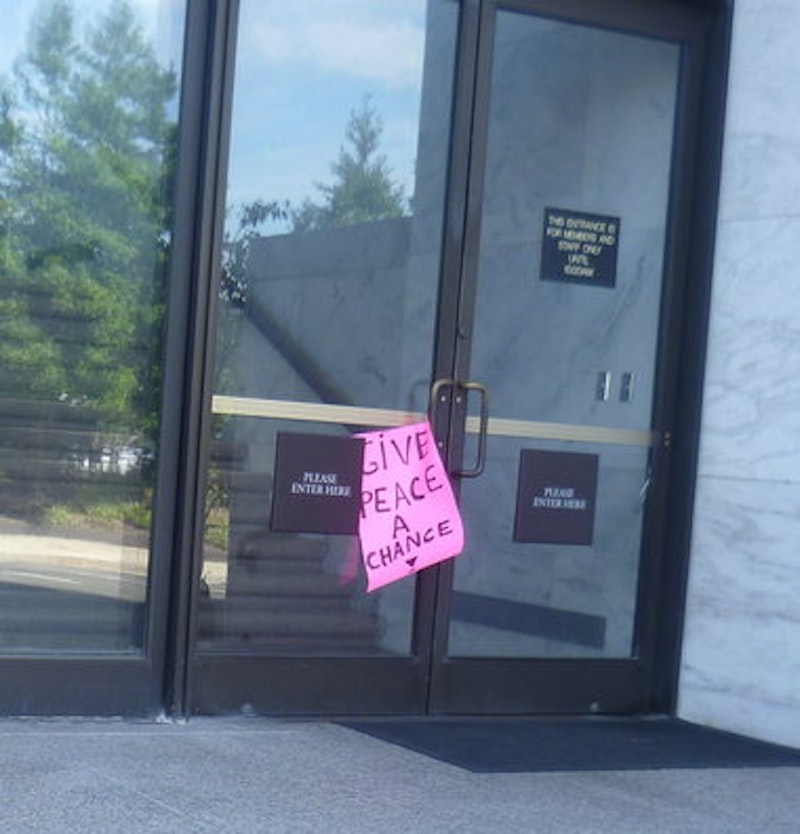 I finally convinced my friend Martha to metro into DC for the planned protest in front of the White House last Saturday. She brought one piece each of florescent pink and yellow poster board. I chose the pink, because I was sporting a pink t-shirt and even in protest a girl wants to look good and be color coordinated just in case a TV crew is close by. I wrote in fat magic marker letters “Give Peace A Chance!”

We were late and I knew we wouldn’t reach the metro in time to hit the noon protest. After exiting the train, we raced to the White House, which was a hot mile-and-a-half hike. Once there, we realized the people gathered were just tourists, taking pictures and mulling around. One woman of foreign descent was sitting on a chair, with “No to Syria” signs placed around her. We inquired, “Where is the protest?” In broken English, she pointed and said something about a Senate building. By that time the afternoon heat had sunk in, my water bottle was now only half full and I was totally disappointed.

We were off in search of the Senate buildings. Martha was trying to GPS on her phone. It wasn’t working. We walked in circles and I felt like I was in an urban Blair Witch Project. My water bottle was empty, my backpack felt heavier and I was tired of carrying a poster that was useless.

Ultimately, we found our destination. Not a soul in sight. No protestors, no tourists, no traffic. It was a ghost town. By that time, the spunk had gone out of me. I wanted to walk to the nearest café and have a cold drink or head to the National Gallery of Art and sit on their divans soaking in a calming Flemish oil painting.

We walked past the Dirksen Building, the Russell Building, and it was in front of the Hart Senate Building that I had my meltdown. I was emotionally drained and physically spent. I took my pink poster and propped it on the handle of the door. It was the least I could do. I took a picture and immediately heard Martha say, “Oh, shit.” In the blink of an eye, a Capitol Police car had pulled up, its red light flashing. Where did it come from? How did it see me? Was I on camera?

The very young officer got out of his car, pointed to the poster and told me to go get it. He then asked for I.D. Martha was asked to walk to the end of the block as if we were going to gang up on the kid who was young enough to be our son. He asked if I had any warrants out on me. I was nervous but that did make me chuckle. My record is clean. He said, “I don’t believe you,” and called in my pertinent info. After discovering no rap sheet, he still wouldn’t give up the fight. He interrogated me over and over about Code Pink, which I found out was a grassroots peace movement that had been causing a bit of a brouhaha the last several days. He wanted to know how I was involved with the organization. Why did I have a pink poster? Why the pink t-shirt? Had I taken part in the protest? Was I lying?  I said, “Officer, my friend Martha bought two pieces of poster board at Rite Aid today. I just happened to pick the pink one since I like to look fashionably coordinated. I have no ties with any organizations and to tell you the truth, I haven’t seen a protester all day.” He instructed me to dispose of the poster in the trash and said he wouldn’t arrest me this time. As if I was going to come back to DC the next day and try again. Around that time, an older, more seasoned officer came strolling by. He overheard some of the harassment I was receiving and said with authority, “Why don’t you just move on and enjoy your day?”

I signaled for Martha to join me. We walked away in a daze, not believing what had just transpired. We rounded the corner near the Capitol and saw a group of around 20 people on a street corner surrounded by police. Martha met a man who was a local reporter. He said this was what was left of a protest that involved more than 1000 people. Martha told him our story and he wrote it all down. I asked one of the cops where the nearest metro was and couldn’t wait to head home. The day was, I suppose, a victory of sorts. Despite not being anywhere near a protest, I almost got arrested, I was interviewed for a newspaper and I left my “Give Peace A Chance” pink poster face up on a bench at the metro station.