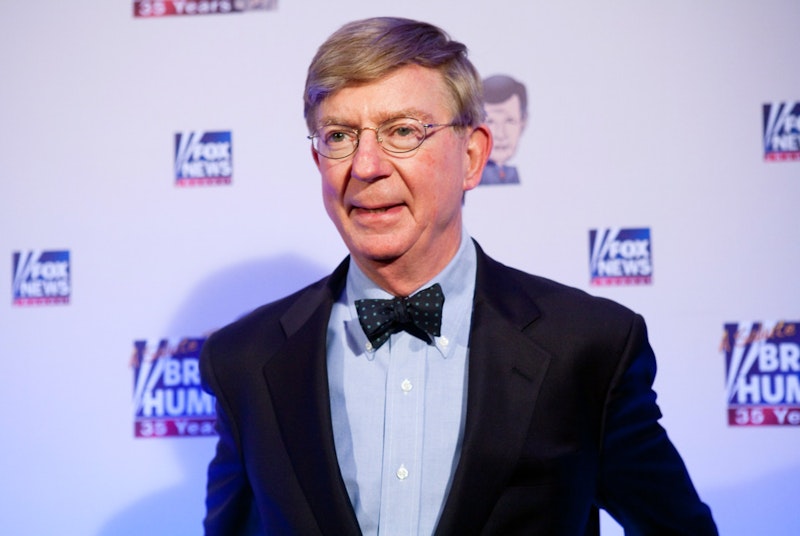 Well, George Will hasn’t been fired yet.

It’s a victory of sorts that The Washington Post hasn’t acquiesced to the mob rule of The National Organization of Women and UltraViolet that it drop Will from its op-ed pages over his “hateful” June 7 column about sexual assault that claimed progressivism has swallowed academia and given victims “a coveted status that confers privileges.” Apparently Twitter campaigns are of little interest to Post editorial page editor Fred Hiatt, who sensibly told the left-wing Media Matters that he “welcomed the discussion [Will’s column] sparked” and urged dissenters to “join the debate… without mischaracterizing the original column.”

Another sensible view is that Will, now 73, and stumbling on fumes, should’ve been let go by the Post at least several years ago, not for his opinions but rather because he’s a repetitious, sniffy bore. I don’t read Will regularly—in fact, maybe half a dozen times a year—and one would guess that his audience is shrinking even faster than The New York Times’ David Brooks. Was the column in question a cavalier treatment of the reality of unreported rapes and thuggish on-campus behavior? Sure, and some of Will’s opinions are what you’d expect from this priggish man who was an undergraduate at Trinity College in the early 1960s, when fraternities ruled, parietals enforced and men were required to wear a coat and tie at dinner. It’s probably a subject that Will would’ve been better off leaving to younger colleagues—oh wait, the Post doesn’t have op-ed columnists under the age of 45—and stuck to the Chicago Cubs (you know he’s angling for Bud Selig’s Baseball Commissioner job) or yet another foreign policy essay that, per usual, is studded with quotes from Horace, Pericles, Jefferson or whomever his intern dug up for that particular day.

That’s not to say Will, who’s discovered “trigger warnings,” didn’t have a nugget or two that were on the money. He wrote: “It is salutary that academia, with its adversarial stance toward limited government and cultural common sense, is making itself ludicrous. Academia is learning that its attempt to create victim-free campuses by making everyone hypersensitive, even delusional, about victimizations—brings increasing supervision by the regulatory state that progressivism celebrates… Which serves them right.”

And I’d guess that Will was toasting himself for finally writing a column that got his adversaries so worked up. The man can still get it up! (Hmm, was that a sexist remark I just made? It’s hard to tell these days.) Nevertheless, whether or not you found Will’s views hurtful or offensive, that’s not the issue: imagine what a can of worms would open up if NOW’s hysterical call for Will’s firing was successful. In today’s twisted media world, such a result can’t be ruled out.

I’ve little patience with scads of pundits and would be delighted if their employers showed them the door. Paul Krugman, obviously, but also Charles Blow, Gail Collins, Eugene Robinson, David Frum, Michael Tomasky, Ruth Marcus, Hanna Rosin, Bill O’Reilly, the entire roster of Salon, Karl Rove (I still think it’s weird The Wall Street Journal allows the prodigious fund-raiser and GOP consultant a weekly slot), the Huffington Post pilferers and Jonathan Chait. And a clean sweep of every TV personality (with the exception of Today’s Willie Geist and the goofy Matt Lauer) would be a welcome development.

But armchair petitions demanding a firing? How lazy. If NOW’s president Terry O’Neill was so incensed by Will’s opinion, it would’ve been refreshing if she led an old-fashioned on-site picketing campaign in front of the Post’s headquarters in Washington, D.C.