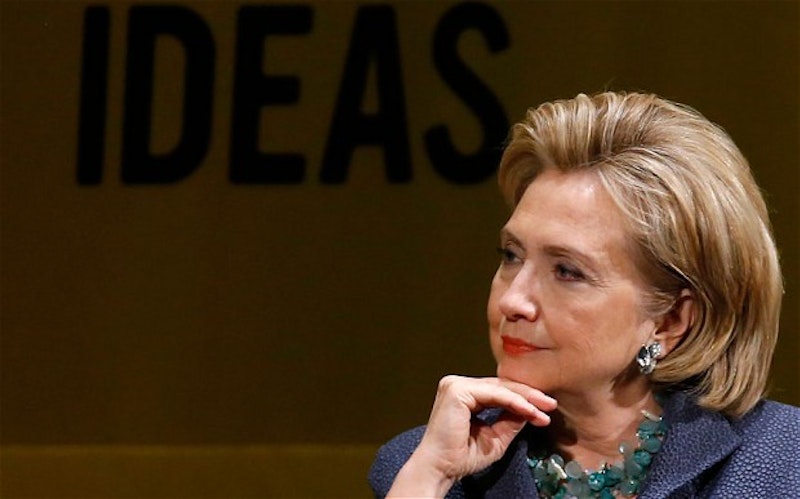 I don't particularly like Hillary Clinton. While she was First Lady, her husband cheerfully passed discriminatory legislation against gay people, cut welfare benefits to show that Democrats could exploit racism too, and dismantled the financial regulatory structure that had been in place since the Great Depression, setting us up for our current never-ending economic doldrums. As a senator, Clinton supported the Iraq War, the biggest foreign policy disaster of the last several decades. She did a decent enough job as Secretary of State, but remains way too hawkish for my tastes, and I have no faith in either her good will or judgment.

Therefore, I’ve concluded that Clinton's decision to name the Bible as her favorite book means that she cannot possibly win the Democratic nomination.

That reasoning makes no sense you say? I would agree. And yet, here is Damon Linker seriously suggesting that Clinton's pallid answers on her book tour are going to interfere with her ability to get elected. Linker worries that "informed listeners" were not convinced when Clinton claimed that her switch to supporting gay marriage had nothing to do with politics. He’s also worried that somebody or other is going to be put off by Clinton's claim in The New York Times Book Review that she plans to reread the Brothers Karamazov this summer. Clinton, Linker concludes, is lying. And these little lies may have dangerous consequences.

He writes: "I might not be a devoted Democrat, but I am a passionate anti-Republican. Until the GOP's furiously (albeit selectively) anti-government base comes to its collective senses, the party needs to be kept away from the White House. And given the astonishingly lopsided support Hillary has enjoyed so far in the 2016 race, she may be not just the best hope of ensuring that the Republicans remain exiled from the presidency, but the only one."

Clinton being less than truthful with softball interviewers makes Linker worry that she’ll fumble big, important questions too… and then, it's GOP apocalypse and the end of us all.

Which is ridiculous. Because you know who pays attention to these little gaffes, or, for that matter, large, painful, embarrassing gaffes? Pretty much nobody.

Mitt Romney was as plastic a presidential candidate that’s ever been created in the android factory. He changed his mind on every consequential issue, starting with abortion and going on up to basing a large part of his national campaign on running against the health care program he pioneered. He clumsily insulted 47 percent of the electorate because he was just that stupid and hateful. If the electorate could be alienated by inauthentic candidates spouting moronic crap, then Romney was the man to alienate them.

But the electorate wasn't alienated. Almost every major analyst said before the election that the economic fundamentals indicated a close but comfortable win for Barack Obama.

And after the polls, Barack Obama won by a close but comfortable margin. Romney's plasticity and his major league gaffes—none of it mattered. Because most people just aren’t paying attention.

Now, maybe Clinton could say something incredibly stupid and alienate her financial backers or her supporters within the party. But Clinton's been around a long time now; most of the skeletons in her closet, not to mention her insincerity, are well known. People know what they're getting. No party actors are going to drop Clinton because she flubbed a question on “Fresh Air.” She hasn't damaged her primary chances. She hasn't damaged her election chances. Suggesting that she has in any way done either is not analysis; it's ridiculous ignorant burbling.

Linker ends his piece with the ominous warning that "There's only so much of this transparent nonsense that sophisticated American voters will accept. Or forgive." It's a doubly amusing conclusion. The idea that there’s some sort of plurality, or even significant minority, of "sophisticated American voters" is ludicrous. The vast majority of Americans don't know where Ukraine is. People in general are focused on their own lives; they don't pay attention to the news. They vote for their party's candidate (which is a perfectly reasonable voting strategy) and that's the extent of their sophistication.

But what's most funny about Linker's argument is that he's unwittingly revealing that, at least as far as this article goes, he's not a sophisticated American voter either. He has only the dimmest idea of how people make voting choices. He doesn't know how candidates are chosen in primaries, or what factors actually affect national elections.  He's spouting nonsense. Luckily for him, though, not enough people are paying attention for it to matter.