We must exorcize the ghost of the Obama years and seek the lessons buried in the legacy of the Roosevelts and LBJ. 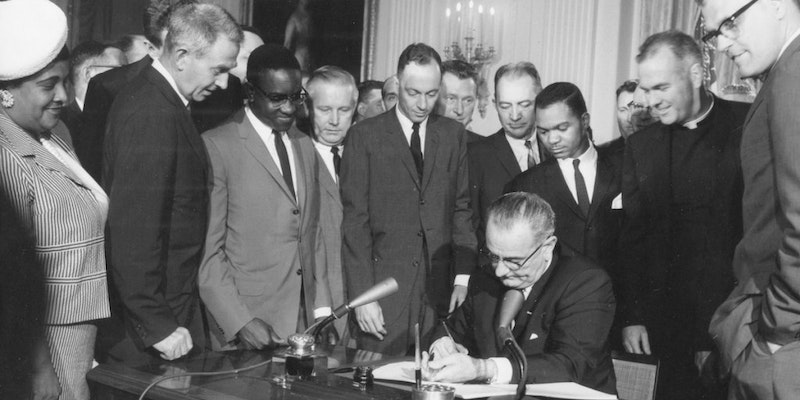 In our petty political age, the popular imagination has a fundamentally distorted view of the desirable politician. The perfect politician, in the minds of engaged suburban voters, resembles the “nice boy” who ran for student council president. Look at him in his little suit and tie, isn’t he adorable? You remember that guy. Really nice, everyone liked him. He remembered your name and had a great smile. But you also remember how ineffective he was. He was essentially a figurehead that represented the “values” of the school, but with no requisite payoff for the students. Too bad he usually won.

I remember a high school friend who struck out against the cult of nice in his stump speech: “Listen everyone, last year, we elected “very nice people” who did nothing. Don’t make that mistake twice.” He had some panache. I voted for him twice; but he lost both times. His attitude was too much for people: too taciturn and egoistic. He’d go on to become an Occupy devotee and a leftist academic.

The worst candidate I remember was a self-righteous, finger-waving moralist who castigated the crowd for cheering on his opponent, who happened to be a “class clown” that year. He condemned those who’d turn such a respectable institution like the student council into a “popularity contest.” Eventually, we all started laughing at him, and he got flustered: He was toast.

As for the “clown” who ran against him, he went on stage and told really awkward jokes. His primary selling point was his high rating on Hot-or-Not.com. But he paired his silliness with a grain of actual ambition: to reform the student honor code. Charisma, humor and an initiative the faculty and administration might actually go for? He won.

Some of the teachers weren’t happy. Why would students elect someone who makes a mockery of the student council? Perhaps that was the point. Deep down, all kids know that student council is essentially play-acting subservience meant to condition students into pliable subjects who mindlessly carry that subservience into adult politics. And this guy knew that, but had a sense of humor about it. He was in on the joke with you, and because of that, he was positioned to get you something in return.

This gives you four political archetypes: the teacher’s pet, the ideologue, the moralist, and the ambitious fool. No individual perfectly embodies these personas, as they tend to overlap depending on the person’s style. The teacher’s pet politicians may boast a clean image aided by sweeping oratory, but don’t deliver much worth cheering about. They tell you that the power of moral idealism can “affect change,” but are really just taking the logic of branding and influencer culture taken to its logical, hollow conclusion. The obvious example here is Barack Obama, who “inspired a nation” but gave us a corporatist healthcare bill, failed to protect millions from home foreclosures, and engaged in a harsh crackdown on whistleblowers.

But electing outright ideological fanatics and activists won’t do us any good either. In his brilliant book, The True Believer, Eric Hoffer wrote, “The fanatic is perpetually incomplete and insecure. He cannot generate self-assurance out of his individual resources—out of his rejected self—but finds it only by clinging passionately to whatever support he happens to embrace.” While their “blind devotion and religiosity” may seem useful for recruitment and “engagement,” it comes at a price. This makes hardline ideologues difficult and implacable within any practical political project. Moreover, fanatics can’t be trusted, as “he finds no difficulty in swinging suddenly and wildly from one holy cause to another. He cannot be convinced but only converted.”

As for moralists, Machiavelli was correct in observing “the gulf between how one should live and how one does live,” and that “a man who wants to act virtuously in every way necessarily comes to grief among so many who are not virtuous.” To live in denial of this is to place hypocrisy at your center. You may pretend not to have a “shadow” in the Jungian conception, but suppressing the shadow causes a tension that will consume you. This is the psychology of the back-stabbing snitch, the murderous tyrant and the witch burner.

The most effective politicians are those who love politics, love the system, and love the prestige of their office. And the best know when to incorporate ideological fervor, righteous indignation, and a decent speechwriter into the mix. They’re in on the joke elite interests play on us, but they find ways to make the act suit them and work for you.

Some might think: “Is he talking about Trump?” No. It’s one thing to be in on a joke, it’s another to be a joke. One of the reasons Trump was so hated by political elites is because he plainly projected their real selves: narcissistic, selfish and obnoxious. But he embodied this truth to a fault, and needlessly antagonized many of the people who could’ve made his presidency unstoppable.

Consider the Roman Emperor Julian, sometimes called “Julian the Heretic” for his attempts to bring the Empire back to paganism during his short reign in the 360s. As the historian John Julius Norwich writes in A Short History of Byzantium, Julian was gifted in terms of “his intelligence, his education and culture, his energy and industry, his courage and leadership, his integrity and incorruptibility.” However, his reign ended in failure because “He wasted his time and energy on a hopelessly quixotic attempt to revive an ill-defined and moribund religion” and antagonized his subjects with “his puritanism and his ceaseless sermonizing.”

Aspiring politicians and their voters should understand politics as one of my history professors described it: a series of patron-client relationships. He described how even in a feudal system, the relationship exists, and cuts both ways. The lord is the patron of his serfs, providing them with land and protection. But the serfs are also patrons of the lord, providing him with the fruits of their labor, without which his title wouldn’t mean very much.

You have something I need: security and resources to live within a functioning society. I have something you need: the vote that grants you political legitimacy. Not all clients are equal in the eyes of their patrons. There are interest groups, factions of the elite, entrenched institutions, corruption, and a variety of other complicating factors: “the swamp.”

But the goal isn’t to “drain the swamp”; this is a fool’s errand. It’s to be the swamp and bend its creatures to your will, which should include giving your clients what they want. Focus-grouped teacher’s pets are vapid and politically impotent, and are helplessly shaped by their environment. Ideologues and fanatics are too unstable to see anything through and, as Plekhanov said of the anarchists, wind up as tools for reinforcing the status quo. And moralists will only get so far until getting caught in a bathroom going, well, even further.

Unfortunately, today’s political environment hasn’t recovered from the delusions of the Obama-era, and is hampered by the diffusion of power into civil-society institutions. We’re conditioned to recoil at the idea of cynical, backroom-dealing “machine politicians.” We have it totally backwards.

Machine politicians, who relished political realities, have driven some of the best legislation that’s benefited the widest number of Americans. We must exorcize the ghost of the Obama years and seek the lessons buried in the legacy of the Roosevelts and Lyndon Johnson.