Nobody Wants to Be a Cop Anymore 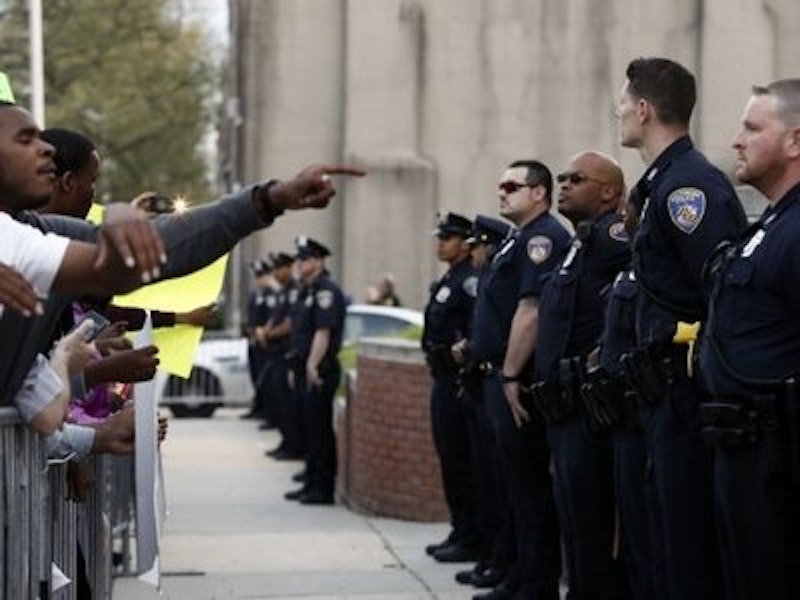 Policing, or peacekeeping, is dangerous work and in serious disrepute. Any day on the job can mean a bullet in the head or a job-ending rebuke in the personnel file or in the extreme a costly and damaging legal defense. Entire police departments, from one-squad-car towns in the South to militia-style forces in big cities, are caught between the shifting demands of “Black Lives Matter” protesters on the streets to the stern discipline enforcers in the Justice Department’s Civil Rights division. America is in an anti-cop mood.

Across the spreadsheet, the lack of interest in police work is revealing itself in statistics as well as questions about public safety. As the number of cops drops, the crime rate goes up. In Baltimore, a city of 622,000 and the scene of riots last year and extended police trials following the death of Freddie Gray, the number of cops dropped 6.1 percent last year and the homicide rate soared to 63 percent 344, the highest in decades. The city ended 2015 with 2634 sworn officers, down from 2805 the previous year, according to a report by Reuters. And this year so far, the police force is down another 6.8 percent to 2445 cops, and due to budget cuts the department will be allowed to expand only to 2629 positions—if suitable recruits can be found to fill the slots. Yet according to a Washington Post chart, Baltimore is second only to Washington, DC, among nine major cities for the number of cops on the street—47 for every 10,000 citizens. D.C. has 61 for every 10,000 residents.

The visible shortage is nationwide, in part to blame on the cops themselves for their often inexplicable conduct as agents of the government who are knowingly armed and dangerous and occasionally downright abusive with their authority. There is no justification for shooting an unarmed citizen in the back. In Las Vegas, for example, a dramatic spike in crime has been blamed on a shortage of police (as well as an influx of ex-cons from California.) Homicides are up 73 percent and overall violent crime is up 22 percent as the original sin city’s police department has lost 500 positions. Put another way, Las Vegas has 1.7 cops for every 1000 residents while the national average is 2.18 per 1000. The city of San Jose, California, is another extreme example. It has declared a state of emergency so that it can override the police association contract and re-deploy officers to street duty. San Jose has only 10 cops on the street for every 10,000 people. Cities and towns across Michigan are scrambling to beef up their police forces and are considering asking the state legislature for funds to sweeten the attraction. A website called “U.S. Police Link” dramatizes the case: It lists an alarming bulletin—“Police desperately needed in 10 U.S. locations.” One estimate has it that applications to police academies are down 50 percent nationwide. In short, the competition for cops is a national race.

Trying to achieve balance between adequate law enforcement and protection of civil liberties is the never-ending swing between tyranny and anarchy. Here are the numbers behind the numbers that show why being a cop has lost is appeal. So far this year, 616 Americans have been killed by police, according to a running tally by The Washington Post. According to the same set of statistics, blacks are shot by cops at a rate of 2.5 times greater than whites. In most cases, fatal shootings involving police are ruled justifiable homicide. But in a reverse demonstration of lethal gunplay, 20 cops have been killed so far in 2016, most memorably the five in Dallas and the three in Baton Rouge in retaliation for the police shootings of blacks. The FBI reported that 27 cops had been killed in 2015. (In the trials of five officers indicted in the death of Freddie Gray while in police custody, one ended in a hung jury, two were found not guilty and all remaining charges were dropped by the Baltimore state’s attorney.)

But let’s not romanticize cops. Police departments are para-military organizations, and among their members are many bullies with badges who seem to have learned their codes of conduct from Dirty Harry movies. Much of the antagonism against police departments, especially those in cities with large black populations, is a reaction to tough police practices of two decades or more ago. That is especially true in Baltimore where Martin O’Malley, a former prosecutor, was elected mayor and governed for two terms (1999-2007) as a “zero tolerance” gangbuster. Yet O’Malley is being implicitly bum-rapped in the Justice Department review of the Baltimore Police Department for the black community’s hostility toward police, much of the blame being out of historical context. What seems like a bad policy now was considered trailblazing police procedure back then.

Zero tolerance, or arrests for even the pettiest of offenses, was considered the enlightened policing policy of its day. It was developed by New York Police Commissioner Bill Bratton and exported to other cities, notably Baltimore, with two highly compensated consultants and the enforcer that O’Malley would name police commissioner, Ed Norris. Zero Tolerance had rescued and resuscitated New York from crime and grit and O’Malley was convinced it would do the same for Baltimore. (New York City paid out more than $500 million to settle police brutality claims during Rudolph Giuliani’s “zero tolerance” reign as mayor, according to The New York Times.) And surely worth noting, the administration of President Bill Clinton funded zero tolerance with millions of federal dollars which helped to expand the police presence in Baltimore and elsewhere across the country. It was the hey-day of modern policing, and with it came “Compstat,” the crime-mapping strategy that guided police to troubled areas of the city.

Norris and his janissaries, pushed on by O’Malley, drag-netted street corners and alleys, arresting young and old for anti-social actions such as loitering or spitting on the sidewalk. Most objectionable was the “stop and frisk” policy that even police complained to their union was being overused. Few spent time in prison. Even fewer ever went to trial. But the victims, nonetheless, were charged and branded with criminal records as well as a paper trail that would follow through life. The crime rate dropped dramatically during O’Malley’s two terms, by 48 percent, but it’s difficult to explain exactly why, according to criminology studies of the era.

During the Freddie Gray riots, O’Malley, then a candidate for president, lent his presence to the smudged neighborhood of Pennsylvania and North Aves. to try and help restore calm. Instead, rightly or wrongly, he was the target of insults, threats and blame by young blacks for introducing the police policies that helped contribute to the conditions that led to the violence and destruction.

But yesterday’s policing is today’s guilt trip. In place of zero tolerance, the Pentagon is arming police departments with surplus war-zone equipment and Baltimore is being surveilled surreptitiously—until a recent Bloomberg Businessweek expose—by a wide-angle lens in the sky that can gulp 32 square miles of the city in one shutter click. The spy-in-the-sky experiment is being funded through a grant from Texas billionaires John and Laura Arnold and filtered, in part, through the Baltimore Community Foundation, whose board, incidentally, includes O’Malley’s former chief of-staff, Mathew D. Gallagher, and Former Mayor Kurt Schmoke. The secrecy of the aerial trial-run is one more reason in the case of distrust against police.

The cop on the beat, if there is any longer such a thing as a beat, is no longer the familiar policeman casually swinging a baton who mediated neighborhood, even family, disputes. Today they are likely to be heavily recruited out-of-towners who prowl cities in a kind of underground war against denizens who are better armed than they are. And that’s one more reason why nobody wants to be a cop anymore.