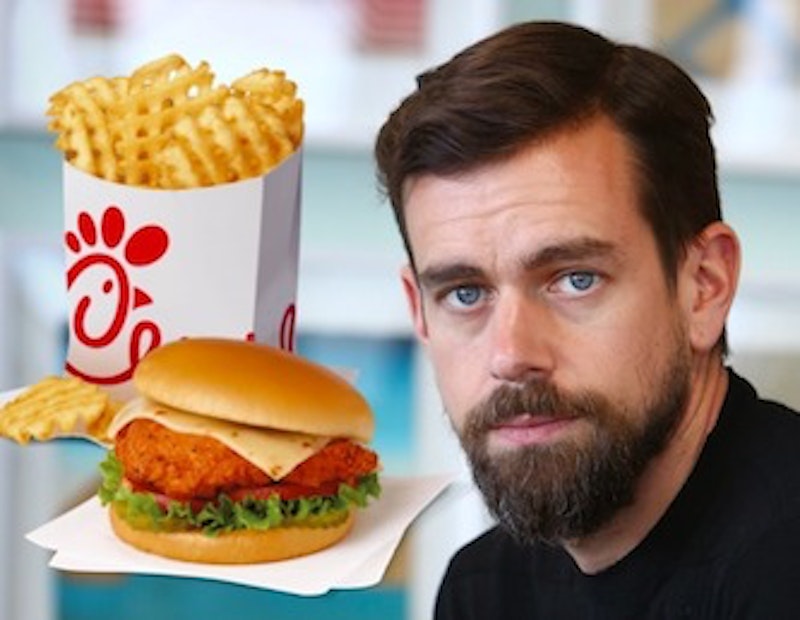 Twitter CEO Jack Dorsey let his guard down last week and Soledad O'Brien, anchor of her own nationally syndicated weekly Hearst Television political show, promptly shamed him into apologizing. Dorsey made the mistake of tweeting about purchasing lunch at liberal no-go zone Chick-fil-A during Pride month, which could only mean that he was implicitly endorsing the pro-traditional marriage remarks the fried chicken chain’s CEO, Dan T. Cathy, made in 2012. It couldn't mean that Dorsey still remembered Chick-fil-A donating food in 2016 to those waiting in line to give blood to the victims of the Pulse nightclub shooting in Orlando.

Dorsey silences various opposing political views, often covertly, on his social media platform, so on one level it was satisfying that O'Brien smashed him with her militant thought policing. More importantly, however, this petty smackdown is symptomatic of a malaise the Democrats need to work on.

I told a hardcore Trump-hater that I might now give Chick-fil-A a try for the first time, and that perhaps the TV host should cool her call-out culture instincts because it turns off all but the zealots when you do things like telling people where they can’t eat in the month of June. Disagreeing, he responded that politics is too reactionary now, and that people shouldn't do things to spite others.

But what people “shouldn’t” do isn't what people will do. My friend’s attitude sums up the Democrats’ current weak-minded approach to politics. Their habitual talk about how people “should” behave holds a key to how they’ve have been knocked so far back on their heels. Strategic thinkers don't concern themselves with normative claims like how people should behave, but rather how they'll behave. They live in the real world where wishful thinking is meaningless and there are elections that need to be won, not a fantasy one where what “ought to be” drives decision-making.

Making the obvious choice of scaling back the scolding would require a feel for strategy, but modern Democrats are feelings-driven. Chastising others makes them feel good and gives them the sense of superiority they crave. Their worst nightmare is now in the White House, partially because the constantly chastised decided they'd answer back at the voting booth, but it may take a second Trump term to get that crucial point across.

CNN host Brooke Baldwin, irate because not one woman was on the new Forbes list of the 100 highest paid athletes in the world, took to the airwaves on June 13 to demand wage parity for female athletes. She mentioned two “bad-ass” women, Danica Patrick and Maria Sharapova, as among the conspicuously absent, but offered no fixes, choosing instead to imply that it was all the patriarchy’s nefarious doing.

Should the male race car drivers give Danica Patrick a head start, out of fairness, so she can win more races and make the Forbes list? Maria Sharapova, currently ranked number 23 in the world, could increase her earnings by not failing drug tests and winning more matches, and yes, female tennis players generally earn less than men, but that's because more people want to watch the men play tennis, unfair as that may be. Perhaps these misguided tennis fans just need to be subjected to some unconscious bias training.

It’d be depressing to learn how many Democrats watched Brooke Baldwin's embarrassing “analysis” of the gender pay gap in the sports world and nodded along to her nonsense. That the enforced diversity they love doesn't exist in a pure meritocracy like professional sports disturbs and confuses them. It's just not how it should be.

Colin Kaepernick's take-a-knee NFL protests were doomed from the beginning because they were strategically unsound. Involving the flag predictably muddied his message. The Democrats reacted just as predictably. Instead of realizing that when Trump waded in it was time for a strategic retreat and a new strategy, they dug in and focused on all the angry conservative football fans suppressing the players' free speech. How could anyone possibly get upset over a football player refusing to stand for the national anthem? They should behave differently!

Robert De Niro getting lionized for saying “fuck Trump” from the podium of the recent Tony awards is instructive. Devising a new strategy is too stressful because it might require painful self-examination and actual effort. Just lash out against your tormentor instead of saying something thoughtful and inspiring (or maybe even nothing at all so people can enjoy a couple of Trumpless hours) because the world isn't how it should be with Trump in office and the best way to return it to normalcy is to scream as loud as you can until you wake up one morning and he's magically no longer there.