News on the Right: Who Showed at CPAC's Cheeseball Opera

Wingers hear from a choirboy, a tenor, two duds and a bust. 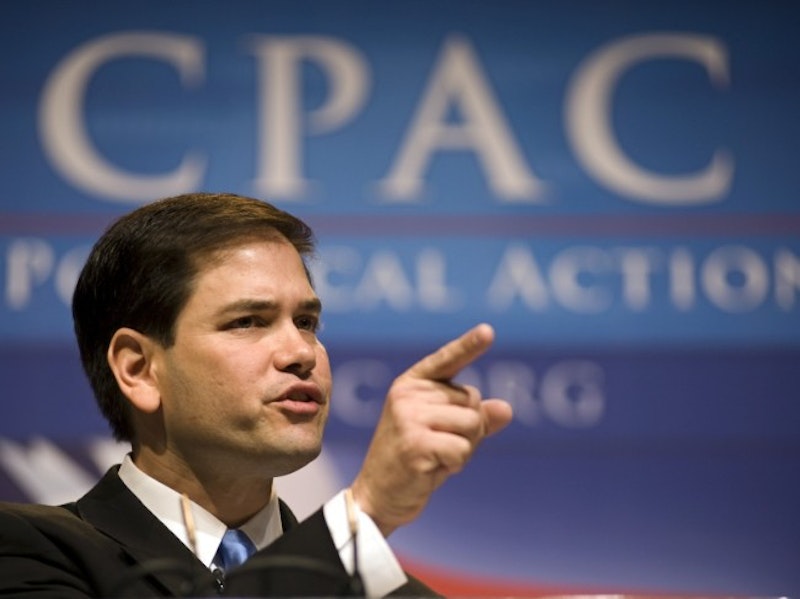 I made it through a batch of clips from this year's Conservative Political Action Conference. Except for the slavery fracas at the outreach panel, all were of big-name politicians giving speeches. Rand Paul, Sarah Palin and Ted Cruz (who introduced Palin) had the most oomph. They're the desperadoes, of course. The more establishment types, the fellows thought to have shot at the White House, ranged from decent to horribly charged with anti-oomph.

Oomph by itself doesn't add up to a career, as Sarah Palin has demonstrated. But there's something painfully eerie about a politician who auditions for president and doesn't realize that, in doing so, he's subjecting helpless people to 20 minutes of concentrated nothing. I mean Jeb Bush, but Bobby Jindal sucked too. Paul Ryan was good but didn't get as big a response as the Paul-Palin-Cruz trio of out-and-out fringers. Marco Rubio came off as a likable young man willing to talk earnestly and quickly until we had all realized how good America is. He wasn't painful, but you wondered why you were supposed to take him seriously.

At heart, Rubio's a choirboy. The big problem with his water gulp during the State of the Union response wasn't that he took it, but that he never broke eye contact. Rubio couldn't just take his moment and drink, he had to keep pleasing us. There's nothing all that pleasant about being eyeballed while somebody drinks, but Rubio's brain wasn't operating on that level. It had broken down and reverted to rudimentary functioning. In Rubio's case that means following a rule no matter what; he's scared not to. So his eyes stayed glued to the camera while he chugged.

At CPAC he pulled no blunders of that sort, but who cares? He's still a choirboy.

I'd say the response he got from the crowd was polite or a little better, but that's it.

Ryan croons again. Paul Ryan is far more of a performer. When he spoke, the audience sounded like it was happy to be there, though quietly happy. (National Review Online describes the Ryan crowd as “raucous,” but whatever.) His tenor voice, reedy but flexible, performed its winsome twists and turns. He sailed through his speech, a big-picture treatment in nicely turned prose: “the duty of government isn’t to displace these communities, but to support them. It isn’t to blunt their differences or to flatten their character, or to mash them together into some dull conformity. It’s to secure our individual rights,” etc. On the whole, Ryan did fine.

But he did a lot better last summer, on the big night when he gave his first speech as running mate to Mitt Romney. That was a corker, and it was followed by the ticket's defeat, which included the loss of Wisconsin (Ryan's home state) and Janesville (his hometown). By the time the race was done, people knew that Ryan had lied about a marathon and that his budget relied on the same Medicare reductions that he and Romney campaigned against. They also knew that his big speech had been torn apart by fact checkers. Now Ryan's latest quasi-budget faces a middling reception from people who used to love him, namely the Washington press corps. Ryan has superior gifts as a salesman. But after he gave his great pitch, he wound up worse off. Given that result, what are his talents good for? There's a cloud for you.

Personally, I was bowled over by Ryan's performance at the convention last August. I figured that Paul Ryan—Romney's man, tribal chief of the House Republicans, superb vocalizer of the dream—would be the party's agreed-upon nominee-in-waiting for the next election. He isn't. Rubio got the State of the Union response, and Rand Paul won the poll at CPAC with Rubio in second. Meanwhile, Ryan is gauging how damaged his goods might be. I bet he has a future, but he ain't no heir apparent.

Bobby Jindal eventually stops talking. Jindal exposure does to your soul what alcohol does to your brain: you die at the edges. Watch him give a speech and reality inverts. Dullness and flatness pop out at you, the man himself recedes far back, and what gets past the podium is just a sense of… jeez, this is it. This. Just this. This little man telling his jokes as the silence grows.

Jindal is taken seriously for the White House only because the Republican Party is now so low in its iron count. Reagan-era Democrats had Jimmy Carter and Michael Dukakis; the GOP in the age of Obama has Bobby Jindal. To be French about it, maybe there's a law of history that an enfeebled regime will make itself a self-portrait in the form of a candidate, and that the sight of this candidate will be debilitating to ordinary people, non-adherents of the ingrown, faltering old order. So we have Carter, Dukakis, Jindal held up as leaders. It's a grotesque sight—those burdened little peanuts pretending to full humanity.

They didn't fix the sound for Jeb. Not until the last third or so. All that time Jeb Bush sounded like he was confiding something to the podium. The world seemed to have come down to him, the two slim-pen microphones, and a blank echo that lurked between Jeb and the wall. The echo grew until it became thunderous. Then it died away. Then it came back, smaller now but accompanied by a steady buzz. All the while occasional muttering and scattered laughter could be heard, but from a distance, as if a room in another dimension had wound up abutting Jeb's pocket universe.

There you have the first 14 minutes or so of a 19-minutes speech. When the team got the mess straightened out, you could hear Jeb but the effect was still somehow off-kilter. Design-wise, he doesn't go with clear sound. He looks like a brick of cream cheese that is swallowing a human. He talks like a second-rank executive at a big company, a lifer who might give a speech at the retreat but before the big names came on. This is the party's grand old man, its Hillary? He's a leftover. Once he was a 50ish, semi-young governor with a chin; now he's one of the blobs found around golf courses and boardrooms. Hillary kept busy; what the hell has he done?

I'll note that the audience sounds didn't pick up all that much once the microphones were fixed. This was not a primed bunch of people. “Let's close the bar off so everybody in the back can stop chattering,” Jeb said at the start. “That's the best introduction I got in a long while, I wish you'd all heard it.” With that last one he sounded like an assistant dean at a minor college.

The anatomical Sarah Palin. During her CPAC talk, the ex-governor made a show of drinking out of one of the big soda cups New York City wants to ban. She also made a lot of jokes, including one about Christmas, Todd and presents. It's cute: “He got the rifle and I got the rack.” Four years ago there were people who thought Mrs. Mouth could be president; they got angry if you disagreed. Now here we are.

About the joke. Let's grant that almost everybody curses or talks dirty, including politicians. But, except for Palin, I have never seen a politician, or alleged politician, do the following: 1) talk in public about some particular person's genitalia and/or secondary sexual characteristics; 2) invite people to admire the body parts in question and/or imagine them in use; 3) make the possessors of the body parts be the politician and a loved one.

Palin cleared the first hurdle with her Facebook post last year saying President Obama ought to “grow” a “big stick.” Now she has galloped on. She's a few barriers away from sticking her hand to the side of her head and wagging her chest. She'll be like the hack comedian in Annie Hall telling his joke about the French Canadian sex bomb: “But 'oney, what about… dese?” You'll see it at CPAC.