Roger Ailes Is a No-Neck Asshole

Vanity Fair gives us a look at a how a jerk likes to see himself. 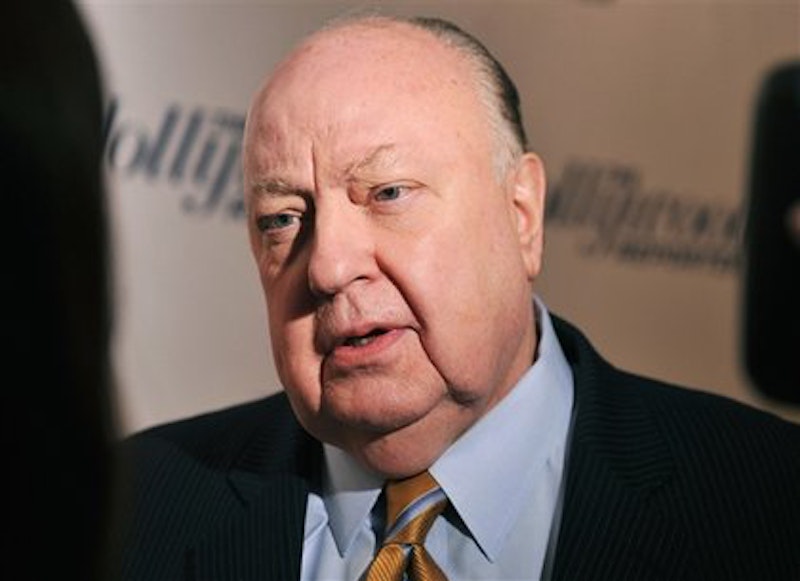 If you're talking anatomically, all assholes are no-neck. But if you're talking about personality and character, “no-neck asshole” is actually a useful term. It describes bouncers who don't wash after using the urinal, and it describes Roger Ailes, the man in charge of Fox News.

We know this from what Ailes chose to tell Zev Chafets, the journalist following him around for an approved biography. Vanity Fair recently ran an excerpt from the book, and as a result we have the Ailes side of what happened when his nephew broke some strangers' car window with a baseball.

The car was parked in a parking lot, so presumably it wasn't in the way of the game. The baseball got there anyway, and somehow the owners of the car found themselves on the receiving end of a blast out of Ailes' mouth. “It was a 10-minute incident that I turned into an hour,” he says. “Hell, it’s lucky they didn’t recognize me. It could have turned into a goddamn international scandal.”

Ailes allows that at some point he said sorry. But mainly he enjoyed himself. How? By yelling, it appears. Here's his commentary on the episode: “I do have a hair trigger, but I only use it on things that don’t matter these days. I just do it to blow off steam, create some bullshit.”

A point about the couple. Chafets says they “were Koreans who didn't speak much English.” And the parking lot was a church parking lot. The couple had been going to church, it appears, when they heard their car window break.

Ailes made fun of them for being religious. “Fine,” he said. “Then let’s pray over the fucking window.” This is his account of things. He thinks he comes out well. He is a showman and because the book is an approved biography, it's guaranteed to be the view that Ailes wants the world to take of him.

Looking at the self-portrait, I'd say Ailes was a man who's right about many small things (“There’s a problem with the damn framing. And when the guy leans forward, he blocks the guest”), but who doesn't have a clue about right and wrong or politics and economics. Ailes has his beliefs, and basically they're a Wide and Husky Man's fit. He'll believe anything—the boundaries of probability get kicked way back—as long as his ego finds it comfortable.

My guess is Ailes has the same frame of mind as the Fox viewer, the big man with a sofa and a remote control. Millions of them sit there and he's the one running about making sure they get what they want. As a result he's rich, so you've got to admire his drive. But still… what a slug.

Church-going immigrants who are working jobs and own some small property (such as a car). No wonder Ailes hates them! Boy, when I think of all these decades of hearing about Koreans, the good immigrants. But the couple was driving a Prius. So here's the Ailes takeaway: “Damn it, though, I was kind of glad that it was a Prius.” What a gentleman, a round of applause.

Noonan moment. Peggy Noonan wrote in her column at the Wall Street Journal that the president is thinking up ways to harm the country and make its people suffer. This has to do with the sequester. “He runs the federal agencies,” Noonan says, meaning President Obama. “He can decide on a steady drip of catastrophe—food inspectors furloughed on the 15th, long lines at the airport on the 18th, sobbing children missing Head Start on the 20th, civilian contractors pointing to a rusting U.S.S. Truman on the 25th.” That “food inspectors” is a hit. People die when food isn't inspected properly.

Noonan doesn't argue for her view. Instead she assumes it (“you have to assume that’s the plan”) because everybody knows Obama is bad. Like Ailes, she has her own Wide and Easy version of the universe. I remember summer 2011, when Obama took off for a vacation at some rich people's spot. Noonan had a vision of a beaten Obama, a man giving up on the presidency. She flashed on him coolly folding his napkin and telling his advisers he'd go to Martha's Vineyard, never mind the public. “If they want this job so much,” her Obama said, “let them have it.”

Noonan got in that he said the above “in a clipped, well-modulated voice.” Now here we are, and Obama is messing with food safety and making kids cry. It's all so real to her.