Obama’s Hurting Democrats by Negotiating With Himself on Economy

Paul Ryan’s slash-and-burn budget is reactionary, but the President isn’t fighting back. 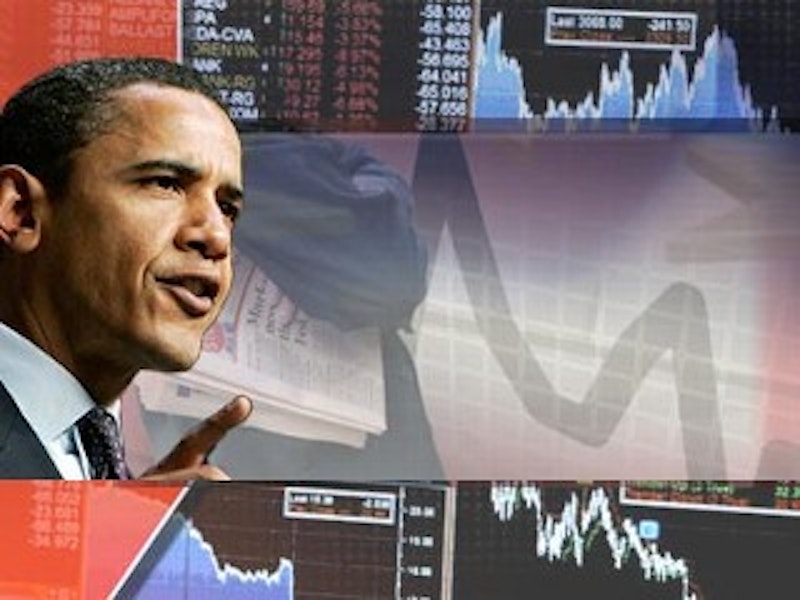 Who would you rather trust with the nation’s economic policy—a Nobel laureate from Princeton University or a congressman who learned his fiscal policy from a novel he read in high school or college? Or maybe President Obama, who’s willing to surrender the Democratic franchise in exchange for more taxes? Or how about Senate Democrats who want to protect entitlements but raise even more taxes from the wealthy? Or even the newest entry, Pope Francis, who champions the poor and rails against the world’s disparity of wealth?

Take your pick. If anything at all emerges from the current protocol standoff in Washington—and the cherished “grand bargain” is doubtful—it’ll probably be a medley of all of the above. For as long as House Speaker John Boehner (R-OH) is hostage to the death-wish Tea Party wing of the GOP, Congress and the White House are unlikely to see eyeball-to-bankroll.

Rep. Paul Ryan (R-WI), chairman of the House Budget Committee, is back for the third reprise of his slash-and-gut budget. He still hasn’t realized that he and Mitt Romney lost the election. Ryan read a book or two in his younger days—The Fountainhead or Atlas Shrugged, or both—two of the clunkiest novels on the library shelf. He is now trying to convert author Ayn Rand’s philosophy of Darwinian self-interest into a national economic policy that only he embraces. Ryan fancies himself as a mesomorphic Galt.

There’s very little new in Ryan’s latest attempt for government to dispossess the poor and the sick. His devastating program is as simple as reward the rich and punish everyone else. He would repeal Obamacare and yet retain the $715 billion the program saves in order to achieve his goal of wiping out deficits by 2023. What his calculus doesn’t admit is that the deficit is plunging dramatically without his help.

Ryan would convert Medicare to a voucher system and virtually eliminate Medicaid, the health program for the poor. His ultimate goal, though, is to privatize Social Security. Other programs for the elderly, the poor and young people, even infants and children, would be cut to the leanest bone. Ryan’s 91-page proposal would also repeal the Wall Street reforms that Obama signed into law three years ago.

True to Republican orthodoxy, Ryan’s budget scheme would protect the Pentagon from spending cuts. And, here comes the kicker, Ryan would reduce the top tax bracket from 39.6 percent to 25 percent and the lower bracket to 10 percent, a disproportionately large tax cut for the wealthy at the expense of everyone else.

When he first proposed almost the identical budget three years ago, Ryan, a Roman Catholic, was sharply criticized by the conference of American Catholic Bishops for being so callous toward the poor. But screwing others is the very core of Ayn Rand’s—and hence Ryan’s—philosophy and that is what so impressed Ryan in his youth. (It should be noted that Ryan had the good fortune to marry a woman who inherited $6 million in trust funds.)

So it is all the more relevant now that Pope Francis, taking his name and his mission from St. Francis of Assisi, is the newly acclaimed universal ambassador for the poor, the underprivileged and the misbegotten. And it will be interesting to see if the freshly invigorated American Catholic hierarchy intensifies its already aggressive ministry to the poor and its criticism of Ryan’s budgetary lunacy. There is widespread agreement that Ryan’s budget was toe-tagged on arrival.

Paul Krugman is a Princeton University Nobel Laureate and a New York Times columnist who regularly chastises what he calls “deficit scolds.” Krugman argues from the Keynesian view—precisely the opposite of Ryan—that short-term deficits are not the problem because interest rates are virtually non-existent and government borrowing costs almost nothing. In Krugman’s view, a lack of jobs and growth as well as demand are what ails the economy and the worst possible solution is to impose austerity in the form of severe budget cuts as Ryan suggests. Krugman advances the antidote to Ryan’s argument of deconstructing government that spending is also part of the problem: there’s too little spending, not too much.

Krugman views Ryan’s budget as a “cruel joke” and not serious policy. “The good news is that Mr. Ryan’s thoroughly unconvincing policy-wonk act seems, finally, to have worn out its welcome,” Krugman wrote in The Times. “In 2011, his budget was initially treated with worshipful respect, which faded only slightly as critics pointed out the document’s many absurdities. This time around, quite a few pundits and reporters have greeted his release with the derision it deserves.”

Senate Democrats, on the other hand, represent the liberal wing of the Democratic Party. They are upset with Obama’s willingness to negotiate cuts to social programs, especially Social Security. The Senate’s budget proposal, unveiled by Budget Chairman Patty Murray (D-Wash), is generous in that raises more taxes than Obama’s plan and does the least damage to the social safety net. Still another budget rendition by the Congressional Progressive Caucus would raise the top tax rate to 49 percent, the highest since the Carter years.

Caught somewhere among the competing programs, proposals and ideologies is Obama, who has turned on a charm offensive but has yet to release a detailed budget proposal of his own. Obama has dined with Senate Republicans at a luxe Washington hotel and traveled to Capitol Hill to meet separately with both parties on their home turf.

What has Democrats miffed is Obama’s willingness to negotiate cuts to Medicare and a revision of the CPI that determines increases in Social Security benefits in exchange for more taxes. Social Security has nothing to do with the deficit or the debt. It is a self-sustaining fund that is paid for by employers and employees. To emphasize the hardened standoff, House Republicans are adamant that there’ll be no more new taxes.

Sorry to say that Obama, in his grope for the grand bargain, is not known for his negotiating skills even though he has become more aggressive since his convincing reelection. More often than not he negotiates with himself. Nor does there appear room for compromise. Thus, in the current circumstance, Democrats are the victims of friendly fire. Obama has his own party members arguing among themselves. And adding to the clutter, the Democratic leadership in Congress has agreed to join the president in his sell-out, much to the consternation of progressives.

One school of thought believes that Obama’s smile-and-Stiletto approach to Republicans is all about visual impressions: he leaves the folks in the precincts believing that he is willing to compromise but that the recalcitrant GOP is the roadblock to progress. This, as the thinking goes, is all a set-up for Democrats to recapture the House in 2014 by running against a do-nothing Congress. Democrats need 17 seats for a take-over. (At the same time, Democrats risk losing the Senate because of resignations and other departures.)

However, Republicans might have the advantage in the battle of deficits, debt and budgets. Recent polls show that public confidence in Obama’s handling of the economy has slipped to the edge of the danger zone, the magic line of 50 percent. Republicans could be viewed as the party that is willing to solve the nation’s long-term fiscal problems while Democrats are stuck with the tax-and-spend hex sign.

But there is another kind of arithmetic working against a House takeover by Democrats—Congressional redistricting. Democrats control population and Republicans own geography. Democratic voters are being increasingly packed into urban districts while Republicans claim suburban, exurban and rural areas.

Republicans control 30 governorships and a majority of legislatures where Congressional districts are drawn. As an example, Michael Dukakis, who was trounced for the presidency, carried more than 800 counties in 1988. And Obama, who won in 2012 by a majority of more than five million votes and 335 electoral votes, carried only a few more than 600 counties. Politics and economics toddle hand-in-hand except when they diverge in their separate ways as seems to be the case with Obama’s evanescent grand bargain.