Both are aimed at preserving life by limiting instruments of death. 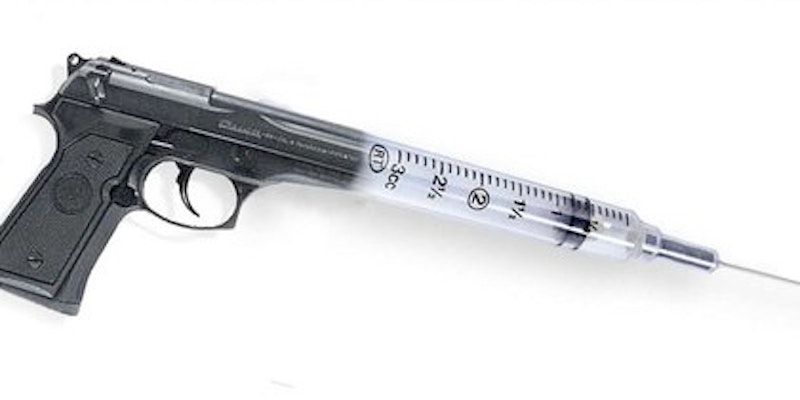 There’s a wry symmetry to having gun control legislation and the death penalty repeal bill advancing through the Maryland General Assembly simultaneously. Both are aimed at preserving life by limiting instruments of death.

The politics of life and the life of politics in the General Assembly are a toxic mix of the Second Amendment, the Old Testament, religious beliefs, personal experience, the ballot box and, above all, enlightened self-interest. The sum total of all of the above forms the heart of the debate over guns and lethal injections.

The fragile arguments for preserving both have collapsed under the weight of logic, fact and timing. If capital punishment is a deterrent why are there so many killings and other heinous crimes in America? And if an armed society is a polite society, as the NRA likes to say, America would be the safest nation on earth. The FBI estimates that there are 300 million guns in circulation yet 31,000 people die every year in gun-related incidents. And why, it is fair to ask, did the NRA maneuver a bill through Congress that forbids federal research into gun activity that might contradict its propaganda?

Gun control has become the source of its own momentum. It took the carnage of Newtown, CT, and the slaughter of 20 innocent children and six teachers by a crazed gunman with an AK-15 automatic weapon to force gun control onto the national agenda. So far, there has been more action by states than at the federal level although a consensus is building in Congress for, at the least, mandatory background checks.

There are four bills pending in the U.S. Senate where a committee has already approved a bill making gun trafficking a federal crime. (President George W. Bush allowed the federal ban on the sale of assault weapons to expire in 2006. The ban is being reprised in the four-bill package.)

Gun control and capital punishment have been around Maryland since the 1970s—gun control since 1973 and the death penalty since it was reinstated by the Supreme Court in 1976.

The only thing that stops a bad guy with a gun is a good gun control law. Maryland’s gun control law was originally proposed by Frank Conaway, then a delegate and now clerk of the court in Baltimore, as an attempt to curtail black-on-black shootings in Baltimore’s inner city. At the time it was enacted, it was considered the strictest gun law in the nation and served as the model for the equally stringent Massachusetts law. (New York’s Sullivan Law is the nation’s oldest. Enacted in 1911, it was proposed by a political hack, Timothy Sullivan, as a way for Tammany Hall to control the flow of gun permits by awarding them to friends and loyalists and denying them to those outside the political organization.)

This time around, the NRA has made a grievous strategic blunder. It has resisted any compromise or give-and-take at the federal level and by that intransigence has forced action on many fronts among the states. So instead of fighting one battle in Washington, it has lost battles in several states already with legislation pending in others, including Maryland.

The Second Amendment is a sacrosanct shield to the NRA. But the Supreme Court has ruled otherwise. The court has held, in Heller vs. The District of Columbia, that the Second Amendment, as all the others, is subject to exceptions and that guns can be regulated. The First Amendment, for example, guarantees free speech but that does not entitle a person the right to stampede a crowd by yelling fire at an indoor rock concert. Still, there is a reverence and a misunderstood passion for the Second Amendment that is not bestowed upon the other 26. Thousands of people showed up in Annapolis, some camping out as early as seven a.m. for the 16-hour hearing on the gun control bill that lasted until three a.m. the next morning.

The NRA is also experiencing internal strife because of its rigid position against any change whatsoever in existing gun laws. One of its major allies, the National Shooting Sports Foundation, is breaking with the NRA over the issue of federal background checks, according to reports. The NSSF represents the nation’s leading firearms manufacturers who sell guns to police and public safety departments in major cities and whose mayors and police chiefs support stricter gun control laws. The rules of politics are the rules of the marketplace.

In Maryland, Beretta, the Italian gun manufacturer whose major American factory is in Accokeek, in Prince George’s County, has said it would consider relocating its facility if the state tightens gun control laws. The Beretta pistol is the standard firearm for many police departments in Maryland.

The death penalty has been used sparingly in Maryland. It had been suspended by Gov. Parris Glendening (D) and later reinstated by Gov. Robert L. Ehrlich Jr. (R), who signed the state’s last execution order. Capital punishment has been effectively eliminated by Gov. Martin O’Malley (D) in a three-way standoff over protocols involving the Court of Appeals, the General Assembly and the executive branch. The five men on Maryland’s death row would not be affected by the repeal legislation in progress.

Repeal of the death penalty has long been a goal of O’Malley’s and not his first attempt to end the practice. O’Malley had the support of his own Democratic party, some of whom have come late to the issue, as well as the perennial support of the Catholic Church. But this time he was under heavy pressure from the NAACP, which lobbied the Governor as well as the legislature to abolish the law once and for all. The NAACP has argued that the death penalty is disproportionately applied to blacks. On the emotional side of the issue, many legislators have been swayed by the prospect of condemning a wrong person to death.

O’Malley, a former prosecutor, has made his case by arguing that the death penalty is ineffective and a waste of resources. A study conducted several years ago found that the state had spent $4 million defending death penalty cases over a specified period of time.

What’s more, the appeals process can consume as many as 20 years before it’s exhausted. And even then more reviews and delays eat up time before a decision is made on whether to sign a death warrant. Simply put, the way the death penalty is applied in Maryland (and America) doesn’t work.

The death penalty repeal bill passed the Senate 27-20 and is now before the house where its advocates are confident they have the votes for Maryland become the 18th state to end capital punishment. The House Judiciary Committee has approved the repeal 14-8.

Gun control and death penalty repeal are perfect companions. As the NRA likes to say, guns don’t kill, people do. Yes, but they do it with guns. And rarely is a shooter put to death for the crime of murder.