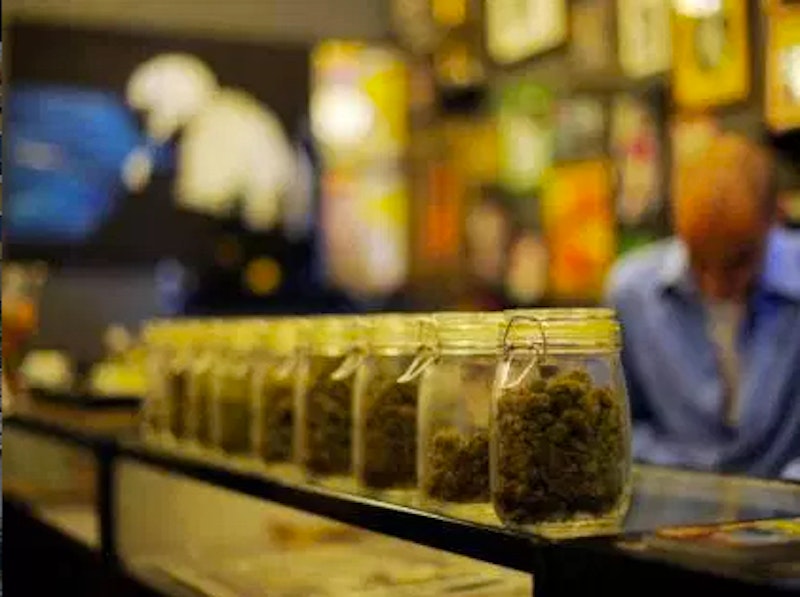 Participating in nationwide “4/20” pro-marijuana celebrations a day early might have helped me cope with 4/19, which was primary voting day here in New York.

After I fed my completed ballot into the machine, it announced “Ballot Jam. Your ballot was NOT counted. Contact poll worker,” leading to a couple minutes of well-meaning poll workers undoing the jam, fretting about laws that said the workers observing such a repair should be of two different political parties, and then shrugging off the fears of one poll worker that one observer was not a Republican with the observation that at least she had a Republican nametag. Democracy! I have no complaints about the helpful poll workers, though.

Conservatively inclined though I am in some ways, I think today’s pot demonstrations may well be a more direct and saner celebration of freedom than yesterday’s ritualized lever-pulling theatrics. Today’s demonstrations may even affect policy. Already, my biologist friend Jake Harrison informs me, many cities are realizing, like cigarette-taxers before them, that extracting big payoffs from law-leery marijuana dispensaries can be a great source of revenue. I suspect that’ll be enough to cement legalized pot in law. Not that I want the state to have revenue, mind you, but the parasitic state prefers not to kill its host outright once it latches onto a big one.

Holding the primary on 4/20 might’ve put New Yorkers in the proper state of mind to appreciate Donald Trump’s primary-eve election gaffe (unless he was taking the planned outrage media-baiting tactics to a whole new level), namely referring to 9/11 as “7-11.” It almost makes sense sober, and stoned: we might well suspect the key to understanding our entire politico-economic system lies in that one verbal slip.

I mean, what is Trump at heart if not a franchise-store-managing kind of guy, right? People look down their noses at 7-11, just as they look down their noses at Trump supporters, but I believe he’d be truly outraged if a 7-11 were destroyed and would fight to save it. 7-11 is America, even with Pakistani immigrants running the place, assuming they don’t have nefarious intelligence ties. 7-11 is also a place people normally talk about after 4/20, not two days before. After, it sometimes becomes essential. Imagine if there were never food again. No, don’t think like that. There will be food. There will.

The last time I was in a room full of pot enthusiasts, actually, a very pale, white, alternative-right anti-feminism advocate ended up bonding with a black anti-welfare conservative and thereby surprising a room full of Democrats who were all hosted by a Noam Chomsky fan—after I’d worried unnecessarily I’d have the oddest politics in the room. All this, too, probably makes more sense to some people on 4/20 than on other days, and some mental limbering-up is probably a good thing. It might enable us to see a way out of the whole system.